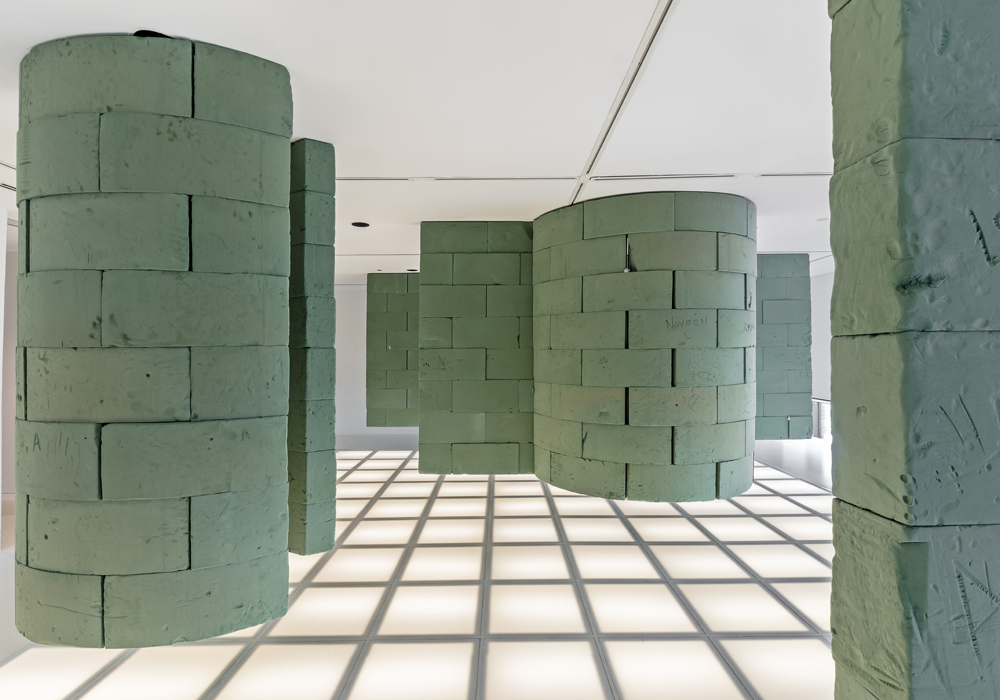 Art collectives are committed to notions of radicalism. This most frequently manifests itself in a kind of adversarial curatorial framing: collectives are opposed to the market, to institutions, to anything that might stick. We can trace this (of course) to earliest iterations of conceptualist artist collectives, when the form itself claimed to wield anti-establishment heft. When Art & Language, Group Material and their peers first formed in the late 1960s and ’70s, notions of collectivity and collaboration were not fully subsumed by corporate interests. We are well beyond this now. China’s state capitalism and Google’s hive-mind office pods should put to rest any clear-cut associations between collectivity/collaboration and the inherently virtuous. Yet, in the art world, the earliest hopes and dreams for the collective (with all of its moralizing baggage) live on. Such was the case with this year’s summer exhibitions at the Power Plant in Toronto.

In several of these shows, collaborative expectations extend beyond the artist collective and involve the audience as well. While collectives can happily enforce their own parameters, collaboration that explicitly involves the audience has fewer luxuries. In The Mouth Holds the Tongue, a project by Toronto artists Nadia Belerique, Lili Huston-Herterich and Laurie Kang, multiple walls, both curved and straight, hang from the ceiling. They have been constructed from large blocks of Oasis, the green foam used in floral arranging. This is material you want to touch. The artists obviously understand this, and have traced cartoonish lips onto the blocks and inserted small, hand-moulded sculptures (reminiscent of Kang’s past work in shows such as “Deferring Diffractions” at 8-11). It’s fine and well, if a little straightforward. Perhaps if it were viewed as an esoteric architectural experiment, the project could be evaluated on strictly formal terms. The Mouth Holds the Tongue, however, wants more.

The curatorial text claims that the show “offer[s] temporality as a visceral means of organizing individuals non-hierarchically,” implicating “the curator, the institution, the viewer and the space of the gallery itself.” Touted as collaborators, viewers are referred to as the tongue to the mouth, while “artists’ choice of construction materials themselves evoke [sic] possibilities for growth and activity to occur.” It looks like visitors took their role seriously, adding their own inscriptions such as “SQUIRT” and “Bob” on the bricks. When I visited, however, these additions were unwelcome. “No touching in the installation on the second floor,” noted the attendant at the front desk, while another was positioned at the installation to guard against further additions.

Perhaps the artists anticipated the visitors’ additions. Even if we assume they did, and are tempting visitors into disobeying the gallery’s guidelines, the project still amounts to little more than inside baseball. For viewers afraid of disregarding the gallery rules, collaboration consists of walking through and looking. For those brave enough (or in-the-know enough) to transgress, the space’s hierarchy remains unchanged: the artists have defined the terms of engagement, predicting some minor transgression, and the gallery enforces their parameters.

Elsewhere at the Power Plant, curatorial texts and didactic panels do a similar disservice to their respective exhibitions, all of which are by collectives. (There is one additional summer project, (art)work(sport)work(sex)work, that I can’t address here because I was unable to participate in its iterative programming.) Insisting upon the radical potential of collectives, the texts make deeply tenuous, possibly irresponsible, assertions. Throughout, collectives are de facto instruments of opposition. Belerique, Huston-Herterich and Kang battle the white cube and hierarchies; Bik Van der Pol tackles environmental degradation; Tercerunquinto faces off with mining and resource extraction. The litany of issues feels rote, dull.

Bik Van der Pol pairs a custom-made carpet, bearing a vaguely camouflaged pattern and the backwards names of species, with a grid of mirrors hanging from the ceiling in Eminent Domain. A soundtrack of chirping and rustling plays within the room. The species listed on the carpet (readable through the ceiling’s mirrors) are all extinct, while the soundtrack collects Dr. Bernie Krause’s recordings of “healthy habitats in Borneo, Costa Rica, Sumatra and Zimbabwe from the 1990s.” The installation, according to the accompanying didactic panel, “turns abstract data into a physical experience,” but, stripped of all context, the resulting experience feels deeply passive. The audience is implicated insomuch as they are visible within the mirror. Reflections are not equivocal with concern, though, and, as with The Mouth Holds the Tongue, the audience involvement feels more like lip service than meaningful connection. Given the deeply obtuse, remote outcome of the project, perhaps the most efficacious environmental approach would have been, quite simply, not to make the work at all. Forgo the off-gassing carpets, shipping fumes and production resources. Within Bik Van der Pol’s aesthetics of administration, extinction is emptied of all its urgency. Eminent Domain amounts to social cause as strategy.

In Mine, Mexico City–based collective Tercerunquinto cut a hole into the gallery’s cement floor. It’s a simple, largely predictable, gesture, leaving the curatorial text to grab onto the double meaning of the title (it functions as both a possessive and a noun), and unconvincingly invoke issues of Indigenous rights. How Tercerunquinto, who to my knowledge have never evinced any sustained engagement with Canada’s or Mexico’s Indigenous peoples, are now dabbling in questions of Indigenous land rights goes unexplained. It’s glib at best, damaging at worst. A small mercy—viewers are not asked to participate.

Curiously, the installations and their texts both overreach and reduce. Each seems boiled down to its socially relevant subject matter. There’s an overly instructive, vaguely prescriptive feel to all of this. Perhaps it’s curatorial overcompensation. Each of the installations is decidedly cold, and it feels as though the didactic panels and accompanying materials attempt to make up for this lack, desperately carving a way in for viewers where there is none. But this interpretative hand manages to overlook the shared architectural concerns, art-historical references and other points of interest in favour of blithely noncommittal political posturing that makes the work more distant, not less.

The failure of these shows ironically demonstrates the necessity of collaboration, especially on an institutional level. Inexplicably, the Power Plant’s assistant curator, Julia Paoli, has been single-handedly left to organize all of the summer exhibitions (each a newly commissioned project), while management continues their revolving door of gallery staff. This is not a situation exclusive to the Power Plant. Top-down gallery structures relying on a clearly defined, singular authority frequently present shows singing the praises of the participatory. Wouldn’t a more convincing investment in collaboration involve distributing managerial power, or sufficiently supporting and empowering curatorial staff? This disconnect might not be hypocritical, but it certainly leaves the projects ringing hollow. There is plenty of collaboration within the art world, but it’s rarely found where it’s needed most.