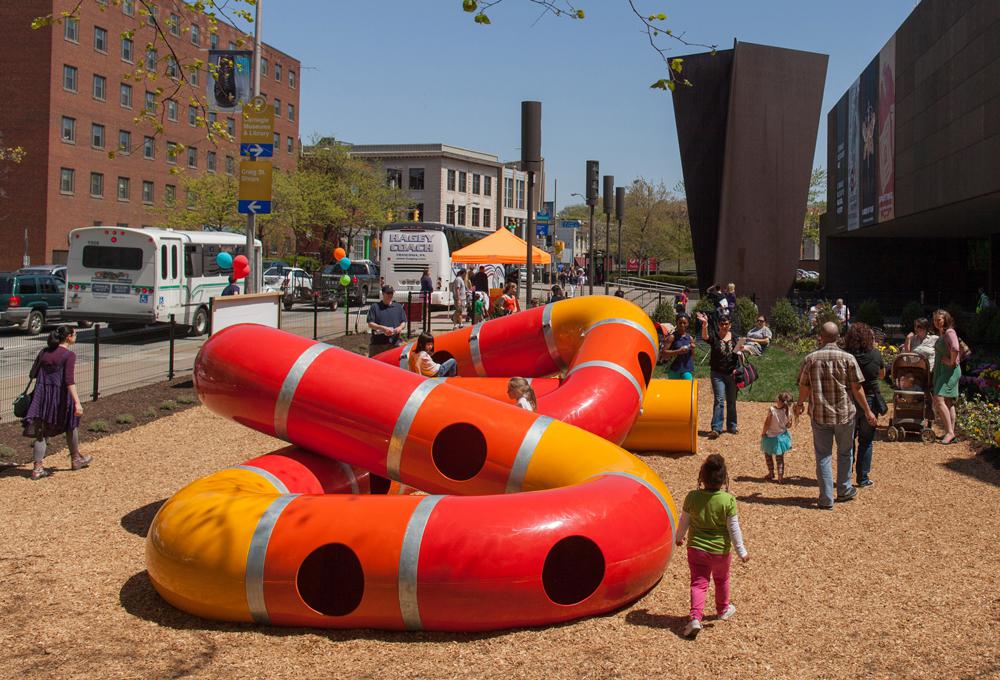 There’s something simple, but quite extraordinary, about the 2013 Carnegie International. It hits you even before you enter the exhibition at the Carnegie Museum of Art in Pittsburgh. Installed in a grass- and woodchip-floored enclosure in front the looming concrete facade of the museum is a Lozziwurm, a twisting playground structure designed in 1972 by Swiss artist Yvan Pestalozzi. Sitting empty, the Lozziwurm passes nicely as a public artwork. Picture an infinite loop of brightly coloured tubing, broken and collapsed onto itself, and you have a sense for the object’s wry sculptural presence.

It’s also hard to miss the neat counter-balances set between Pestalozzi’s snaking polyester tunnel and two other nearby site-specific sculptures. The dramatic verticality of Richard Serra’s Carnegie (1985), with its strict phalanx of massive leaning steel slabs, presides over the front entrance to the museum, contrasting with the rounded arch-symmetry of the Lozziwurm. Veteran British artist Phyllida Barlow’s monumental TIP (2013) involves lengths of bright fabric streamers that fasten together a sprawling logjam of wooden poles and hint at Pestalozzi’s colourful Lozziwurm. The chaotic rhythm of her barricade-like work stands in stark contrast to the clean lines and pre-fab forms of the Serra and Pestalozzi, manifesting both the forceful obstruction of Carnegie and the curious invitation of the Lozziwurm to channel viewers into the exhibition.

Yet despite these clever formal coherencies, what seems most remarkable about Pestalozzi’s sculpture is to witness it in action. It is, after all, meant for the playground (there are more than 100 Lozziwurms installed across Europe; this is the first in the US). On any given day, the Carnegie’s Lozziwurm becomes a hive of activity as children climb, slide and disappear into the structure’s bending tunnel. Parents with strollers come and go, standing around the enclosure chatting. No longer anchored to its static form, the Lozziwurm becomes a hub of social interaction, a dynamic template for endless perceptual exploration and narrative possibilities. A straightforward gesture, one might argue, but no less than radical considered in context: Here is a work open to all and with no overbearing pretensions or restrictions fronting one of the most august institutions and prestigious exhibitions of contemporary art in the world. Whether the Lozziwurm is a clever conceptual sculpture or not doesn’t really seem to matter to a variety of kids and their parents—the important thing is to play.

Indeed, this notion of free play and accessibility grounded in the local community—dovetailing with a sweeping desire to upend the institutional norms of large-scale international contemporary art exhibitions—is the driving force behind the 2013 Carnegie International. “We love art because it is a troublemaker that changes our thinking and even our lives,” write curators Daniel Baumann (director of the Adolf Wölfi Foundation in Basel), Tina Kukielski (formerly of the Whitney Museum of American Art) and Dan Byers (curator of modern and contemporary art at the Carnegie) in the exhibition’s catalogue. “Many assume that museums are boring, stiff, conservative warehouses of yesterday,” they continue. “But we argue that they are important actors in the world, upholding memory and writing history, and acting as vital public sites for exposure, discourse, pleasure, and confrontation in the urban fabric.”

These curatorial ideals are worth keeping in mind, especially when it comes to considering the historical weight of the Carnegie Museum of Art and Carnegie International. Founded in 1895 by steel baron Andrew Carnegie, the museum was envisioned from the outset as a collecting institution that would bring the “Old Masters of tomorrow,” as Carnegie famously put it, to a local audience. The series of art exhibitions—now known as the Carnegie International—that began the following year have remained a cornerstone of the museum’s strategy ever since, establishing it as a pre-eminent venue for modern art from the late 19th century onward. The Carnegie’s international exhibition (which currently runs every three to five years) is second only to the Venice Biennale in terms of longevity.

A heavy institutional shadow is perhaps why Baumann, Kukielski and Byers spent so much time outside of the museum when putting together their exhibition. Over the past three years, the trio literally embedded themselves in the urban fabric of the local art community. Kukielski and Baumann moved to Pittsburgh, and the trio rented an apartment in the city’s Lawrenceville neighbourhood to serve as a kind of satellite research/event space that hosted screenings, performances and presentations (and parties) by local artists and visiting international artists included in the Carnegie International. They got to know the community and the community got to know them. What’s more, they write, “We discovered Pittsburgh’s dive-bar culture…and decided to bring some of its spirit to the global art world.”

So what does this all add up to? For the exhibition, the trio has assembled works by 35 artists from 19 countries that spill across the museum, filling two floors of galleries and also selected hallways, stairwells, cloakrooms and outdoor spaces. In a bid to reconnect institutional past and present, they’ve rehung eight of the museum’s contemporary and modern art galleries, with highlights from the Carnegie International’s history interspersed with new works from the 2013 edition. (The pairing of former CI artists Peter Fischli and David Weiss’s videos Büsi (Cat) (2001) and Hund (Dog) (2003), for instance, adds a witty touch here, as does the placement of Alberto Giacometti’s Walking Man I (1960) next to one of Rodney Graham’s contributions to this year’s exhibition, the photo diptych The Pipe Cleaner Artist, Amalfi, ’61.) And off-site, at the Braddock Carnegie Library (the first Carnegie library in the US), Pittsburgh art collective Transformazium (Dana Bishop-Root, Leslie Stem and Ruth Stringer) have permanently set up an Art Lending Collection, a rotating selection of works by artists in the Carnegie International and otherwise for loan to anyone with a library card.

It’s a lot to take in, and for me it was only after a second careful run through the exhibition at the museum that the curatorial undercurrent truly began to surface. This is a deeply humanist affair. Baumann, Kukielski and Byers have spared no effort in putting themselves and their exhibition into the community. But they’ve also played with the status of the museum itself, opening the doors (and most other spaces) of the institution to invite a real and meaningful engagement with the space and its international exhibition. It is a show that does not pivot on privilege and prestige, but draws its rationale from a thoughtful activation of the common ground of everyday social life—and, in turn, everyday political life, too.

This focus on the everyday can generate a sense of empowering reality in some instances. Johannesburg photographer Zanele Muholi (who, incidentally, completed her MFA at Toronto’s Ryerson University in 2009) is represented with the monumental black-and-white portrait series Faces and Phases (2007–13), which documents the resilient gazes of South African black gay, lesbian and transgendered people. Saigon artist Dinh Q. Lê’s collects trenchant and poetic watercolour sketches and drawings by Vietnamese people who served as soldiers during the Vietnam War, displaying an array of them alongside a related documentary. Philadelphia artist Zoe Strauss shows portrait-studio snapshots of hopeful residents of Homestead, Pennsylvania, a community indelibly linked to the ruins of industrial empire and labour strife.

Yet this grounding in the mundane can also reveal the extent to which fantasy dominates our contemporary society. Take, for example, the constructed illusions in New York artist Taryn Simon’s Birds of the West Indies (2013), a serial taxonomy of vehicles, weapons and women (photographed both then and now) taken from three decades of James Bond films. The encyclopedic (and likely imaginatively fabricated) storyboard and landscape drawings of prolific American outsider artist Joseph Yoakum, who claimed to have travelled the world “four times over,” also speak to this theme, as does an aggressive reanimation of media images from Iran’s 2009 demonstrations created by exiled Iranian artist Rokni Haerizadeh. The possibility of building an earthly utopia comes into question repeatedly in New York photographer Joel Sternfeld’s Sweet Earth series (1982–2005), as well as in Israeli-born artist Yael Bartana’s video installation Summer Camp (2007).

Still other works directly interrupt the embedded hierarchies of institutional history and power. On the floor of the museum’s two-storey Hall of Sculpture (which was designed after the inner hall of the Parthenon using marble from the same Greek quarry), Mexico City artist Pedro Reyes has assembled an array of musical instruments fashioned out of weapons confiscated from the Mexican drug war. Intermittently clanging and chiming, they offer a discordant counterpoint to the space’s harmonic intentions. The aesthetic dissonance continues above on the surrounding balcony with a suite of exaggerated figurative sculptures (one texting on a plaster smart phone, another sprawled out on the ground having a nap, among others) by French-born, New York–based artist Nicole Eisenman. Set alongside a career-spanning selection of her neo-expressionist paintings, the installation—which garnered Eisenman the exhibition’s Carnegie Prize—surely mocks the hall’s permanent display of plaster-cast Greek and Roman sculptures, but also finds a relational foothold in their classical forms. You can’t see either Eisenman’s works or the ancient figures the same way again. One gets the sense that her sculptures are the embodiment of the curators’ ideal of art as “troublemaker.”

In the end, though, the Carnegie International returns to the playground. Just off the Hall of Sculpture in the museum’s Heinz Architectural Center is the micro-exhibition “The Playground Project.” Organized by guest curator Gabriela Burkhalter, the plywood- and poster-lined space offers a fascinating overview of mid-to-late 20th century playground design in Europe, Japan and the US through archival photos, videos and models. From the pioneering ingenuity of Scandinavian “junk playgrounds” in the 1940s (micro-societies which often involved up to 100 children and included animal husbandry and an adolescent version of consensus government) to the modular sci-fi play sculptures of the late 1960s and 1970s (including a subterranean playground designed by the French collective Group Ludic), these were sites of high-concept design and spontaneous social dynamism embedded in the everyday.

If you’ve spent any time in the rigidly standardized playgrounds of today, it’s hard not to wonder where all those good ideas went. “The playground is a hidden place,” Burkhalter writes in her catalogue text on the project. “Yet it is, just like the museum, a domain in which opinions about education, exploration, aesthetics, and public space abound….Maybe playgrounds are simply outdated? Or maybe it is time to reevaluate their role in contemporary society?”