Neïl Beloufa, “The Unfinished Conversation” and Pascal Grandmaison make Bryne McLaughlin’s list of highlights from the past year. 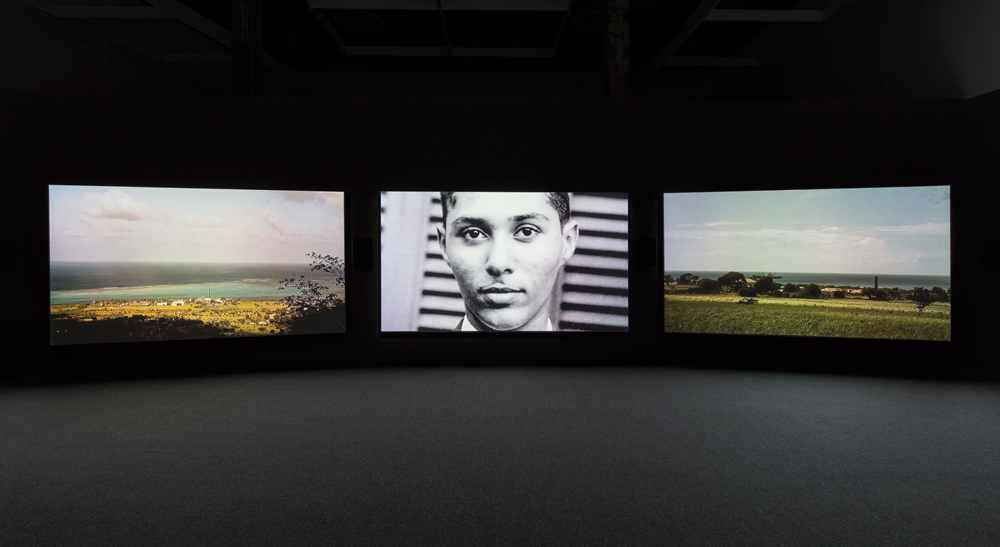 1. “Counting on People” at the Walter Phillips Gallery, Banff

A pandemic runs rampant while charlatan scientists offer a snake-oil cure for a price; hawkish citizen-presidents arbitrarily declare war across continents; love and desire are dysfunctional illusions—and it’s all being carefully mediated by the ever-present networks of digital control. None of this is per se “real”; these are all scenarios concocted by Algerian-French artist Neïl Beloufa for his solo exhibition “Counting on People,” which opened the year at the Banff Centre’s Walter Phillips Gallery. But, when it comes right down to it, Beloufa’s exaggerated paradigms of 21st-century connection and disconnection come closer to reality than most of us would probably like to admit.

The exhibition itself (a complementary version with a similar array of works showed in late 2014 at the ICA in London, UK, which co-commissioned two of the works with the Walter Phillips Gallery) was a study in complex contrasts. Consisting of four main pieces and an assortment of impromptu sculptural arrangements (including the many Lucky Strike cigarette packages left over from the installation in Banff), the gallery’s single-room space was packed with a kind of helter-skelter collision of forms, sounds and images. In one corner a widening framework of video projection surfaces spilled out across the gallery floor for the contagion paranoia of Home Is Whenever I’m With You (2014). A large moving wall nondescriptly fashioned from fiberglass into the shape of a dinosaur slowly tracked back and forth across the centre of the gallery, carrying with it a projection of Beloufa’s global endgame World Domination (2012). Nearby, an array of fence-like metal armatures stood next to a window-display installation cut into a corner wall for Data for Desire (2014), one of two video works commissioned for the exhibition where the increasingly drunken dramas of a group of twenty-somethings at a backyard BBQ in Banff are statistically analyzed (equations to determine which of the beer-fuelled romances will work, and which will not, for example) by a group of bemused Parisian math students. There were monitors, office swivel chairs, peacock feathers, ceramic pieces, foam rubber, CCTV cameras, a mirror, and on it went. “I’m not a sculptor, I’m an editor,” Beloufa has written. “I edit in videos and I edit in sculpture and I edit in space; I construct meaning by relation. A work isn’t the actual object but the relations I have built with it.” The result of those relations in Banff was a beautifully sinister chaos.

2. “The Unfinished Conversation” at the Power Plant, Toronto

“The Unfinished Conversation: Encoding/Decoding” was a tough exhibition. For one thing, to see it properly took time, a lot of time: there were roughly nine hours worth of video in total spread out between five installations (plus a commissioned photo project) that ranged in length from 19 minutes to more than five hours. This was not a show to drop in on; it was a show to drop in to.

This was also an exhibition that demanded thought. “The Unfinished Conversation: Encoding/Decoding will examine the physical manifestations and the mind-set of specific visual dynamics on the post-WWII era,” write curators Gaëtane Verna and Mark Sealy in the exhibition text, “and it will address itself to the ways in which the image and the archive, whether personal or national, have influenced the way the subaltern perceive themselves socially and historically.” That’s a roundabout way of saying that this is a show about the 20th century’s troubling legacy of unrest and upheaval that reached a critical mass in the 1960s, and in many respects continues today. The civil rights movement, the Vietnam War and post-colonial Africa were all parsed by the tandem emergence of mass media in a volatile mix of revolutionary empowerment (i.e., the subalterns) and the scrambling fear of the old-guard status quo.

In some of the works, history and the archive were pointedly confrontational. Take, for instance, the anxious sensory overload of Terry Adkins’s video Flumen Orationis (from the Principalities) (2012)—which overlays vibrating archival images of launching and crashing military dirigibles with Martin Luther King’s 1967 speech “Why I Am Opposed to the War in Vietnam” (“The hottest places in hell are reserved for those who in a period of moral crisis maintain their neutrality.”) and Band of Gypsy’s (featuring Jimi Hendrix) epic protest jam “Machine Gun”—or the seemingly endless paranoid scrutiny of Steve McQueen’s End Credits (2012), a 322 minute scrolling projection of thousands of heavily redacted pages from singer, actor and civil-rights activist Paul Robeson’s FBI surveillance file.

In others, a more subtle, but no less potent, narrative of the inherent ebb and flow of power, memory and identity unfolded. Zineb Sedira’s three-channel video installation Gardiennes d’images (Image Keepers) (2010), Sven Augustijnen’s film Spectres (2011) and John Akomfrah’s monumental three-screen video projection The Unfinished Conversation (2012) (which, with its focus on the life and work of cultural theorist and new left activist Stuart Hall, was for me the highlight of the show) each documented a coming to terms of sorts with the personal injustices and collective quagmires of a Western colonial past (respectively, in French Algeria, the Belgian Congo and Jamaica/England). In all of these cautionary tales of colliding histories and politics, the imbalances of society and culture, and the overriding tension of “the other” from half a century ago, the simple question remains: In the current era rife with racial violence, xenophobia, guerilla terrorism and the tragic implications of unprecedented global conflict and mass migration, what have we learned? It’s an unfinished conversation, indeed.

Montreal artist Pascal Grandmaison’s latest large-scale video installation La vie abstraite (2015) opens with the close-up image of a square sheet of photographic paper slowly drifting and turning in the midst of a torrential downpour. On one side, the square is a fathomless black; on the other, the blasted image of the sun. For Grandmaison, it’s an allegorical lead that links back to the Russian painter Kazimir Malevich, whose proto-abstract Black Square (1915) painting (itself an interpretation of an earlier theatre-set design where Malevich created a black screen to absorb and reimagine the power of the sun) signalled the beginning of the Suprematist movement that denied an objective reading of art and nature in favour of the “primacy of pure feeling.”

Shot last summer in the countryside just outside of Montreal and scored with a lulling electronic soundscape, La vie abstraite is Grandmaison’s poetic take on that primary abstractionist maxim. The dual-screen projection is an immersive, perspective-skewing journey into the natural world—time-lapsed clouds drift, billow and race across an azure sky; a tightly framed forest of trees and yellow flowers fade in and out of focus; rain pelts off and pools on the black square, which in another sequence is slowly pulled across a field of tall grass; and, at the halfway point in the 40-minute video, what look like black ink drips slowly onto an unidentifiable cracked and porous white surface resulting in an unmistakably Borduas-like composition. (It turns out that this particular passage was shot in Grandmaison’s studio: black paint dripped onto dried plaster in a kind of material echo of Malevich’s Black Square.) Grandmaison is well-known as an obsessive technical perfectionist, and the micro-macro image sequencing and cuts back and forth throughout the video between isolated images on the paired screens, then back to a synchronous whole, are nothing short of masterful, not to mention hypnotic. In all, this was a work not only to be seen, but experienced.

Rumour has it that at least two major institutions placed holds on La vie abstraite in the exhibition’s first week. And with exhibitions lined up in Paris, Luxembourg and Belgium, Grandmaison is already at work on the “second chapter,” a 70-foot, three-channel projection produced in collaboration with Marie-Claire Blais and provisionally titled La vie abstraite II: Espace du silence that will debut at Galerie René Blouin in Montreal in March 2016. Suffice it to say that Grandmaison’s voyage into the abstract unconscious has only just begun; he describes the new work as “an inner view of a dream about the abstraction of reality.”