When Video is Virtue: Bill Viola Takes the Cathedral 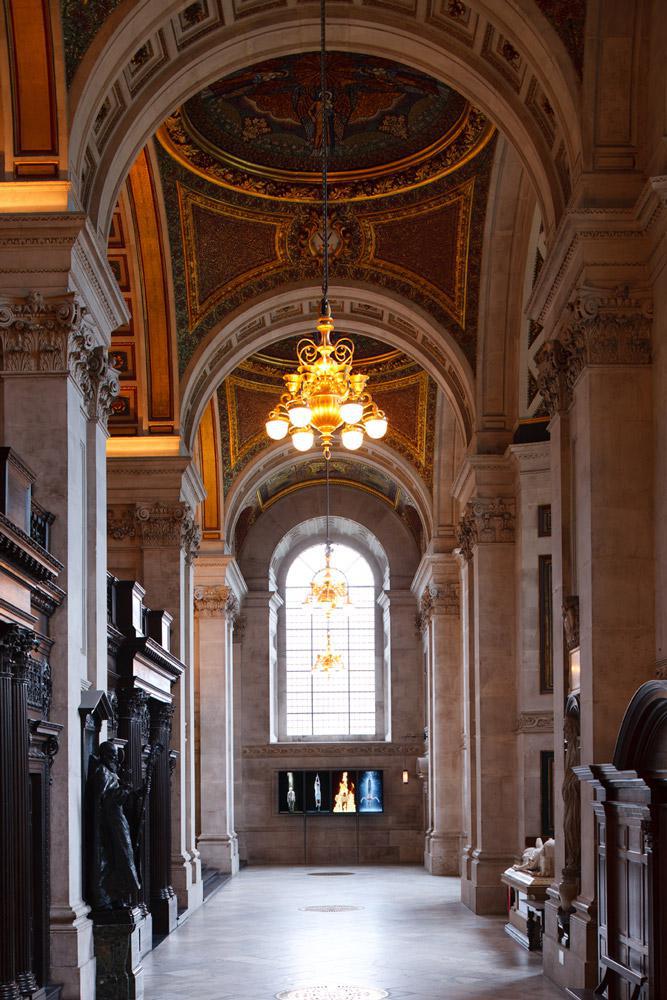 Another view of Bill Viola's Martyrs (2014) installed below a stained-glass window at St. Paul's Cathedral in London.

Bill Viola’s new commission for St. Paul’s Cathedral, Martyrs (Earth, Air, Fire, Water), is an elegant and forceful four-channel video installation. Discreetly housed in a cut-carbon-and-steel frame designed by Norman Foster and situated just below a stained-glass window, the video contrasts with the gilt-and-stone spirituality of Christopher Wren’s masterwork—and as such, it serves as a sort of palate cleanser, inviting fresh contemplation of expected themes.

Martyrs is composed of four consecutive plasma displays, with each depicting someone enduring an elemental punishment: a man is buried in earth; a suspended woman is pummelled by fierce winds; a man is gradually consumed in fire; and a young man hangs upside-down, subjected to a torrent of water from above. The panelled presentation is absolutely at home in a cathedral—this is more Bellini’s San Giobbe Altarpiece than Mel Gibson’s The Passion of the Christ.

Martyrs unites Viola’s characteristic aesthetic restraint with the visual language of Christianity: against the formal austerity of full-length shots on a black background, these biblical torments are received with a mesmerizing perseverance and grace. As in much of Viola’s work, the figures read not so much as individuals, but as exemplifications of humanity inviting our identification.

The temporal component of video is intriguingly subverted through the restriction of each screen to a single scene of torment that begins, and then continues, but yields no satisfying conclusion.

In the leftmost screen, the man who has been buried is gradually freed from his state as the earth removes itself from him in a concentrated funnel and he rises eventually to stand, but this is simply because the initial video sequence is played in reverse—it suggests no meaningful physical release or progress, only an endless cycle.

In the rightmost screen, the young man is first seen at the bottom of the frame curled up in the fetal position; attached to his ankles is a heavy rope that disappears out the top of the frame. Gradually pulled up by the rope so that he is hanging upside-down, the man is subjected to massive cascades of water that begin to pour over him, and eventually he is pulled through the water and out of the frame entirely—a scene that is oddly evocative of a child moving through the birth canal. But none of this feels like resolution, either.

Strangely—as a response to the suspended narrative—one feels inclined to watch these 7-minute sequences several times over, as if to be sure that nothing changes.

Much of the force of Martyrs seems to come from what is not present—there is no audio, nor do the figures manifest anguish in response to the suffering that is their lot. The suspension of narrative gives Martyrs a constancy that allows it to sit more comfortably in the company of unvarying statuary and paintings. (This good fit is fortuitous given that the installation is permanent, and is to be joined by a second Viola piece, Mary, next year.)

Indeed, through the restraint and the lack of narrative resolution in Martyrs emerges an overwhelming message of endurance—and thus, redemption. Viola’s work inspires contemplation, rather than grotesque fascination. This powerful depiction of perseverance also presents a potent, non-denominational theme through which the work may readily be accessed—a spiritual openness that merits no small consideration in light of this work’s location.