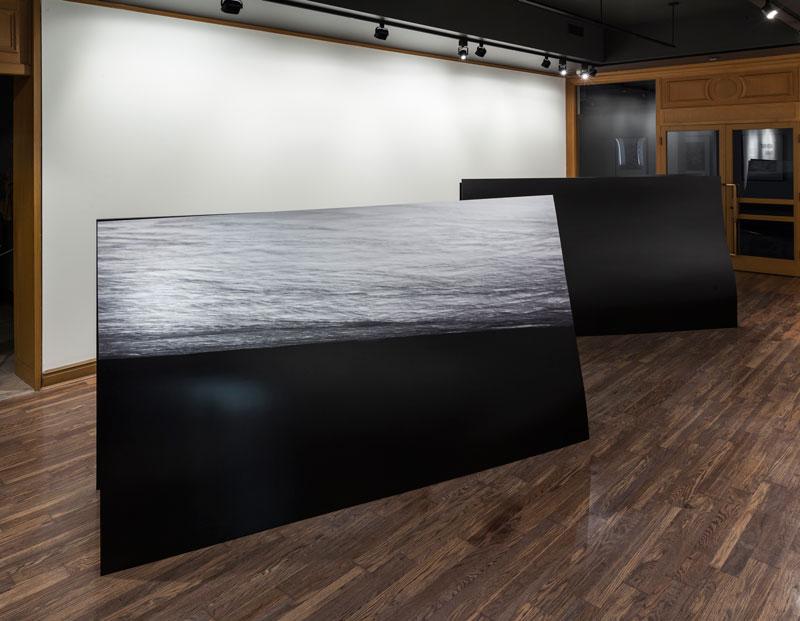 The work of artist Andrew Wright can be a bit confounding—in a good way. Over the past decade and a half, the Ottawa-based artist has conducted photographic experiments that range across media. From turning his garage studio into a camera obscura for a suite of images that capture the passing sky to spotlighting various elements of the landscape (trees, rocks, snow) at night, Wright’s practice pivots on patient perception of what otherwise might be taken for granted.

Yet, throughout Wright’s mid-career survey “Penumbra”—currently on view at the University of Toronto Art Centre as a Contact Photography Festival primary exhibition—it becomes clear that his work is about much more than observational aesthetics.

Wright is first and foremost a photographer, and he has a keen sensibility for the modes and meanings behind image-making. But the longer one spends considering the works assembled for “Penumbra,” the more the show drifts away from a straightforward presentation of photographic objects and into conceptual territory. Wright’s penchant for technical experimentation is one reason for this, as is the variety of display strategies on view. In a sense, many of his works are grounded by performance, and humour plays a key role.

Overall, Wright seems to be just as concerned with upending the conventions of traditional photography—and, in turn, the perspectives of his viewers—as he is in mastering them.

The exhibition’s title offers something of a cue. In astronomical terms, a penumbra refers to both the shadow cast by the earth or moon during an eclipse and the dark outer rim of a sunspot. It can also mean a kind of indeterminate sense of reality; that is, the shadowy edges between what can and cannot be seen or what is and is not understood.

So, rather than focusing exclusively on the visible subject at hand—the natural-world motifs that tie together much of his practice—Wright challenges viewers to redirect attention beyond the static frameworks of his images into the grey zones of action and meaning that lie at their peripheries. Where are the boundaries, he seems to ask, between the image not only as it is taken, but also as it is presented and received? How do conceptual strategies of production and form affect perception?

Take, for instance, a quartet of large-scale photo works titled Nox Borealis (2011). Wright has shown them as wall works in previous exhibitions; here, they lean up against each other in pairs. Each image depicts the fathomless depths of an Arctic horizon at night, a spatially disorienting play on darkness and light punctuated by vacuum-formed bends and curves that push the image beyond the landscape into the confrontational material space of sculpture.

Similarly, in Wright’s Still Water (2009), photos of a weir across the Grand River cascade from black grounds on a set of five free-standing sculptural columns. Spaced evenly apart, the vertical gaps between image/object connect horizontally via the mind’s eye.

Opposite Still Water, two images from Wright’s Standing Wave series (2009) show close-up shots of the swirling tumult of ice-laden water in the Niagara Gorge (home to North America’s largest series of standing waves), making a violent counterpoint not only to the subtle sculptural flow of Still Water but also, in its play on micro/macro perspective, to the kind of panoramic disorientation of Nox Borealis.

A pair of new camera-obscura works commissioned for the exhibition, When Buildings Take Pictures of Themselves #2 and #3 (both 2013), combine process and image to turn the gallery inside out.

As in Nox Borealis (which shows in the same room), there’s a play on dark and light happening here. Wright painstakingly blacked out two rooms of UTAC administrative space, capturing these exposures—one a view of the University College quadrangle, the other the college’s back playing field—through pinhole apertures in windows. (This meticulous process is also a key part of Wright’s performance strategy, it should be noted.)

The resulting tall, vertical silver-gelatin prints depict a reversed positive/negative image of the world immediately outside the gallery. Installed to exactly match those narrowed perspectives, they act as inverted openings on the functional role of institutional space.

That semi-rebellious touch of humour comes through in other works in the show, too.

In his Video Rocketry (2001–7), Wright fixed miniature cameras to the tops of model rockets that he then launched skyward. Each video begins with a fleeting promise of endless skies, and ends ends in a crash-landed close-up of the landscape below.

And in Wright’s photo series Tree Corrections (2013), a grid of bent and wind-worn trees, shot at Georgian Bay locations known to be haunts of the Group of Seven, are “straightened” by rotating their images. This skews horizon lines and, in turn, perspectives on the iconic imagery of modern Canadian art. It’s a subtle gesture, a perceptual sleight of hand that baffles a rational approach. Standing in the gallery, there’s a nagging inclination to adjust and readjust these images with a tilting head, as if implicitly driven to re-correct Wright’s “corrections.”

In a way, Tree Corrections and its effects sum up the exhibition—which includes many more works—and Wright’s work as a whole. Photography, he seems to suggest, is as much about what we don’t see in the image as it is about what we do. And by complicating those points of view, Wright creates an inescapable perceptual conundrum: you have to keep tilting your head in order to see straight.