Artist Rehab Nazzal has released a statement that she was shot by a sniper in the Palestinian city of Bethlehem. 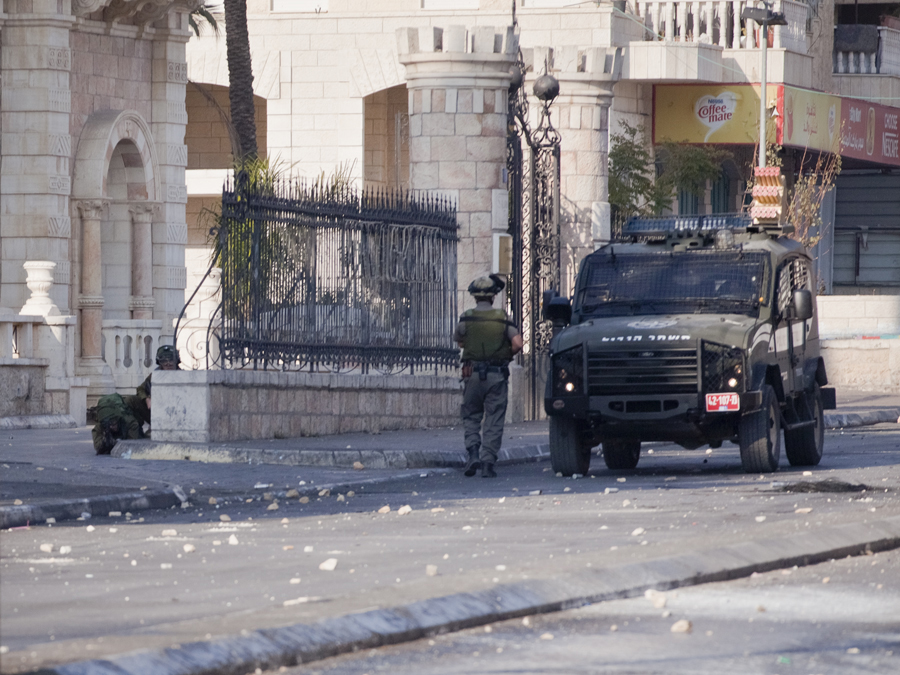 A photograph taken by Rehab Nazzal. “The last image I photographed shows a sniper hiding on the ground near the entrance to one of the city’s hotels,” Nazzal says.

Artist Rehab Nazzal has released a statement that she was shot by a sniper in the Palestinian city of Bethlehem on Friday afternoon while photographing a “skunk” truck, a non-lethal weapon used by the Israeli Defense Forces that sprays chemicals with a strong sewage smell for crowd control.

In the release, which was circulated by artist Jamelie Hassan, Nazzal reports: “While walking, I would take shelter every few metres to avoid the tear gas and the “Skunk” army truck that was spraying sewage chemical liquid on the protesters and the surrounding neighbourhoods. When I stopped by a corner of one of the shops, and while taking some photographs, I was suddenly shot in the leg. I did not realize what had happened. The last image I photographed shows a sniper hiding on the ground near the entrance to one of the city’s hotels.”

The bullet entered and exited Nazzal’s leg without shattering bone, and she is in stable condition.

“What shocked me was the fact that I was alone, with no clashes, no stone throwers, absolutely no one around me, and yet I was intentionally shot by a sniper. This was not an accident,” says Nazzal.

Nazzal’s exhibition “Invisible,” on view at the Karsh-Masson Gallery in Ottawa’s City Hall, was at the centre of debate last year after conservative politicians and the Israeli ambassador Rafael Barak called for its removal. (Diana Nemiroff wrote about the controversy, and the importance of protecting art within the public realm, last year for Canadian Art.)