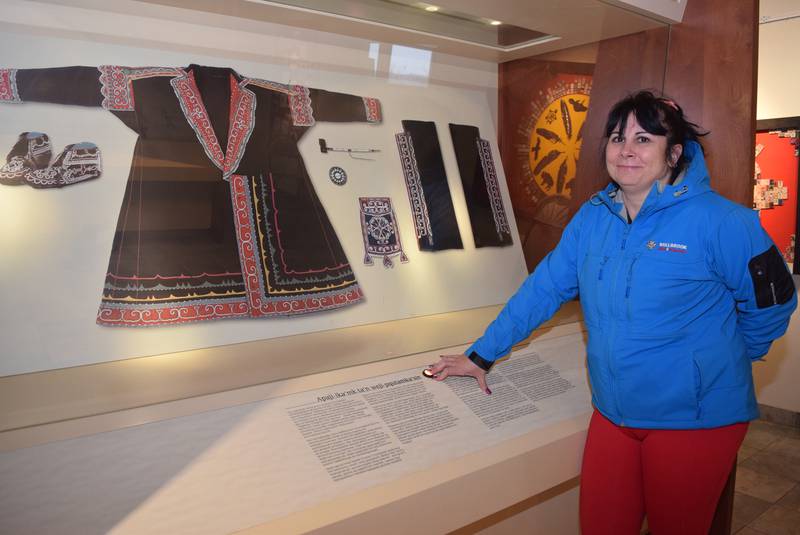 The repatriation of Indigenous cultural items—like the Mi’kmaq robe seen above with repatriation advocate and Millbrook Cultural and Heritage Centre employee Heather Stevens—may be moving forward in Canada with the tabling of a private member’s bill in the House of Commons. Photo: MP Bill Casey Facebook Page.

A Liberal MP is aiming to create a stronger national strategy for repatriating Indigenous cultural items. Bill Casey created Bill C-391 after learning that the Millbrook Cultural Centre, which is in his Nova Scotia riding, only had a copy of historical Mi’kmaq items on view—because the originals rest in a drawer at a Melbourne, Australia, museum. The bill is due to go through a second reading soon. In an interview with CBC’s All in a Day, the head of the Canadian Museums Association, John McAvity, says he supports repatriation, but is also concerned about the lack of concrete detail provided in the bill itself, as well its lack of acknowledgement of existing policy. (CBC News, CBC All in a Day)

Inuit women are reunited with ancestors’ artifacts in Washington—and hope to bring them back north one day. “Former MLA Manitok Thompson, Veronica Connelly, Rosie Oolooyuk and Bernadette Dean visited the Smithsonian Institution as a special set of artifacts that belonged to their relatives was taken out of storage — including hunting and sewing equipment, art and clothing,” the CBC reports. “They even saw plaster molds of Thompson’s great grandparents.” The experience was an emotional one, the former MLA reported, and “Thompson said she hopes one day the artifacts will be brought back to Canada.” (CBC)

Musqueam artist Susan Point has won the $30,000 Audain Prize for Lifetime Achievement in the Visual Arts. The prize grants $30,000 annually to a senior British Columbia artist selected by an independent jury, and Point is being honoured for, as a release puts it, “a key figure in re-establishing the vitality of Salish art, drawing inspiration from the designs of her ancestors and exploring the use of non-traditional materials to forcefully assert the vitality of Salish culture in the contemporary world.” (Canadian Art)

An artist, an art dealer and a critic are among the latest Order of Canada recipients. In a ceremony at Rideau Hall on May 10, Vancouver artist Rodney Graham became an officer of the Order of Canada, while Montreal dealer Rene Blouin became a member of the order, as did Winnipeg critic and art magazine editor Meeka Walsh. Also notable: Vancouver landscape architect Cornelia Hahn Oberlander, who has been working of late on the Canada Pavilion revitalization in Venice, was promoted to a companion of the order (its top ranking) and former Montreal MP Liza Frulla —who made Canada the first signatory to UNESCO’s Convention on the Protection and Promotion of the Diversity of Cultural Expression—was made a member of the order. (press release)

Following wind-storm damage, a much-debated Markham cow sculpture has been moved along. Residents say they were never consulted about Charity: Perpetuation of Perfection, an eight-metre-high homage to an prize-winning Ontario cow. “After a year of turmoil and controversy, the statue was carefully and unceremoniously taken down from its pedestal Wednesday morning — to be returned to the developer who donated it, Helen Roman-Barber,” the Toronto Star reports. Its ultimate end came when a wind storm removed parts of it and made it a public health hazard. The artwork was by Ron Baird, who has created many pieces of public art in Ontario in the past, including Barrie’s Spirit Catcher. (Toronto Star)

And a new public art piece in west Toronto is raising some concerns. “Named Three Points Where Two Lines Meet, the piece by Toronto art duo Christian Giroux and Daniel Young was commissioned in 2014,” the Toronto Star reports. But members of a neighbourhood Facebook group have commented, “saying it’s “an ugly eyesore” and are calling on Councillor Joe Mihevc (Ward 21, St. Paul’s West) for answers.” But: “Now is not the time to pass judgment, but to invite people to look at it and find a way to have it into the community,” Mihevc told the Star. “Art sometimes challenges, and the installation makes a statement, that’s for sure.” (Toronto Star)

Birds have renovated a Brian Jungen artwork outside the Polygon Gallery in North Vancouver. The Globe and Mail reports that the concrete-covered top of Jungen’s Upside Down Flagpole was turned, by a pair of industrious woodpeckers, into a nesting spot this year. As a result of their repeated pecking, there is now a hole in the work. “[Jungen] said it is ironic that a work that is speaking very specifically about land, colonization, the earth as the national symbol, in and of itself becomes colonized by a little friendly denizen,” gallery director Reid Shier told the Globe. “I think there was some beautiful symmetry in that.” (Globe and Mail)

Edward Burtynsky previews his new Anthropocene project—in augmented reality—at Photo London. “Most striking among the works,” the Art Newspaper reports, “is a high resolution mural showing a Carrara marble quarry, a more than six metre-long panorama made by seamlessly stitching together 122 50-megapixel files. The piece literally comes to life using augmented reality (AR)—when you hold an iPad up to the print, the image on the screen pans out to reveal the magnitude of the scene, complete with moving trucks and diggers.” The full project will come into view in two exhibitions opening at the Art Gallery of Ontario and the National Gallery of Canada on September 28. (Art Newspaper)

The Canada Council will be re-entering into conversations with the Canada Revenue Agency about taxation for artists. Since Halifax artist Steve Higgins was surprised with a $14,000 tax bill earlier this year—because Canada Revenue Agency didn’t consider him a professional artist—there has been much discussion about how to correct the situation. In a new release titled “Taxation Questions for Artists,” the Canada Council notes, “The factors that the CRA considers for artists when determining if a business exists were developed many years ago with extensive input from the arts community, Canadian Heritage and the Canada Council. A few of these factors include representation by a dealer or agent; qualifications through education and public recognition; revenue from sales, commissions, royalties, fees and grants etc.” It is now looking to revisit those definitions with the CRA. (Canada Council)

That feeling when you find a Tom Thomson in your basement. Retired Edmonton nurse Glenna Gardiner always remembered her dad telling her that the sketch on their wall was a Tom Thomson. But she didn’t always believe him, and eventually stashed it in the basement. Now, it’s up for $125,000 to $175,000 at the next Heffel auction. (Toronto Star)

Curators have been appointed for the inaugural Toronto Biennial. “The Toronto Biennial of Art has revealed that Candice Hopkins will serve as the senior curator and Tairone Bastien will be the curator of its inaugural edition, taking place in December 2019, and its subsequent iteration, in 2021,” Artforum reports. “In addition, Ilana Shamoon will join the biennial’s permanent staff as the director of programming.” Hopkins is currently curating the next edition SITElines Biennial in Santa Fe as well as co-curating Canada’s 2019 presentation at the Venice Biennale, while Bastien, based in Toronto and Dubai, served as a curator for the fifth, seventh, and ninth editions of Performa. (Artforum, press release)

Some Canadians are on the list for the Gwangju Biennale. The 12th Gwangju Biennale, titled Imagined Borders, will see 162 artists from 42 different countries participate in a series of seven exhibitions exploring the political, cultural, physical and emotional concepts of borders in today’s global community. Among them is New York-based, BC-born artist and Emily Carr College alum Terence Gower, as well as Myanmar-born Canadian artist Sawangwongse Yawnghwe, who is based in Berlin and Amsterdam. (e-flux)

The Latest in Old/New Media

“This Canadian dial-up art is older than the internet, and was long thought to be lost — until now.” So states a new CBC article about Telidon, a system which transmitted art through phones in the early 1980s. Toronto art centre Interaccess has “begun the #telidon Instagram campaign, sharing archival images and exemplary artworks in celebration of a history that’s little-known,” the article states, pointing out that the centre’s history is intertwined with that of Telidon. Some of the old art content is being recovered from “a VHS copy turned up recently at Artexte, a media arts library and research centre in Montreal.” Some researchers are also working on “a browser-based reconstruction.” (CBC)

A look inside Moshe Safdie’s iconic Habitat 67. What happens when utopian brutalism meets messy human reality? Montreal-based architectural photographer James Brittain shows us in “Revisited: Habitat 67,” which “was produced in collaboration with the building’s residents, with whom Brittain spent time during his visits,” Hyperallergic reports. “An exhibition of these large-scale color photographs is currently on view in Toronto as part of CONTACT Photography Festival.” (Hyperallergic)

Calgary artist Ron (Gyo-Zo) Spickett has died at the age of 92. As a post on Galleries West indicates, “Spickett was considered one of the most avant-garde painters of his generation, and had an enormous impact on Calgary’s art community. His fascinating life included starting out as an editorial cartoonist, serving in the Royal Canadian Navy in the Second World War. He went on to teach at the Alberta College of Art and Design and the University of Calgary.” He was born in 1926 and also gave up art for a period of 20 years to study Zen Buddhism. The Glenbow Museum holds more than 350 of his works. (Galleries West)

Remembering Will Alsop, the Brit who changed the face of Canada’s largest art college—and its city. As the Globe and Mail indicates: “The London-based designer, who died on Saturday at the age of 70, was known equally as a bon vivant and as an architect who brought a sense of colour—literally and figuratively—to his profession. He also made an important mark on Toronto with [OCAD University’s] Sharp Centre, which is among the most distinctive buildings in the country.” (Globe and Mail)