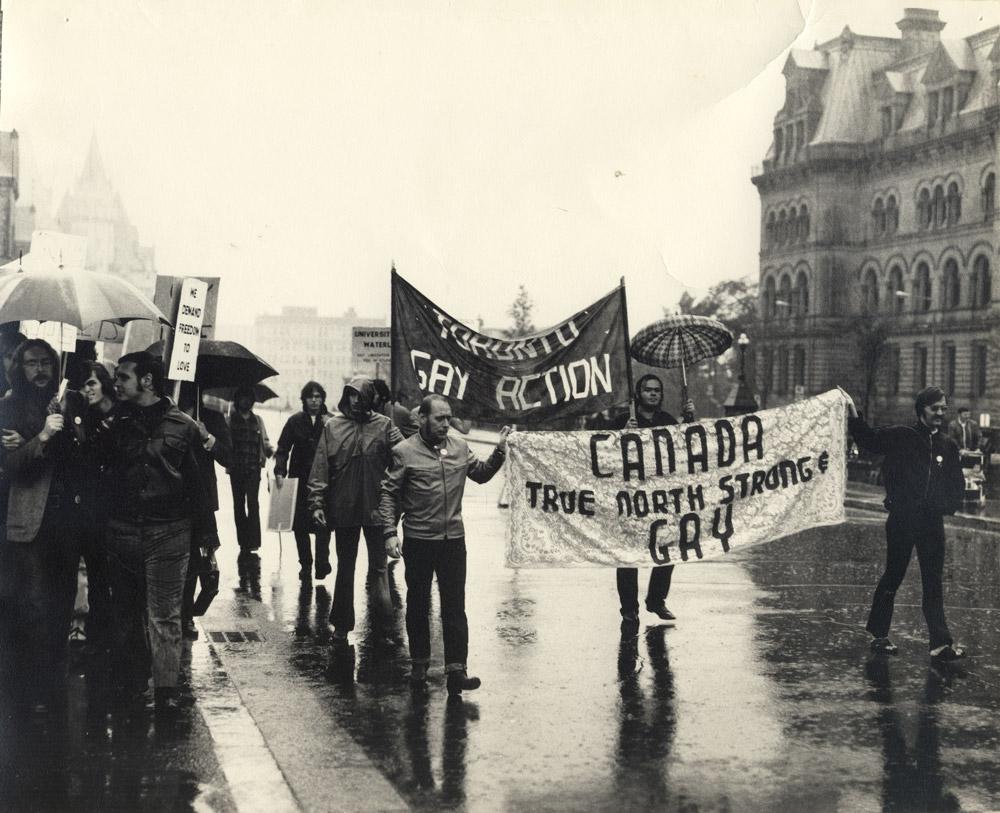 Jearld Moldenhauer's photograph of a 1971 demonstration on Parliament Hill in Ottawa is part of "What it Means to be Seen: Photography and Queer Visibility," which runs June 18 to August 24 at the Ryerson Image Centre. Image courtesy of the Canadian Lesbian and Gay Archives, Toronto.

World Pride officially begins in Toronto on June 20, but that hasn’t stopped the city’s many visual-arts venues from already opening variously themed shows in tribute. Here, a rundown of existing and upcoming best bets.

“What It Means to be Seen: Photography and Queer Visibility” and Zanele Muholi at the Ryerson Image Centre (June 18 to August 24)
Sophie Hackett, associate curator of photography at the Art Gallery of Ontario, presents two exhibitions on the photographic image and queer identity this World Pride. The first exhibition, “What it Means to be Seen” at the Ryerson Image Centre, is more documentary in nature, exploring the concept of “queer visibility” in, among other things, historical news media, addressing both representation and misrepresentation; Ryerson’s famed Black Star Collection and other institutional holdings are Hackett’s sources. Also at the RIC are Zanele Muholi’s portraits, which address the representation of black lesbian and queer identity, focusing largely on post-apartheid South Africa, and Aleesa Cohene and Benny Nemerofsky Ramsay’s collaborative piece The Same Problem Five, which addresses the mutability of the self.

“Fan the Flames: Queer Positions in Photography” (June 18 to September 7) and “Youth Solidarity Exhibition” (June 22 to November 15) at the Art Gallery of Ontario
Sophie Hackett’s second exhibition for World Pride—which also includes curatorial contributions from Vince Aletti and Jon Davies—is “Fan the Flames,” which emphasizes gender play in the work of Mark Morrisroe, Claude Cahun, Chris Curreri, Nan Goldin and others. Also at the AGO, “Youth Solidarity Exhibition” features six young artists selected from online submissions under the theme of “solidarity with Canada’s two-spirited and LGBTTIQQ* communities.” Viewers can vote online for an artwork that best reflects this theme, with $1,000 going to the winning artist, whose work will be transformed into an outdoor mural.

“Bent Lens: Pride On Screen” at TIFF Bell Lightbox (June 12 to August 17)
TIFF and the Inside Out Toronto LGBT Film Festival have co-programmed “Bent Lens: Pride On Screen,” the headlining event of which is “Queer Pagan Punk”—a retrospective of the films of the late British director Derek Jarman, who was spawned by the punk scene but was also a consummate mystic-aesthete. “Skin Flicks: The Films of Bruce La Bruce,” a celebration of Canada’s own “queercore” iconoclast, runs alongside. In the TIFF Bell Lightbox exhibition space, “Queer Outlaw Cinema” showcases work by Jarman and LaBruce as well as by Isaac Julien, Ulrike Ottinger and Scott Treleaven.

“Over the Rainbow: Seduction and Identity,” Museum of Contemporary Canadian Art (June 21 to August 17)
Salah Bachir and Jacob Yerex have long been a Toronto-based cultural power-couple. Bachir is the president of Cineplex Media, Yerex, a painter, and their lauded philanthropic work is complemented by a vast collection hung in their home, which the Toronto Star recently described as blending “kitsch with the classical, sacred with the profane.” David Liss curates this exhibition of work from said collection, which promises to address archetypes of queer culture while also looking beyond them. Fittingly, artists include icons like Herb Ritts, Annie Leibovitz and Andy Warhol, alongside respected Canadian artists Stephen Andrews, Public Studio, Andy Fabo and more.

Nuit Rose (June 21)
Nuit Blanche turns Rose for World Pride with this June 21st event, which unites Toronto’s two “gaybourhoods,” Queen West and Church-Wellesley Village. Organized by Throbbing Rose Collective, the event goes from 7 p.m. to 4 a.m. and boasts installations, exhibitions, and an “art marketplace” as well as plenty of performances, including theatre and music. Participating artists are many, and include Pearl Van Geest, Andrew Harwood (returning to Toronto from Winnipeg to perform as psychic Madame Zsa Zsa) and Caribbean artist Marlon Griffith, artist-in-residence throughout World Pride at the Drake Hotel, who will decorate people’s necks with talcum-powder stencils of luxury brands.

“Camp Fires,” Gardiner Museum (May 29 to September 1)
“Camp Fires” at the Gardiner Museum unites three artists under three identities: gay/queer, francophone and ceramicist. Curator Robin Metcalfe proposes that the trio deploys the concept of camp to generate an aesthetic he calls “the queer baroque.” The informal meaning of “baroque”—that is, excess—is clearly on view in the many intricate pieces, but humour is also a guiding factor. (Witness Foulem’s outrageous golden-dildo fountain.) The etymology and technical meaning of “baroque” is also relevant, for the word literally means “imperfect pearl,” and that combination of beauty and eccentricity is, of course, fundamental to queer aesthetics.

Also worth checking out:

“Generations of Queer” at Onsite [at] OCAD U, which brings together “vital narratives” of Torontonians Robert Flack, John Greyson, Elisha Lim and Kiley May (March 12 to June 28).

The Gladstone Hotel’s annual “That’s So Gay” and “10 x 10” exhibitions, the first emphasizing issues of disability, the rural and other “intersectional experiences of identity,” the second pairing 10 photographers with 10 queer photographic subjects (June 20 to July 27 and June 5 to August 18, respectively).

Curator Leila Pourtavaf’s “Incident Light: Gendered Artifacts and Traces Illuminated in the Archives” at the Blackwood Gallery, about “traces of gender and sexuality” in archives from the Middle East and South Asia (May 25 to July 27).

Zackary Drucker and Rhys Ernst’s film Relationship, recently screened at the Whitney Biennial, which shows the transgendered couple “transitioning in opposite directions,” and screens on TTC subway platforms as part of the Art In Transit series (June 16 to 29).