Elise Rasmussen, A Poetic Truth in a Pathetic Fallacy, 2015 - 2018. Still from HD Video. Courtesy of the artist.

Shadi Harouni, I Dream the Mountain is Still Whole, 2017. Still from HD Video. Courtesy of the artist

Caroline Monnet, History shall speak for itself, 2018. Courtesy of the artist.

Kent Monkman in collaboration with Chris Chapman, United in Love, 2018. Courtesy of the artist.

Caroline Monnet, “History shall speak for itself”
TIFF Bell Lightbox, April 26 to May 31

Montreal-based artist and filmmaker Caroline Monnet has shown at Sundance, Cannes, and the Palais de Tokyo. This Toronto mural work, History shall speak for itself (2018), takes her into the public sphere. In it, strips of a black-and-white image taken from the National Film Board of Canada archives alternate with strips of a colour image of contemporary Indigenous women working in the film industry. (Among them: iconic filmmaker Alanis Obomsawin, Quebecois actress Dominique Pétin, costume designer Swaneige Bertrand, film student Catherine Boivin, the artist Monnet and her sister.) For me as a white settler, the vertical strips conjure early cinema technology like the zoetrope—a form that depends on motion in order to create a unified vision from disparate imagery. —Leah Sandals, news and special sections editor

John Edmonds, “Hoods”
Public Installation at the Metro Convention Hall, April 27 to May 31

In the wake of the death of Trayvon Martin, it is all too clear how the stereotypes associated with hoods—which are deeply racialized and gendered—are meant to denote a possible threat and instill fear, leading to violent, pre-emptive outcomes. For his series Hoods the Brooklyn-based artist John Edmonds photographed people wearing hoods with their backs turned to the camera, leaving almost no defining characteristics visible, save for a few protruding strands of hair. Evoking David Hammons’s 1993 In the Hood (which graces the cover of Claudia Rankine’s book Citizen: An American Lyric), Edmonds’s blown-up photographs in the very public space of Metro Hall will challenge the reactions and ideas of passersby as to who exists behind the hood.–Valérie Frappier, editorial intern

Watch any Arthur Jafa talk or interview on YouTube and you’ll immediately be drawn into the whir of the world as he sees it. Love is the Message, The Message is Death (2016), his 7-minute video of tightly edited images of Black life and death set to Kanye West’s “Ultralight Beam,” has been widely hailed as a masterpiece. As a producer, cinematographer, director, theorist and visual artist Jafa has collaborated with the likes of John Akomfrah, Stanley Kubrick, Spike Lee, Solange, Kara Walker and Fred Moten. The consummate storyteller is outspoken and wields a precise and encyclopedic knowledge of visual cultures and Black creative practice. Jafa, for whom music is a natural starting point from which to understand what an ideal Black cinema might look like, is dedicated to conceptualizing and actualizing a Black aesthetics.—Yaniya Lee, associate editor

What can I say about Shelley Niro incredible legacy that respected Indigenous community members haven’t already said, except that Ryerson Image Centre’s retrospective of Niro’s body of work, celebrating beautiful, powerful and multi-faceted Native womanhood, is historical. Though controversy around “queering” has created friction in Indigenous art communities, I still remember seeing visuals from The Shirt series and thinking, “Oh my god, she looks so butch!” But, as Lacie Burning said to me in conversation, “Mohawk women are just butch.” Ah, yes—a reminder that Native womanhood and femininity are not one and the same, and Native women’s inability to subscribe to white femininities has actually harmed them. Niro was a good 20 years ahead of the gender-fuck rabble-rousers of my generation.—Lindsay Nixon, Indigenous editor-at-large

Erwin Blumenfeld, “From Dada to Vogue”
Corkin Gallery, May 2 to June 30

Look no further than modernist photography to demonstrate the connections between the avant-garde and capitalism—both motivated by modalities of novelty and shock. Some photographers, such as Erwin Blumenfeld, have made this connection so emphatic as to merge style and violence completely. Both André Kertész and Cecil Beaton were fans; later trend-makers such as Guy Bourdin and Jean-Paul Goude couldn’t have done without him. —David Balzer, editor-in-chief

Erin Siddall’s series of photographs makes visible the typically unseen and unseeable effects of nuclear radiation. Translucent, glowing-green dishware is precisely placed in a desert landscape with the care and attention of photographic portraiture. Siddall connects desert test sites with domestic space and reminds us that uranium (still mined and refined in Canada) surfaces in the most unexpected of objects, and that its long and active shelf life leaves us dangerously open to chemical exposure, risk and bodily threat. — Jayne Wilkinson, managing editor

This group exhibition curated by Kendra Ainsworth brings together an exciting and heavy-hitting lineup. Influenced by digital modes and cyberfeminism, this show departs from what has come to be known in fourth-wave feminism as “sad girl theory,” which stipulates that representations of sadness by women-identified people are a way to resist the expectations lain on the female body. The emotions of sadness, which verge on anger and other untamable emotions, manifest in these artists’ works as unpolished, “feminine” reactions to the gritty reality of navigating 21st-century life. –Valérie Frappier, editorial intern

We are all aware of the disturbing correspondences between technological innovation, global warfare and the modern military-industrial complex—or are we? “Photography: First World War, 1914–1918” draws from a collection of close to 500 vintage photo albums sourced from all sides of the conflict to present a rare view of the unprecedented impact of photo technologies on the battlefield strategies and human realities of the Great War. From panoramic aerial surveillance images and flying-ace propaganda cards to personal photos taken in secret by trench soldiers, it’s an echoing portrait of war as a visual narrative that’s both sinister and tragic. — Bryne McLaughlin, senior editor

Fast forward a hundred or so years to the work of American artist and geographer Trevor Paglen. A well-known critical observer of covert military operations and the global security apparatus, Paglen gathers recent and new video and photo works in “Surveillance States” that reveal the dark underside of present-day surveillance technologies. Included in the exhibition is his single-channel video, Circles (2015), focused on British cryptography and counter-intelligence infrastructure (the film ran as a trailer to UK screenings of Laura Poitras’s Citizenfour, for which Paglen served as cinematographer) and a new series of “invisible images”—made by machines for other machines—generated by state-security software algorithms. This is not a conspiracy; it’s reality. — Bryne McLaughlin, senior editor

Shadi Harouni and Elise Rasmussen, “With an instinct for justice”
Doris McCarthy Gallery, May 5 to June 30

When I was little my mother had a TIME/LIFE coffee-table book entitled Photographs that Changed the World. Some images gave me shivers, but I wondered how any of them could have resulted in actual action. When I grew up, my tour through theory told me to question the possibility of change through still and moving images, which objectify, and encourage passive spectatorship. In this show of works by Elise Rasmussen and Shadi Harouni, the topic isn’t change, but resistance and defiance—the visual poetry of enduring presence. —David Balzer, editor-in-chief

“Forward Facing” had me muffling my laughter at visuals of Jade Nasogaluak Carpenter drawing smoke from a cigarette through a sheet covering her body, marking herself as a ghost haunting colonized spaces. At the opening, viewers gave tobacco offerings to an image from Danger’s MASKS series displayed on the outside of the gallery, after listening to Haudenosaunee songs that Danger, Burning, and Kandace Price performed. It was the first time I’d seen a community put tobacco down for a gender-variant and sexually diverse community member. “Forward Facing” is for the viewer who wants to witness the voices of a new generation of Indigenous artists, intent on speaking to diverse experiences of colonialism as played out on their bodies and lands. —Lindsay Nixon, Indigenous editor-at-large

Growing up, I rarely saw representations of my own, two-momed type of family unit. For a long time I had the odd sense that these kinships were strange, illegitimate or shameful. In “Queering Family Photography,” Elspeth Brown and Thy Phu have combed through the Family Camera Network, the Canadian Lesbian and Gay Archives and the University of Winnipeg Two-Spirited Collection to present this collection of queer and trans family photos. IMHO, portrayals of alternative family structures like these, so seldom given a space to be visible, can shift our perception of what a “normal” family should look like.— Yaniya Lee, associate editor

In these new site-responsive works, Laurie Kang eliminates the camera to focus on materials—organic, chemical, mineral—revealed through light-sensitive installations that take the body as their primary concern. Skins, stomachs, skeletons—all sorts of fleshy, biological systems are evoked through the play of light on continually-exposing surfaces. If the certitude of a scientific method, like the processes used to chemically impress image to paper, is to fix unknowns, Kang’s work luxuriates precisely in a space that is ever unfixed, and in a body that is ever-changing. — Jayne Wilkinson, managing editor

This billboard commemorates—in 19th-century French studio-card style—the symbolic marriage of Kent Monkman’s alter ego Miss Chief Eagle Testickle to French fashion designer Jean Paul Gaultier in September 2017. According to the didactic text, that Montreal ceremony was initiated as a way of calling for “mutual respect and cultural understanding” after a Gaultier exhibition there was condemned for cultural headdress appropriation in a wedding piece created by the designer. And this commemoration won’t just be on large-scale public display; it will also be reproduced in card form and inserted into every Contact catalogue as a further play on colonial studio-photography traditions (and who knows, maybe also as a freebie for some of Monkman’s many fans). —Leah Sandals, news and special sections editor 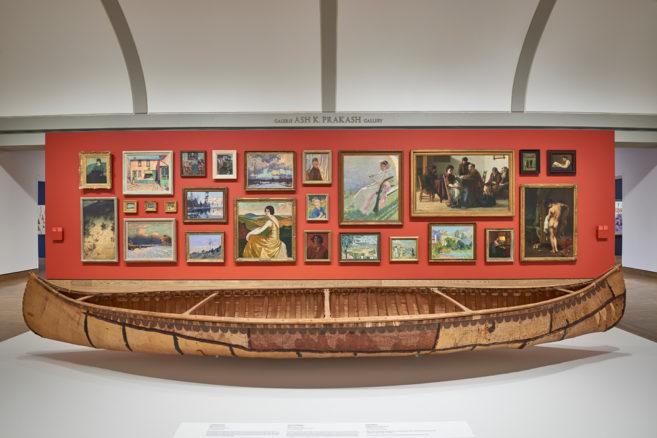 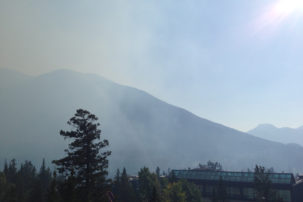 The climate is changing. Nuclear tensions are rising. Forest fires are burning. And Imre Szeman wants to talk about how art and ideas can help. 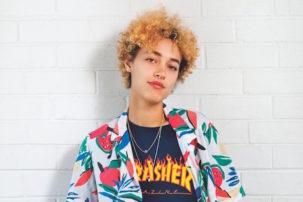 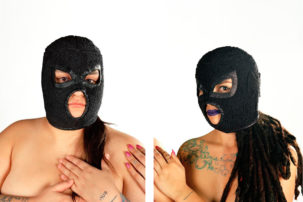 It’s about time for the Indigenous art canon to create a space for gender-variant and sexually diverse voices. They’ve been mostly excluded for decades. 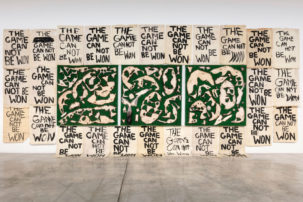