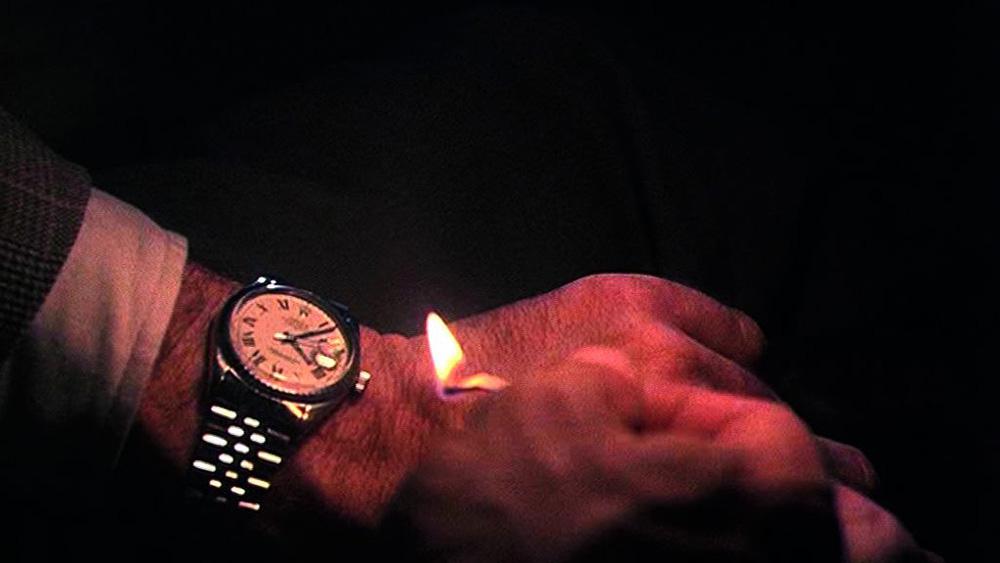 1. “Christian Marclay: The Clock” at the Power Plant, Toronto

The Clock is from 2010, but I saw it in 2012—at Toronto’s Power Plant—and, in my opinion, there’s no overstating the importance of Christian Marclay’s monumental video work, which edits together scenes from movie history featuring or alluding to time to create a functional 24-hour clock and a poignant, panoramic view of how we portray time in film. To talk about The Clock as a critic can be frustrating, or at least ego-deflating, for it means talking about the same things everyone else does: ironically, it makes you lose track of time; weirdly, it makes you consider, simultaneously, your own time, as it is spent in the gallery, and others’, as it is not, as well as that of fictional characters, forever trapped in these eternal moments flashing before your eyes. This is its power, of course. Who’d have thought that in this period of cultural flux and fragmentation, an artist would be able to create such a broad, mass-appeal work which, nonetheless, is so rigorously intellectual, demonstrating pretty much every theory on time’s inexorability and subjectivity ever put forth? (Don’t read Henri Bergson; just see this.) Who’d have thought, furthermore, that in this period of rapid circulation and reproduction of artworks that an artist would be able to successfully create something inspiring such cultish fervor? There were frequently long lines for The Clock this year at the National Gallery and the Power Plant; the same will happen when it comes to the Winnipeg Art Gallery next fall. It is, actually, fascinating that The Clock—the aesthetic of which, with its uncanny, period-spanning montages, is very Internet-y—is not accessible online or on disc, and likely won’t ever be, due to copyright reasons. I, for one, pray this exclusivity continues. It guards The Clock as the religious, and indeed communal, experience it is intended to be.

Disclosure: Janet Werner is a friend, but I pursued this friendship because I liked her painting so much. (I first saw her work in 2005; this year, a painting of hers graced the cover of my first short-fiction collection.) This spring show at Parisian Laundry, entitled “Earthling,” made me like her even more: it’s her best show to date, in the middle of a distinguished, constantly evolving career. Werner is a portraitist of the imaginary—her figures are both actual people and nightmarish and/or comical conglomerations of faces and bodies from magazines and books. But Werner’s real engagement is with painting: its capacities for recording gesture and acknowledging surface; its telling negotiations between, and confusion of, abstraction and figuration; its ability to be both extremely ugly and pretty, risible and serious, to mean nothing and everything, all at once; and its deep connection with acts of looking, for all her characters stare out with as much energy as they prompt viewers to stare back. With “Earthling,” Werner took on the largest formats of her career. Knowing her, I can hardly believe she did it, for she is small and careful, and these paintings are anything but. Indeed, with their sweeping strokes and Gustonian embrace of awkwardness, they seem made by, oh, I don’t know, a Yeti savant. There’s really only one word for this kind of painting: ballsy.

I wouldn’t normally have chosen a film for this list—I’m a big film person, and see many notable ones each year—but Museum Hours, which I saw at the Toronto International Film Festival and which also screened at the Vancouver International Film Festival and the Festival du Nouveau Cinéma in Montreal, is exceptional in this context. It pertains to visual art: how we look at it and how we live with it; how we bring its histories into the present, from vantage points both personal and political. It is also, somewhat, of a Canadian pedigree, namely by virtue of musician and sometime-actor Mary Margaret O’Hara, who gives a remarkable performance as Anne, a Montrealer who travels to Vienna to visit a sick relative and, while there, meets Johann (Bobby Sommer), a security guard at the Kunsthistorisches Museum, where the two find themselves growing closer while gazing at masterpieces of Western art. Museum Hours is by New Yorker Jem Cohen, known primarily for his art films. Here, with art as his very subject, he brilliantly traverses fiction and documentary to create one of the most unique and compelling works of his career. There are many moments to cherish. For those who believe in art’s capacity to transcend its immediate historical and social contexts, and for anyone who has ever cried in front of a painting, or felt their lives changed by exposure to a single image, this film is a profound experience. (Canadians can expect a limited release of Museum Hours in theatres this spring.) A centrepiece scene in the Kunsthistorisches’ Brueghel room, in which a tour guide explains the Dutch master’s paintings to a group of ingenuous tourists while Cohen caresses the paintings’ surfaces with his lens, might be, with its jaw-dropping, goosebump-inducing sensitivity to the power of the visual, my favourite art moment of 2012.