The Carbon Footprint of Art

Are the creative industries the world’s most hypocritical polluters? 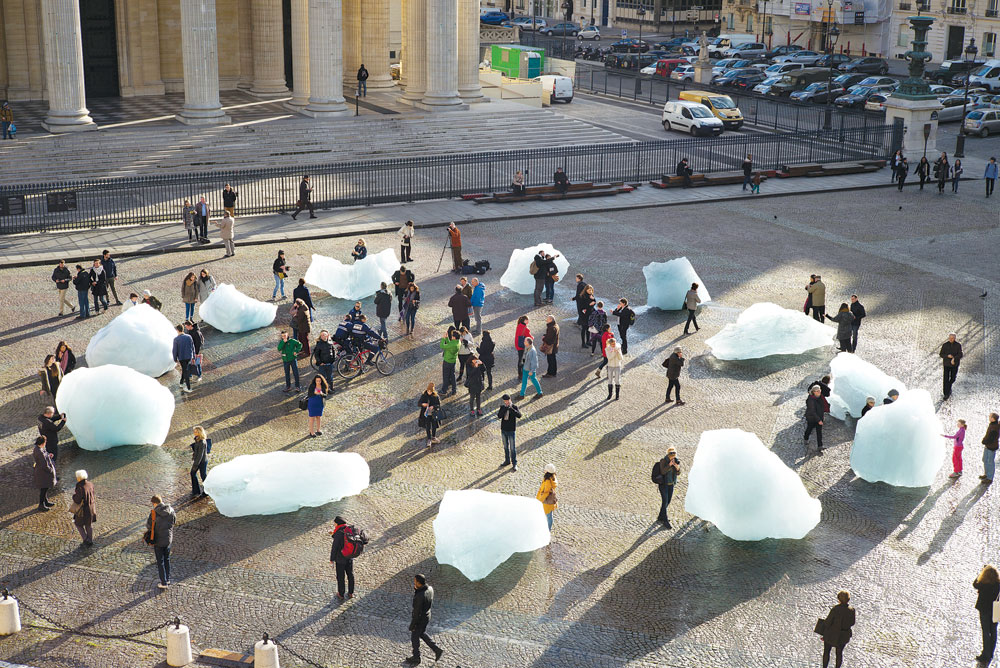 From fields of litter left behind at music festivals to the space heaters used during sweltering summers by employees at climate-controlled museumAs—not to mention all that travel—creative industries are not immune to environmental impact. Still, it’s rarely talked about. We’re used to seeing the arts as a torchbearer for environmental awareness: clarion-call documentaries on global warming, even Hollywood films about environmental dystopias; large-scale photographs depicting industrial exploitation; biennials and conferences themed on the Anthropocene. These and so much more have significant carbon footprints. (A two-year study published by UCLA in 2006 indicated the film and television industry was responsible for an estimated 140,000 tons of emissions a year in Los Angeles alone.) Are the creative industries the world’s most hypocritical polluters?

In late 2015, at the UN Climate Change Conference in Paris, Danish-Icelandic artist Olafur Eliasson and geologist Minik Rosing unveiled Ice Watch. The installation consisted of 80 tons of ice harvested from a fjord in Greenland, and was made possible through a partnership with Bloomberg Philanthropies and Julie’s Bicycle, an award-winning UK-based non-profit dedicated to researching and promoting sustainable practices in the arts. When Julie’s Bicycle released an executive report on Ice Watch that criticized its significant carbon footprint, the art world balked: well-meaning art can indeed be wasteful.

I reached out to Alison Tickell, CEO of Julie’s Bicycle in London, to discuss Ice Watch, climate change, art and ethics, and more.

David Balzer: Could you outline some of the concerns around creative industries that we may not be, but should be, thinking about?

Alison Tickell: The question our organization started with 10 years ago: What is stopping the arts from engaging with climate change and sustainability? One of the first things we realized is that climate change really does require a material response. It’s not enough to talk about it. What about approaching this through the prism of the body, the mind—a more holistic response with a far greater energy around it? Critical mass is important in actually generating a community response. The creative sector is a microcosm of the world. It’s messy, diverse, and its responses are as many as its people or institutions.

DB: What is the overall environmental impact of creative industries versus others, and what are some of the things you’re doing to correct this?

AT: We started out with the confidence of thinking we could do a complete carbon footprint—which was absurdly ambitious. Yet we did look at the UK music industry and found that, even without things like international touring and production, it generated at least half a million tons of carbon in the UK a year. Four years ago, working with us, the UK Arts Council made environmental reporting and policy a requirement for public funding. This was a signal that we need to look at developing environmental literacy but also at being transparent. It has supported the development of a lot of data, which allows us to look at proxies. We looked at two years’ worth of data from 700 organizations in the UK. Those who had to report to the Arts Council saved 47,000 tons of carbon over two years, the equivalent of 9.6 million pounds. What if we didn’t collect financial or audience data, or any critical metrics regarding how we value ourselves, track progress, connect to the wider world? This gives us benchmarks but also unlocks a way of thinking.

DB: During what I’d see as a third wave of popular-culture consciousness around environmentalism, in the early to mid-2000s, we learned that an individual’s efforts to combat climate change can’t match those of large industries, corporations and governments, who must change protocols and laws to make a dent. Are there some sweeping changes that larger cultural institutions, such as museums, are doing to combat climate change?

AT: People are squeamish about telling an artist what to do. I find this tedious. Artists will always do what they want. This is a patronizing and lazy response. Cultural institutions and funders need to create a structure in which artists and creative work can really thrive. You walk into a theatre, for example, and it has renewable power, an inspired staff working on sustainability, whatever. It’s a profoundly different environment than the alternative. It’s one of our jobs to examine what will make institutions successful. We have a short period of time in which we need to think very creatively about the world in which we want to live. In that context the creative sector has a distinct and unique role. We can design, think, imagine, feel, gather communities and shape a way of being that is quite extraordinary.

DB: Environmental sustainability is dependent on money and there’s a lot of under-funding in the arts. At openings I see pre-packaged plastic cheese plates, paper plates, Styrofoam cups…

AT: This conception that being sustainable is more expensive was terribly common when we started a decade ago. What you can’t do is say, “You’re wrong.” It’s not helpful and often not true. For every organization or individual, this is a journey. The Arts Council asks people to use our measurement tools but not to ask for an environmental policy. There are no targets, no “you have to”s. But just by using these tools, people saved money. It’s actually putting more money into the arts.

DB: For Ice Watch, the data that your organization released about the project’s carbon footprint could be seen as critical, yet you were also involved in making the project happen.

AT: We make it clear that everything we do has an impact. This doesn’t invalidate it. We were really keen that Ice Watch have us measure its impact. The work addressed climate change in a way that the actual negotiations were never going to.

DB: It seems that when you find an ethical dimension of creativity that is not 100 per cent above board, people want to question creativity’s very existence—whereas, if you were looking at the provision of electricity, you wouldn’t turn it entirely off because it came from an unsustainable source. I guess I’m talking about concepts of necessity here.

AT: It’s one of the reasons why we’re in this pickle to begin with. We tend to be very binary, but it’s an imperfect world. It’s a big challenge and we have to be very forgiving, generous and trusting. The arts can do so much. We need to get on with it.