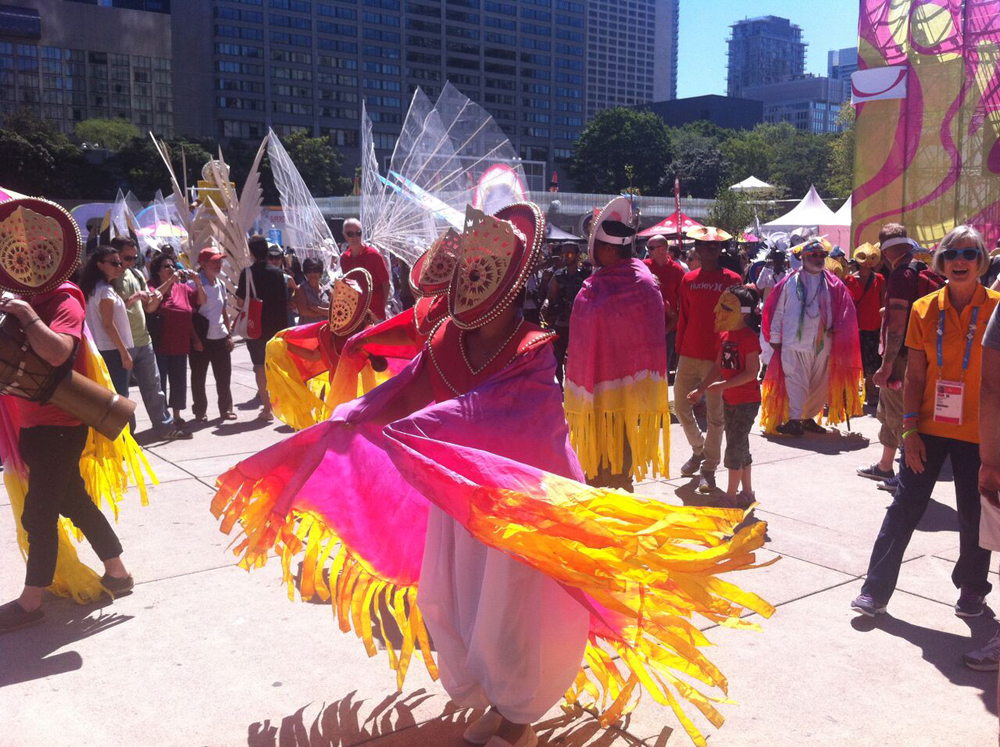 Torontonians packed Nathan Phillips Square last night to see Ottawa’s A Tribe Called Red close the Panamania events that accompanied the Pan Am and Parapan Am Games (which ran July 10 to August 15). As the trio of DJs—which includes Bear Witness, son and frequent subject of artist Jeff Thomas—blasted a fusion of reggaeton and dubstep with traditional First Nations chants and drums, the night provided a dynamic counterpoint to another melding of Caribbean and Indigenous aesthetics performed four days prior.

On Sunday, Trinidadian artist Marlon Griffith led a 300-person procession down University Avenue from Queens Park to the Panamania grounds at Nathan Phillips Square. Led by poet and Saugeen First Nation elder Duke Redbird, who was seated atop a 12-foot tall rolling podium pushed by Griffith and decked out in mas (the colloquial abbreviation of “masquerade”) regalia, the procession was divided into individual units of about 30 people, organized around the Anishinabe Seven Grandfather Teachings: Wisdom, Courage, Respect, Honesty, Truth, Humility and Love. The participants represented a truly diverse cross-section of the GTA, thanks to the participation of numerous arts and advocacy organizations who had hosted “mas camps” during the two years leading up to Sunday’s procession.

As the mas moved along a closed lane of University Avenue, the colour-coded groups were announced by “Sentinal” figures, comprised of disabled participants whose wheelchairs and mobility aids provided the bases for elaborate costuming, armatures and flags. In stark contrast with the bright colours and elaborate decorations, the prevailing tone was contemplative. The mostly silent procession was punctuated by slow, metronomic drumming provided by the Mississaugas of the New Credit First Nations. Occasionally, the procession would halt and the “orators”—spoken-word poets from Jane and Finch, Malvern and Regent Park—addressed the crowd through megaphones as their counterparts signed in tandem. But, for most of the participants, the procession seemed to be more about being seen than being heard—“showing oneself” in Griffith’s words (link)—and the dynamic range was striking. While the scale of the surroundings diminished the 300-strong contingent, their impact had less to do with overpowering the monolithic downtown and more about a diverse group of people being seen on their own terms.