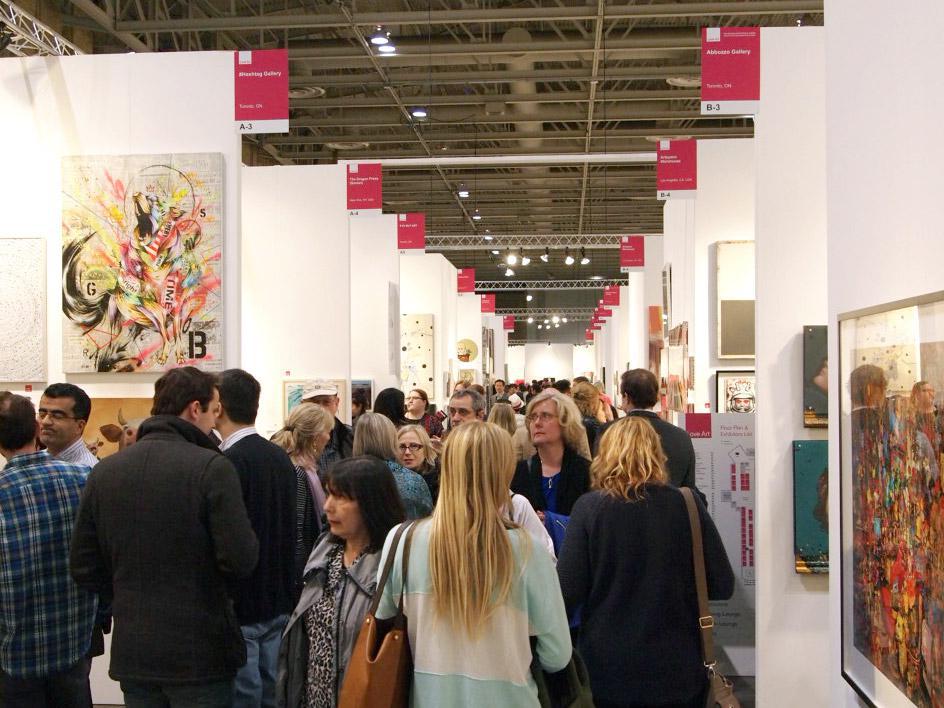 A scene from the Love Art Fair Private View event on May 7. Photo: Britt Gallpen.

This weekend marks the Toronto debut of Love Art, part of the Affordable Art Fair franchise begun in London, UK in 1999 by Will Ramsay and now with international locations in Brussels, Mexico City, Hong Kong and elsewhere. (“Love Art” is an appellation unique to Toronto, because Toronto Art Expo currently owns the rights to “Affordable Art Fair.”) The principle of Love Art is, in the words of director Nicole Milkovich, “to make the process of buying artwork welcoming, fun and engaging.” Works range from $100 to $10,000, with more than half of offerings priced below $5,000.

The fair’s timing in Canada is interesting, coming only weeks after Montreal’s Papier, a works-on-paper fair whose mandate is also accessibility and affordability. But Love Art is different. It boasts a variety of media, impressive given its stress on affordability (you can buy big paintings and sculptures here), and has a conspicuously market-driven, rather than concept-driven, objective. Housed in the Direct Energy Centre in Toronto’s Exhibition grounds, it is not necessarily invested in, say, curation, a recent trend in fairs. Still, it offers the perfunctory tours and talks, many explicitly targeted to the novice collector. With its small selection of 40 booths, cheerful cerise-pink colour scheme and frequent opportunities to sit, sip and talk, it is indeed democratic—although its general admission of $12 per day (Papier, by contrast, is free) seems counterintuitive.

There were ample highlights at Wednesday’s private viewing amid the more explicitly commercial offerings. In a possible nod to the fair’s London provenance, Manifold Editions is one of the first booths visible on entering, specializing in limited-edition prints (and thus cheaper works by) some of British art’s biggest names. Works-on-paper by Damien Hirst, Gary Hume, Anish Kapoor and Marc Quinn (a print version of the latter’s extreme-yoga Kate Moss sculpture was there, and hilarious) were all worth a gander. A few steps over, Beijing’s China Print Art Gallery offered an array of fun, Pop-y, post-Maoist prints.

Writer and editor Arianne DiNardo curated a booth near the fair’s rear of recent fine-arts graduates, and it was tight and smart. Arianna Perricone’s garish, goofy photographs and Sarah J. Munro’s occasionally sparkly black-and-white “Conceal / Reveal” series were particularly arresting. Munro, an OCAD grad, and Perricone, a Ryerson grad, are definitely ones to watch.