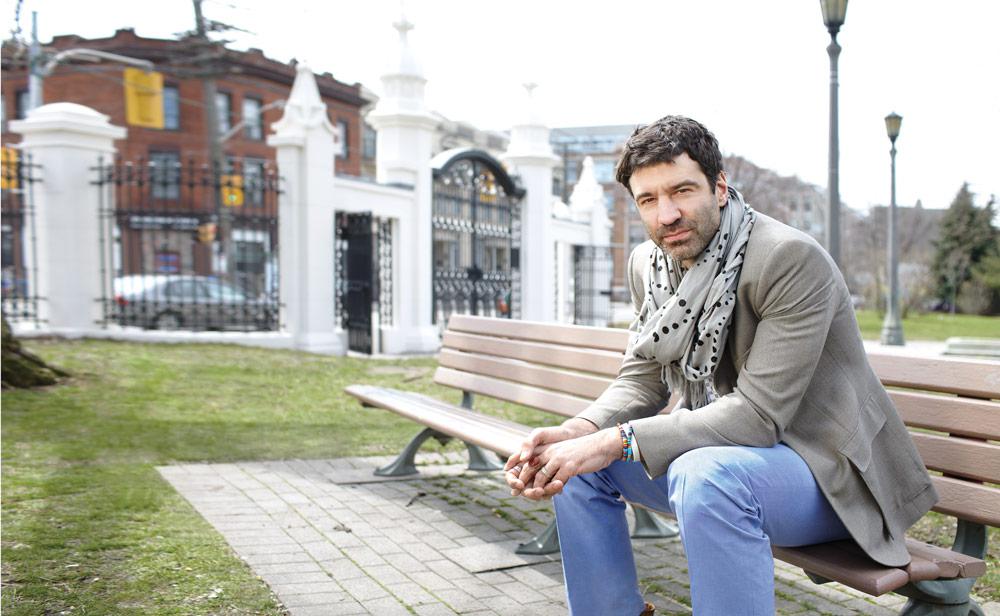 The first thing I notice about Jörn Weisbrodt is his rings. Not every man can pull off jewellery, but Weisbrodt—the tall, dark, handsome, internationally connected culture maker from Germany, appointed last year as artistic director of Toronto’s Luminato Festival—certainly can. There’s the band on his left hand from his husband, singer-songwriter Rufus Wainwright. There’s a gorgeous mauve cameo ring, a gift from fashion designers Viktor & Rolf to Wainwright after he sang at one of their shows. (The ring was too big for Wainwright, so Weisbrodt gladly appropriated.) And the pièce de résistance: a stag-tooth ring, traditional Austrian hunting gear, which Weisbrodt bought on eBay to replace an earlier one that was tragically defanged in the back of a cab.

Weisbrodt is into art, furniture and tchotchkes; he owns a bronze Buddha from Susan Sontag and a rare Carlo Mollino stool. He insists he is not a collector (“I just love objects”), but his thirst to acquire seems not unrelated to his profession. At the Berlin State Opera house, he commissioned unorthodox, site-specific works by Jonathan Meese and John Bock. He is well known for his longstanding relationship with American director and artist Robert Wilson, with whom he began his career as, in his words, a “personal assistant/slave/travel companion/walking office/suitcase carrier,” later becoming executive director of Wilson’s company, and director of his Watermill Center in Long Island, New York.

The Wilson connection brought a remount of Einstein on the Beach to Luminato last year, and continues this year with The Life and Death of Marina Abramovic’, a biographical opera about the performance-art superstar, directed by Wilson and featuring Abramovic’, Antony Hegarty and Willem Dafoe. In many senses, the opera was made possible by Weisbrodt, who is good friends with both Wilson and Abramovic’. Abramovic’ is also bringing her participatory “Institute” for performance art to Toronto’s Trinity Bellwoods Park for the duration of the festival. “I definitely see myself more as a facilitator,” Weisbrodt reflects, “working with artists and providing them with a space to create new pieces.”

A wanton interdisciplinarian, Weisbrodt singles out visual art as something he’s keen on, raving about his visit to Carolyn Christov-Bakargiev’s free-form Documenta 13—“for three days, I was so extremely happy”—and then segueing into another Luminato offering, STOCKPILE, a collaboration with MASS MoCA and “Oh, Canada” curator Denise Markonish that brings together nine artists from across the country for a giant-size carnival-claw installation in Brookfield Place.

But Weisbrodt is not into counting Canadians. He mentions Christov-Bakargiev’s deliberate omission of birthplace when identifying Documenta artists in the event’s title cards. (“There were probably more Canadians there than Germans,” he quips.) He sees a festival “as a place where you not only create a temporary home for artists, but also allow artists to meet.” “Artists have no passports” is a philosophy he holds dear.

Canada is now more than a temporary home for Weisbrodt, and he is noticeably happy with his latest acquisition. “I’ve been extremely welcomed,” he says. “There’s an awareness in Canada that it’s got to somehow explode; the border with the US is like this huge wall, and, in a way, it’s cracking up. People haven’t really made up their minds if they want to rise to the occasion or if they prefer to stay at home—but I definitely don’t want to stay at home.”

This is an article from the Summer 2013 issue of Canadian Art. To read more from this issue, please visit its table of contents.