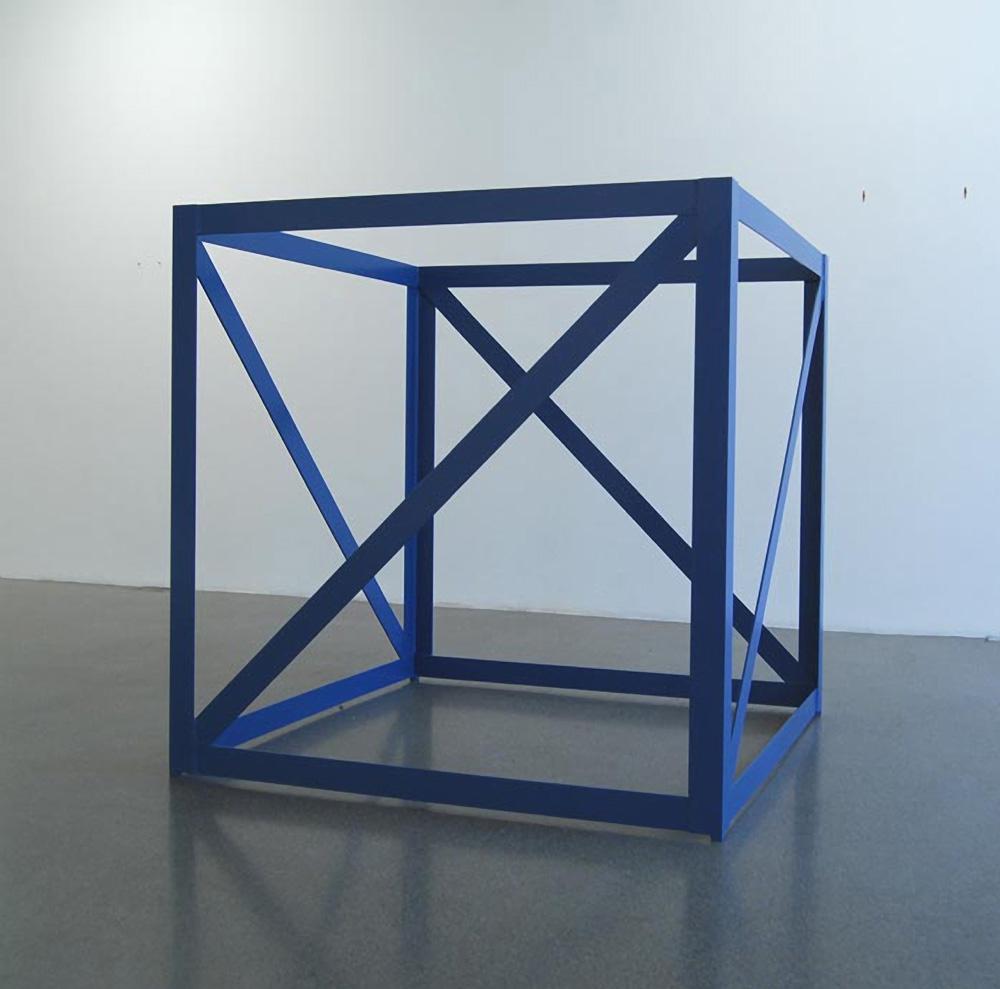 Curator Jens Hoffmann is known for for his playful, thoughtful engagement with the history of exhibition-making. In 1999, he collaborated with artist Maurizio Cattelan to stage a fake biennial in the Caribbean—“The Sixth International Caribbean Biennial,” even though there had been no previous five—for which the artists most prevalent in that decade’s proliferating international biennials were essentially invited to go on vacation to St. Kitts. In 2012, at the CCA Wattis Institute in San Francisco, Hoffmann curated “When Attitudes Become Form Become Attitudes,” a response exhibition to late curator Harald Szeemann’s legendary 1969 showcase of the avant-garde at Kunsthalle Bern, “When Attitudes Become Form.”

For his first official exhibition as deputy director, exhibitions and programs, at New York’s Jewish Museum, Hoffmann has decided to mount a response exhibition to another canonized curatorial effort, probably the most discussed in the history of the Jewish Museum: Kynaston McShine’s 1966 show of new sculpture from America and Britain, “Primary Structures,” which effectively introduced Minimalist artists like Sol LeWitt, Donald Judd and Robert Morris to a broader public.

Foremost, Hoffman’s exhibition, entitled “Other Primary Structures,” is an airing of sculptors who were working outside America and Britain during that period. It is divided into two parts: the first, “Others 1,” which runs from March 14, looks at work made from 1960 to 1967; the second, “Others 2,” which runs from May 25, looks at artists working between 1967 and 1970. Artists from Asia, Latin America, the Middle East, Africa and Eastern Europe are all featured in Hoffmann’s large-scale augmentation of McShine’s original project.

Canadian Art chatted with Hoffmann over the phone about his motivations behind “Other Primary Structures,” and about the fraught, fascinating act of revisiting a cultural and aesthetic milestone.

DB: Can you elaborate on your use of “other” in this exhibition’s title?

JH: Of course there are two ways of looking at “other.” One is the straightforward interpretation, the idea of “other” as in “more” or “additional.” And then, obviously, [I was] very much thinking about “other” in terms of how it has been used within the discourse of postcolonialism and the third world and non-Western art in general—even going as far back as [the seminal, controversial 1989 postcolonial group exhibition at Paris’s Centre Pompidou] “Magiciens de la terre,” and that whole conversation that came out of that within the visual arts and curating.

DB: So is it accurate to say that a show such as the original “Primary Structures” “others” or has “othered” the art that it left out?

JH: I actually don’t really have a problem with the term “other.” I don’t even really understand the argument against it. One of the things that I’ve been very interested in and something that was really important for the entire exhibition was Rasheed Araeen, the Pakistani artist who in 1989 curated an exhibition at the Hayward Gallery in London called “The Other Story,” which was of course the same year as “Magiciens de la terre.” And they were kind of basically antithetical to each other. “Magiciens” was instrumental in drawing all these global cultures into the orbit of a Western institution and “The Other Story” was looking at what has been going on within the space of the colonizer, and it’s different from that. The subtitle of “Primary Structures” is “Younger British and American Sculptors.”

JH: The absence of artists from the places that we are looking at, whether that is South America, Africa, the Middle East, South Asia, is in the institution, but in 2013 and 2014, the absence of those artists is in a larger understanding of art history. We need to continue to address this. It’s particularly important to the Jewish Museum given that the Jewish Museum has not necessarily really thought about what it means to be a museum in the 21st century within a globalized context—a globalized political, economical and cultural context.

If we go back to the most celebrated show of the entire history of this institution and bring in that discourse from a completely different angle, there is a certain form of subversion, I guess, or critical thinking about its own history. I don’t mean to say that Kynaston McShine, when he made that original exhibition, didn’t look elsewhere. I just think that in 1966, when the show took place, it was just not happening. So I don’t want to say the show was racist or discriminatory or anything like that. It’s just that, if this show would have happened in the 1960s and the era would have been as globalized as it is today then I think the artists that I’ve selected for my show would have been in this show of Kynaston McShine’s.

DB: So as a curator is it important not to drift towards thinking of this exhibition as salutary, palliative or rectifying, an act of correcting history?

JH: This is not at all what I’m interested in. My notion of history is a much more confused one. I see history as full of holes and being this big fragmented soup of different forms of information. We all know that probably 80 per cent of what we consider to be history is speculation. Making history—art history or any other form of history—is filling voids of not knowing. We have to create a narrative, a story. I’m not trying to revise anything. For me this is much more about looking at an exclusion that I feel is still happening today, of artists from certain regions—especially in a context like New York that is extremely market-oriented and almost self-sufficient. It’s very hard for an artist from a non-Western country to break through here.

DB: It seems a curious choice for an exhibition to revive in this way. Outside of the exhibition’s association with the Jewish Museum’s history, it is an exhibition of the Minimalist moment… Not of art related to cultural stories or identities. Are there really detectable elements of this sculptural aesthetic or genre that can be tied to place or ethnicity? When we look at this show will we see this? Or is late-modern sculpture a democratizing, or maybe even a homogenizing, thing?

JH: I suppose that in a way all of this comes down to the same source, the same idea, whether that is in North America or Latin America or Eastern Europe. Obviously we’re still talking about a very Modernist aesthetic that influenced development and formal experiments coming out of the early avant-garde movements of the 20th century. All of the classics, Albers, Mondrian, Malevich, are the bases for any of the expressions that come out of that period.

I’ve been doing a lot of work in Latin America recently and often come across abstract geometric artworks. You think about Lygia Clark, for example. Coming from a Western context and having spent a lot of time in Europe and North America, you think, “Oh yes, this was probably within the same sphere as Minimalism in the West.” And of course some of the artists would say, “Well, you know, Minimalism in itself as an idea was something that was born in the West, and then, later on, people started to describe our work as Minimalist.” So what you called the “Minimalist moment” is probably more accurate than saying this is a show about “global Minimalism.”

There are all sorts of reasons why I’m going back to this exhibition. I think it’s something that needs to be investigated, in terms of how we position ourselves for the future. What is the identity we want to create for ourselves now that we have new leadership in this museum and are moving to a different approach that is more contemporary, more engaged with the here and now? It’s kind of like a conceptual thing in itself. I, as a curator, will go and make a show in response to what has been the most celebrated show in the history of this museum.

Someone said to me, “Oh, I could have predicted that this is what you’d have done for your first show.” But they won’t know how it will unfold or what it will look like because there are a lot of elements in the show that will be very surprising to people. I think it’s important for museums to be able to do this. Maybe this show won’t bring in thousands of visitors but if we can’t allow ourselves to do these more experimental or rebellious exhibitions then I can just stop working. It wouldn’t be worth it anymore.

DB: So, then, what was the original response to “Primary Structures”? We know it’s art-historically important, but was it well-attended?

JH: It was a completely different institution back then. It was more of a kunsthalle situation without a permanent display of the collection. Things were much more fluid and open. There wasn’t that media attention we have now with a million blogs and newspapers, etc., looking for information. Interestingly enough, and I’ve really benefitted from this, the Jewish Museum has one of the most amazing archives I’ve ever seen of their own history. I literally had everything there in front of me, from old floor plans, to old invitations, to old photographs—everything was there. I didn’t have to unearth a lot of information. It helped enormously.