Emily Vey Duke & Cooper Battersby: A Place for Everything 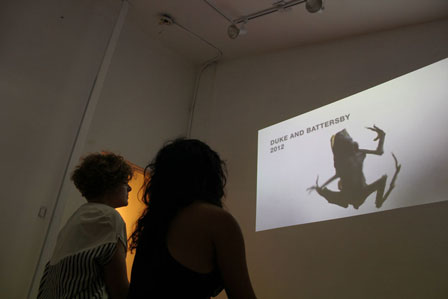 Emily Vey Duke and Cooper Battersby are currently without gallery representation in Toronto, which makes their new show in the city, at the recently opened gallerywest space on Queen West, a unique viewing opportunity. (The duo last showed in Toronto with their former gallery, Jessica Bradley Art + Projects, in 2010, the same year they were shortlisted for the Sobey Art Award.)

The name of the show is “Pain Shall Be No More,” and it is a mini-retrospective of sorts, following, according to Duke, a “difficult last few years” that included a “midlife crisis”—the artists recently turned 40—in which they questioned “whether or not we wanted to keep making art anymore.” Works-on-paper and photographs dating back to the mid-1990s in “Pain Shall Be No More” signal a mindful return to their earliest efforts, recreating pieces they did for zines when Duke was an undergraduate student at the Nova Scotia College of Art and Design.

A new video work, Here Is Everything, runs in the gallery’s back space and similarly explores the meaning of aesthetics within the life cycle. It is, Duke says, “a trailer… not a finished piece,” and those who saw the version of the artists’ Lesser Apes at Jessica Bradley Art + Projects in 2010 will recognize parts—ones that were cut from later versions of the video, which Duke considers “a kind of failure for us” because it “was quite literally fictional. Other stuff that was not explicitly autobiographical had at least been true.”“Pain Shall Be No More” also contains two sculptures from this year, part of a series entitled Cabinet of Curios, the standout of which is a memorial to two recently deceased housecats. (Duke and Battersby are vehement cat lovers, to which their work has, for decades, attested.) Turbine and Ellio, skinned by the artists with the guidance of fellow sculptor and filmmaker Dani Leventhal, lie on top of a plinth made by Battersby from a felled black walnut tree in the couple’s yard. The odd, poignant conglomeration is topped with a china bowl—full of mouse, possum and chipmunk teeth, as well as a beetle carapace—that is closed by a glass lens.

Here Is Everything begins with a quote from a young Dostoyevsky on his first novel, Poor Folk: “What matters is that my novel should cover everything. If it does not work, I will hang myself.” The statement, brimming with earnestness and ambition, seems understood by Duke and Battersby as a challenge: both in its absurdity and in in its ingenuousness, the combination of which lies, perennially, at the heart of their practice.