DIS Placed: Q&A with the Curators of the Berlin Biennale

"People constantly repeat the cliche that Berlin is over, but it's only just begun." Canadian writer Tess Edmonson talks with Berlin Biennale curators DIS. 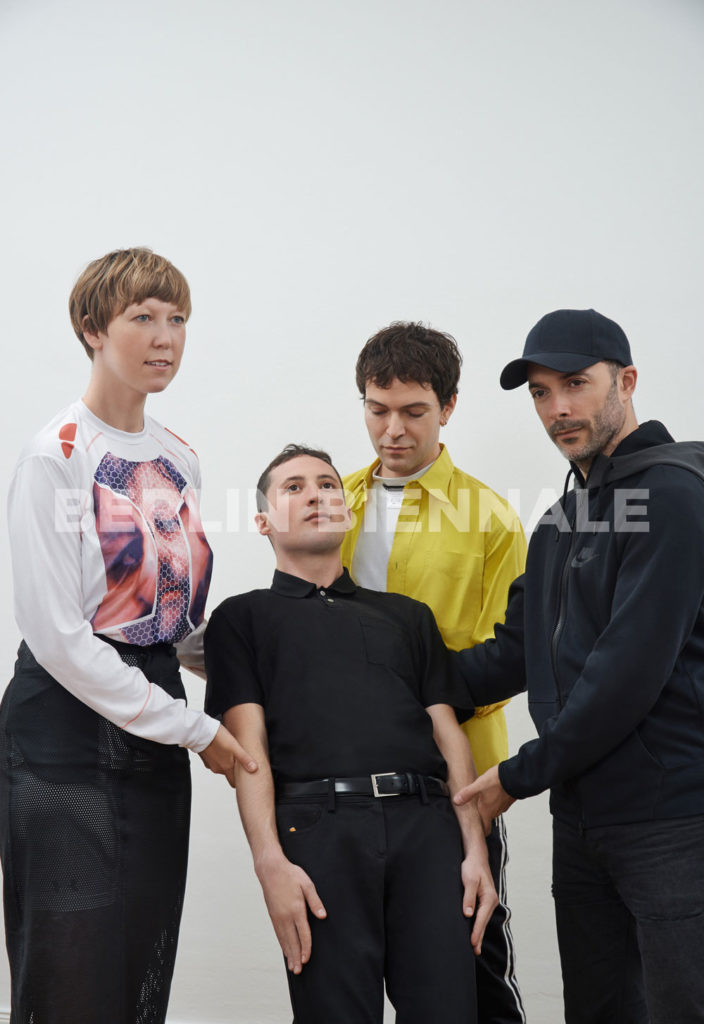 A note from the editors: In this sneak preview of our Summer 2016 issue on collaboration, we offer an abridged version of Berlin-based Canadian writer Tess Edmonson’s interview with Berlin Biennale curators DIS. The Berlin Biennale opens to the public June 3, and includes work by Montreal-based artist Jon Rafman. To read Edmonson’s complete interview with DIS, pick up a copy of Canadian Art‘s Summer 2016 issue, on newsstands June 15.

The appointment of New York artist collective DIS as curators of this year’s ninth Berlin Biennale was, for many, unexpected. The group, consisting of Lauren Boyle, Solomon Chase, Marco Roso and David Toro, is chiefly known for the publication of DIS Magazine, a self-described “post-Internet lifestyle” magazine founded in 2010.

While the scope of their activities extends beyond online publishing, it’s a far cry from the traditional trajectory of those who tend to get elected to curate major biennial exhibitions.

Rather, it’s DIS’s deep engagement with a network of practitioners—artists, stylists, writers, DJs—as well as their aptitude in fostering a new kind of discourse online that makes them attractive candidates for the role.

When the very first edition of the Berlin Biennale—curated by Klaus Biesenbach, Hans Ulrich Obrist and Nancy Spector—was mounted in 1998, the city’s promise as a future cultural metropolis was still uncertain.

Eighteen years later, the former East Berlin neighbourhood in which the biennial’s home institution, Kunst-Werke Institute for Contemporary Art, is located has been fully gentrified many times over, which is likely not a coincidence. Significantly, the ninth Berlin Biennale takes as its point of departure Pariser Platz—arguably Berlin’s most tourist-dense public space, located at the base of the Brandenburg Gate.

On the eve of the announcement of the biennial’s venues, I spoke with the DIS collective to discuss how they envisioned this geographic shift: how it reflects their experience of the city, and what it means for the exhibition.

Tess Edmonson: I’d like to ask you about the venues you’ve chosen for this iteration of the event. The Berlin Biennale is so strongly associated with this early-2000s moment of art production in Berlin, when the economic and cultural climate represented a great deal of possibility. In part, it’s still strongly grounded in the mentality of that era, as well as in the exhibition’s traditional physical location of Kunst-Werke Institute for Contemporary Art on Auguststrasse, even as the city’s changed. Naming Pariser Platz as one of the exhibition’s focal sites feels like a radical move.

DIS: When we got to Berlin, it became obvious how funny it would be for us, as New Yorkers, to come and tell Berliners about their city. It just didn’t seem like our place to do that. We were immediately attracted to Pariser Platz, Potsdamer Platz and the kind of spaces that are so full of people and capital and power, and we related to that probably because it’s more global and not nostalgic at all.

TE: The move away from Auguststrasse definitely reads like a rejection of that kind of nostalgia for cheap rent, artistic freedom, unused urban space and similar myths that defined the Berlin Biennale’s early years but perhaps are no longer true—or at least not to the extent that they once were.

DIS: I mean, we’re not even outraged by it. It’s just, like, this is where we have to begin.

TE: It also reminded me of the way that people constantly repeat the cliché that Berlin is over.

DIS: It’s actually just begun! And we actually find it very interesting. We looked for venues that have a certain essence of paradox—like a certain kind of paradox embodied in them—because that’s an underlying theme of the Berlin Biennale.

TE: I think that a lot of people were surprised at your appointment as curators. Like you mentioned, you’re this New York group coming to Berlin, and you’re expected to be able to tell people what the city means. Your profile is also so different from the kind of institutional curators that generally get put into these roles. I wonder if you think the position that you’re coming from, having dealt with a lot of forms of production that are not always rooted in the art world, maybe gives you an advantage over a traditional curator?

DIS: I guess that’s the thing: we’re not only tourists in the sense of being in a foreign city, but we’re also tourists in the institution, in this biennial world that we have not previously been a part of, or associated with. So there’s a certain freedom and naiveté that comes with it that I think we’ve fully tried to embrace, after plenty of time feeling distracted by what we might be expected to do. But we decided to just do what we know and what we do best.

TE: In what ways does curating the ninth Berlin Biennale depart from the work you’ve done with DIS Magazine?

DIS: One big decision that we made was to have an emphasis on physical works. The website is definitely a venue in itself, and we’ve focused on it, but I think a lot of people were expecting us to go fully digital or something. For us, just doing a show, even when it’s not in the most traditional exhibition spaces, is new and exciting. We’ve always been into creating these IRL experiences around events in the past, and I think that’s where we’re coming at the Berlin Biennale from, too—thinking of it like a three-month-long event that happens in an exhibition space, trying to create an energy and a vibe.

TE: The visual identity of this edition of the Berlin Biennale is distinct from the previous ones—the website is incredibly slick, and doesn’t in any way reproduce the standard format of an institutional website. What do you think the role of visual communication is in the biennial?

DIS: It’s more than just visual communication: it’s the whole Berlin Biennale brand, the idea of something that lasts longer than the exhibition. We knew that we wanted the brand to be emphasized more than it is with other biennials, so we invited Babak Radboy (of art collective Shanzhai Biennial) to work with us on the communications strategy in general.

The website is another platform altogether. We’ve created a lot of videos for it, and we’re collaborating with a whole host of artists. We don’t want to represent the biennial through installation shots—that can’t possibly, possibly represent what’s going on in the world right now. We’re very medium-focused. We know we need publicity images, so we’re going to create them. We have artists, big-name artists, who are just going to work on the exterior of the ninth Berlin Biennale—they will not be in the exhibition, but they will somehow become the face of the show. They’ll be on the cover of the catalogue, for instance, but they’re not in the show. At every juncture, we’re trying to manipulate the situation, and give the Berlin Biennale another kind of voice.

Tess Edmonson is a writer and editor based in Berlin, is assistant editor at art-agenda, and is a former editorial resident at Canadian Art. To read the rest of her interview with DIS, pick up a copy of Canadian Art’s Summer 2016 issue on collaboration—currently on its way to subscribers, and available on newsstands June 15.