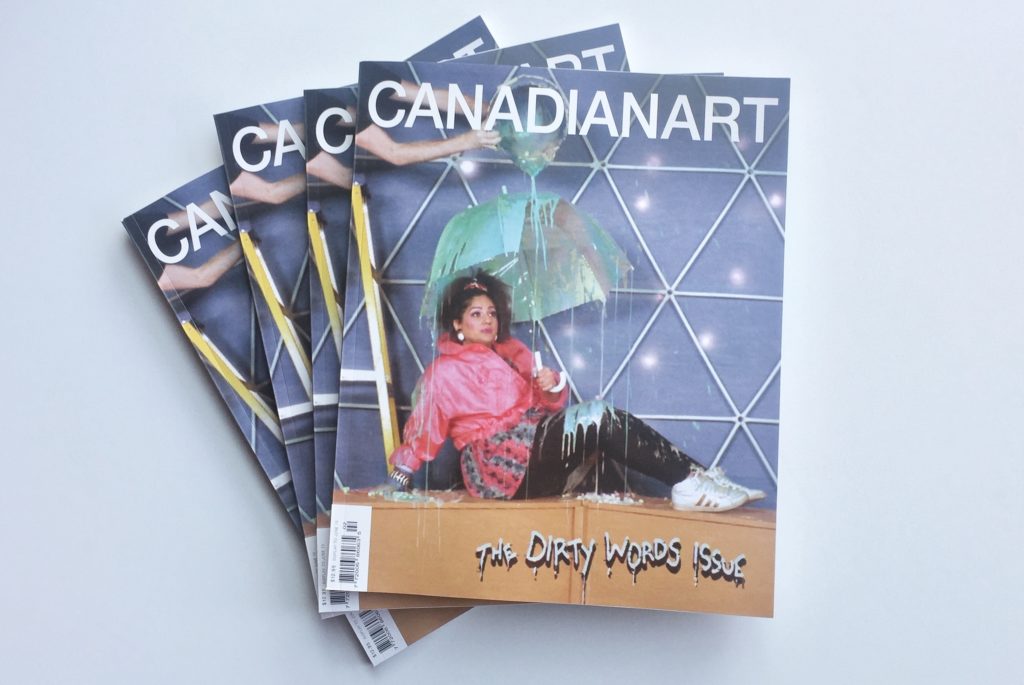 Divya Mehra is the cover artist for the Spring 2018 issue of Canadian Art.

What’s a dirty word? Our cover, by Winnipeg-based artist Divya Mehra, begins the conversation by referencing a popular, low-budget, Ottawa-shot kids’ television show from the 1980s called You Can’t Do That on Television. (The show continued its life and generational influence into the 1990s, syndicated on Nickelodeon in the US and YTV in Canada; Alanis Morissette was one of its cast members.) Every episode featured corny, Laugh-In–style sketches and banter; most remember it for the green slime that fell from above on its young actors. Less remembered is why those actors were slimed: whenever they said, “I don’t know.”

This was probably meant as a sadistic, absurdist punishment for pubescent apathy. (Whatever the reason, it was dependably funny, much more so than the show’s scripted jokes.) But in 2018, notably in the context of performative politics on social media, it looks like a cute metaphor for the censorship of doubt, curiosity and skepticism. The slime is the kids’-TV version of a “fake news” retort. The critic is made to feel juvenile for speaking up, but is ironically silenced by an actually juvenile, and notably public and atavistic, form of humiliation. In Mehra’s re-creation, she rebels, shielding herself from the slime—dumped on her by white, male arms—with an umbrella. There is a stoic, ironic expression on her face.

It would be too tidy to conclude that contemporary art allows us to express the dirty words that society otherwise forbids. Indeed, the articles inside this issue say quite the opposite. Many question such an assumption as self-congratulatory. As Jaclyn Bruneau notes in her essay “Labour”—every piece in this issue is titled after the dirty word it explores—the art world frequently “puffs out its chest about progressive politics, materialist and institutional critique, and social justice,” concepts that can be disturbingly absent “in internal operations and work culture.” Our “Dirty Words” issue is about the many, complicated concerns that inform the production of art. Much of the art reproduced here is text-based; some words in these works are traditionally profane. This is also an issue about what words can, and can’t, do. Words tend to be inadequate, as artist Jenny Holzer asserted in a well-known work—so why not use them to open dialogue and express uncertainty?

This post is adapted from “This Issue” in the Spring 2018 edition of our magazine.