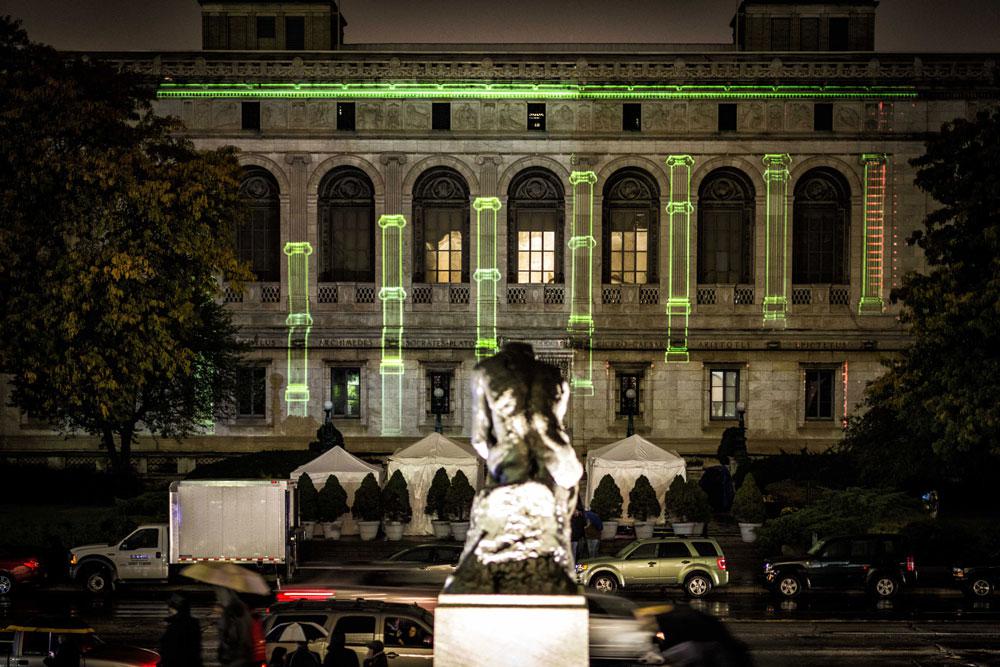 Something’s happening in Detroit. The case shouldn’t be overstated—the city is still in ruins. (Those arriving by car from Windsor over the Ambassador Bridge tend to take a route into the city that includes a swing past its large, looming, decades-abandoned Beaux-Arts train station, Michigan Central: Detroit Gothic at its finest.) Yet as the New Yorker’s David Denby recently wrote in his rave review of the new documentary Detropia, “ruins…often strike us as magnificent.” And of course such ruins—here brought about by the unforgiving boom-and-bust cycle of American capitalism—can prove fertile ground. The current downtown-Detroit banner of New Jersey–based IT company GalaxE.Solutions (which, two years ago, set up shop at 1001 Woodward Avenue) speaks volumes: “Outsource to Detroit.” It’s a new-economy provocation, and also a battle cry. Perseverance, it seems, defines the Detroit spirit.

Last weekend, that spirit was in evidence farther north on Woodward Avenue during Dlectricity, Detroit’s first Nuit Blanche–style event. Centred around the Wayne State University campus, the renowned Detroit Institute of Arts (DIA) and the new Museum of Contemporary Art Detroit (MOCAD), Dlectricity took place on the same weekend as New York’s and Paris’s Nuit-style events. Friday night was a bust, with the rain and cold detracting from attendance and proving problematic for the festival’s dozens of outdoor light- and projection-based works. But by Saturday, the rain had cleared, and Woodward became flooded with people.

Many of the works in Dlectricity suffered from typical Nuit Blanche syndromes: overreaching concepts that failed in execution, and the opposite, flickering light-sculptures that did little more than flicker. (Corporate brands like Vitamin Water were also part of the mix, handing out samples at the event.) Still, the crowds were Dlectricity’s major feat. A Detroit thoroughfare had been filled with the pedestrian traffic it was meant to attract.

Dlectricity’s best works seemed to blend with the surroundings—accents to the experience of simply being out in the city, a probable novelty for a portion of the suburban teenagers, families and couples that commuted to the event. At the DIA, Tsz Yan Ng built a mirror structure across from Tony Smith’s 1961 grounds sculpture Gracehoper, highlighting the original’s uncanny, extraterrestrial qualities. Across the street, at the gorgeous public library building, Gabe Hall, Daniel Land, Audra Kubat and Gabe Rice of the collective NewD Media hosted a spectacular facade projection about nothing less than “the human story of knowledge.”

One’s social experience of Dlectricity gravitated towards parties in and around MOCAD, a curious, bunker-like building opened in 2006, and with a graffitied facade courtesy of San Francisco street artist Barry McGee. MOCAD’s programming is growing substantially in interest and relevance to contemporary-art audiences. A recent collaboration with the UK’s Artangel, for instance, brought one of Mike Kelley’s last major projects, Mobile Homestead—a commentary on the “white flight” of many Caucasian families after the 1967 Detroit Riot—to fruition. This full-scale replica of the artist’s childhood suburban home in Westland will be installed at MOCAD in 2013, where it will function as a community centre.

Aside from a pair of Anri Sala videos, MOCAD’s Dlectricity-night exhibition was “Vision in a Cornfield,” a remarkable example of Detroit’s creative vitality through the decades. The exhibition, on to December 30 and co-curated by M. Saffell Gardner, Cary Loren and Rebecca Mazzei, brings together three locally based groups: Destroy All Monsters, Ogun and Apetechnology. Kelley, in his early career a member of Destroy All Monsters (a psych-art band founded in Ann Arbor), again emerges, providing, with Loren, a major inspiration for the show. More than 10 years ago, the two were scouting locations for a film in nearby Fowlerville, and they came across an abandoned car in the middle of a cornfield, which was still running, illuminated, and emitting noises both regular and irregular, UFO-style. Kelley and Loren filmed the car and planned to do more—a sculpture of some sort. That plan, in the works since 2002, has finally materialized here with the aid of Aaron Ibn Pori Pitts and his Ogun collective, who, in a gesture particularly resonant in auto-industry-shaped Detroit, have for years been turning abandoned cars into painted and object-filled African fetishes. Ogun’s car-art is scattered throughout MOCAD’s main space, accented by corn stalks. Apetechnology, a trio of new-media and robotics artists (who also made a spinning robot in front of the DIA for Delectricity), animates the cars. Lights flash; frames pop up and clatter; hoods and trunks jangle open.

With its supplementary components including Destroy All Monsters zine and gig ephemera, as well as Aaron Ibn Pori Pitts’s collage paintings, “Visions in a Cornfield” is a landmark exhibition for MOCAD. It’s an airing of the city’s rich street artistry in an accessible institutional context—an important act for its consolidation of white and black, punk and funk, suburban and urban.

And it’s fun, too—just like Detroit, whose apocalyptic qualities increasingly allow it to act as a sort of playground in which new art and small-business models might frolic. Dlectricity aside, a list of Detroit art destinations is now considerable: the Imagination Station, houses by Michigan Central which were rebuilt as art spaces, and which recently burned down and are being rebuilt again; Tyree Guyton’s famed Heidelberg Project, a massive derelict-neighbourhood installation whose significance as a contemporary American artwork cannot be overstated; the outside installations at the MBAD African Bead Museum on Grand Avenue (by the Motown Museum), with its spectacular, sprawling, mirror-mosaic African Language Wall. And these are just three projects amid the hundreds, many of them illegal, that can’t be named and ascribed. Marvin Gaye once famously said, “Detroit turned out to be heaven, but it also turned out to be hell.” More and more, the reverse also seems true.