It has been more than 30 years since A.A. Bronson published his seminal piece on artist-run centres. How would this article read if it were written today? 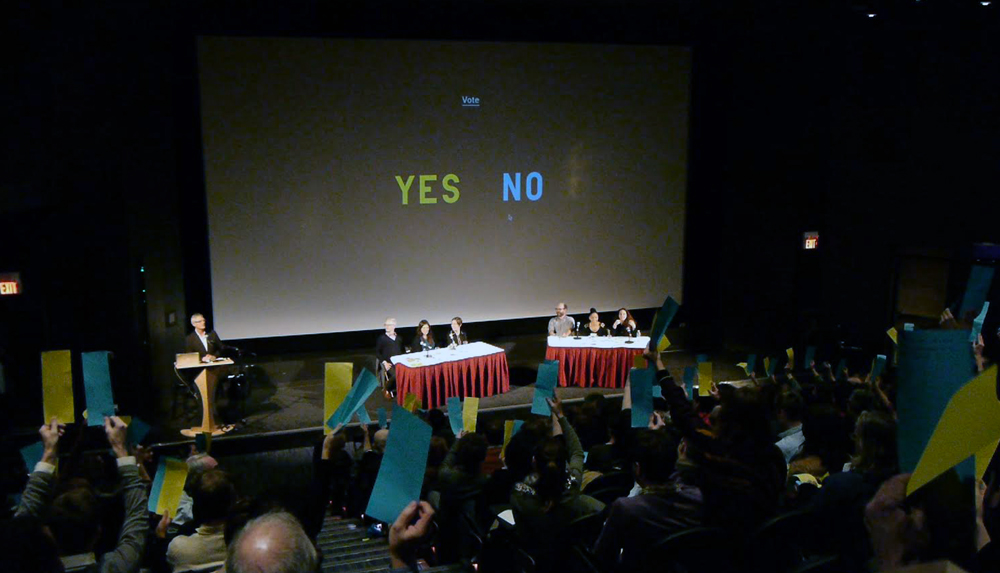 by Nicholas Brown and Jaclyn Bruneau

In the 45 years since Canada’s first artist-run centres (ARCs) were established, they have grown into a network of institutions unto themselves. Over 30 years ago, A.A. Bronson published The Humiliation of the Bureaucrat: Artist-run Centres as Museums by Artists, which delineates the intentions, processes and forms of ARCs across Canada. But how would this article read if it were written today? It’s time to take stock of ARCs in our present moment, questioning their function within an increasingly connected, digital era.

Canadian Art contacted a number of individuals across the country who are deeply engaged in ARC culture and an array of contingent, artist-initiated exhibition spaces. These arts workers reflect different generations, geographic locations and levels of experience with artist-run culture. What follows is a sampling of their responses to our questionnaire, divided into two parts.

If artist-run centres are the “connective tissue” (to use the words of A.A. Bronson) that links artists across the country, what can you say about their differences between regions?

Craig Leonard (artist, Halifax): Things have changed immensely since A.A. Bronson used the term “connective tissue” in 1983…. The Internet, ironically, has eroded that ARC connection and in many ways normalized each ARC’s identity. That said, in my experience, the role of the ARC functions like a “community centre” that hosts not only visual art exhibitions, but events of all sorts. Therefore, the programming of ARCs both directs and responds to its community members’ interests.

Chris Gehman (filmmaker and writer, Toronto): The histories of ARCs are informed by local histories and needs as well as by the more general principles and politics that they share. ARCs in larger centres are often more specialized—operating specifically as a gallery or a production centre or a distributor—while those in smaller centres are more likely to fulfill a broader range of functions under one roof.

Chris Lloyd (artist, Montreal): Canada as a whole is comprised of many distinct parts, and in a way ARCs operate as a kind of “artist-sparrow in the national identity mine.” Take the East, for example…I mean the East Coast, such as drive-through New Brunswick, small PEI, even-smaller-still Cape Breton and larger, but more isolated, Newfoundland. This east is home to a very distinct ARC network whose principal “connective tissue” could be a shared feeling of abandonment and chronic under-funding. ARCs in these regions do more with less. In my hometown of Saint John, NB, there was no ARC until I started one, first in 1997 and then again in 2005. ARCs in far-flung regions pay fees and run themselves professionally, but party with unique, hometown flavour.

Simon Schlesinger (co-founder of 8-11, Toronto): I have to ask, at this point, what does it mean to exist in and work to build connective tissue of a nationally centred network, in the context of a growing (or so I hope) awareness of the colonial history and denial of Canada? Increasingly, I find it impossible to consider community, and particularly any nationally centred community, without considering their endorsement of the colonial state. If ARCs developed out of a need for representation, as well as for interconnectedness, then we must consider any network connected to serve national-unity under the colonial state to be necessarily exclusionary, despite professed goals of, say, national organizations to seek “inclusion.”

Jesse Birch (curator, Nanaimo Art Gallery): Some of the most exciting programming developed by artists happens in the precarious spaces that arise out of chance and initiative. These projects, in contingent spaces, rarely last more than a few years, but they are often able to respond immediately to shifts within their artistic communities. One of the most exciting things about these spaces is that they are free to be completely (and at times deliberately) unprofessional. By unprofessional, in this context, I mean not having to satisfy the requirements of funding bodies, board agendas, historical mandates, or the market. However, while it is easy to romanticize these projects, in their precariousness they also point to the challenges of working as an artist in Vancouver’s overheated real-estate market.

One of the defining characteristics of ARCs since the early ’70s seems to be institutional critique, with ARCs defining themselves against the museum and the commercial gallery. Does this still hold true with the “professionalization” of ARCs, where curators now serve as directors and board members include gallerists and collectors from the private sector?

Craig Leonard: That’s true, but with qualifications. Most ARCs understand that an “anti-institution” is really another form of institutional organization, so institutional critique is not anarchic to the degree of total “anti-administration.” (Clive Robertson’s study Policy Matters points this out well.) Also, “professionalization” need not be negative if the activity of individuals in these positions is still driven by critical thinking. So, I don’t believe professionalization and institutional critique are mutually exclusive.

Chris Lloyd: The ARCs in Quebec have been “professionalizing” for a long, long time: they benefit from strong provincial funding but also took to owning what “professionalisation” means. For them, it means a deep respect towards paying artist fees, and a deep belief in supporting research, creation and experimentation. And while some seem to have veered closer in size and composition towards museums (or “institutes”), their inherent genetic makeup remains closer aligned with supporting living, breathing, working contemporary artists, and often emerging artists.

Maya Beaudry (co-founder of Sunset Terrace, Vancouver): For a lot of the people involved in the younger spaces (those that don’t receive funding), the current model of the publicly funded ARC can seem both unattainable and unappealing. The skill set that’s required to manage a non-profit is not necessarily in synch with the mindset of someone trying to build up a studio practice, and so the people who end up pursuing these administrative positions often sacrifice their art practice in the process.

Dagmara Genda (artist, Saskatoon): I think institutional critique as a whole has taken a turn toward irrelevance. Critique has come to have a cultural cachet that can bolster rather than undermine the system. I’m more interested in the artist-run centre as a place that is accessible to professional artists of all levels wanting to engage in a self-determining system.

Jesse Birch: Being a professional curator often means responding to shifting contexts and working in dialogue with the practices you are supporting, therefore I don’t think hiring curators necessarily hinders ARC’s abilities to provide an alternate context for artistic production. Being a professional curator also requires a high degree of criticality and self-reflection; most ARC curators endeavor to support practices that are under-represented, and define the unique roles of institutions while facilitating experimental practices.

What is the best role for ARCs now? Can they simultaneously propel artists while fostering community and a risk environment for art practice?

Chris Lloyd: Yes, but to propel artists where? To NYC or LA? There needs to be an emphasis on fostering communities where those communities exist. So the question should be, How does one measure success? Do we as artists prioritize big urban centres for their concentrations of galleries, dealers and collectors as well as our peers? Is it a disservice to smaller communities and regions? The model I prefer is that ARCs help make it possible for visiting artists to visit these magical areas, to interact with locals while sharing art that is vivid in an international context.

Dagmara Genda: I think each ARC will foster a different role. Some are closely tied with technology and function as centres for workshops, sharing practical skills, and providing space and equipment. Others might hold a more discursive function by focusing on publications, panels and discussion. The thing that is most important for me is their ability to connect with arts professionals directly so as to provide a reactive forum for dialogue and experimentation. In an ideal world, however, they can act to facilitate the interests of a given community as well as bring in practitioners and work that might be of direct relevance to local cultural producers—both via affinity and contrast.

Chris Gehman: Younger artists now tend to make work and make it visible using the Internet and web-based tools, hoping for commercial work to come along to help pay the bills. This inevitably leads the emerging artist toward production for the market… ARCs, in principle, offer an alternative, parallel environment that can support a different kind of artmaking. However, ARCs can also become complacent and repetitive, just as any institution can, large or small. They may be insulated from the pressures of the commercial market, but in this situation funding bodies become a de facto market, and shifting governmental priorities and systems can end up determining what centres do to a greater extent than is healthy.

Maya Beaudry: I think that in Vancouver there will always be new, unfunded ARCs popping up and disappearing, and the surviving ones will be constantly evolving, simply because of the unstable nature of real estate here. The studio/gallery model is particularly appealing for people coming out of school, who are in need of both cheap studio space and exhibition opportunities, and who are accustomed to working in crowded, communal environments. Being aligned with a group of peers can give some context for an artist’s work, and, as a space starts to build an audience, the possibilities for experimenting with performance, installation, and weird, uncategorizable endeavors get really exciting.