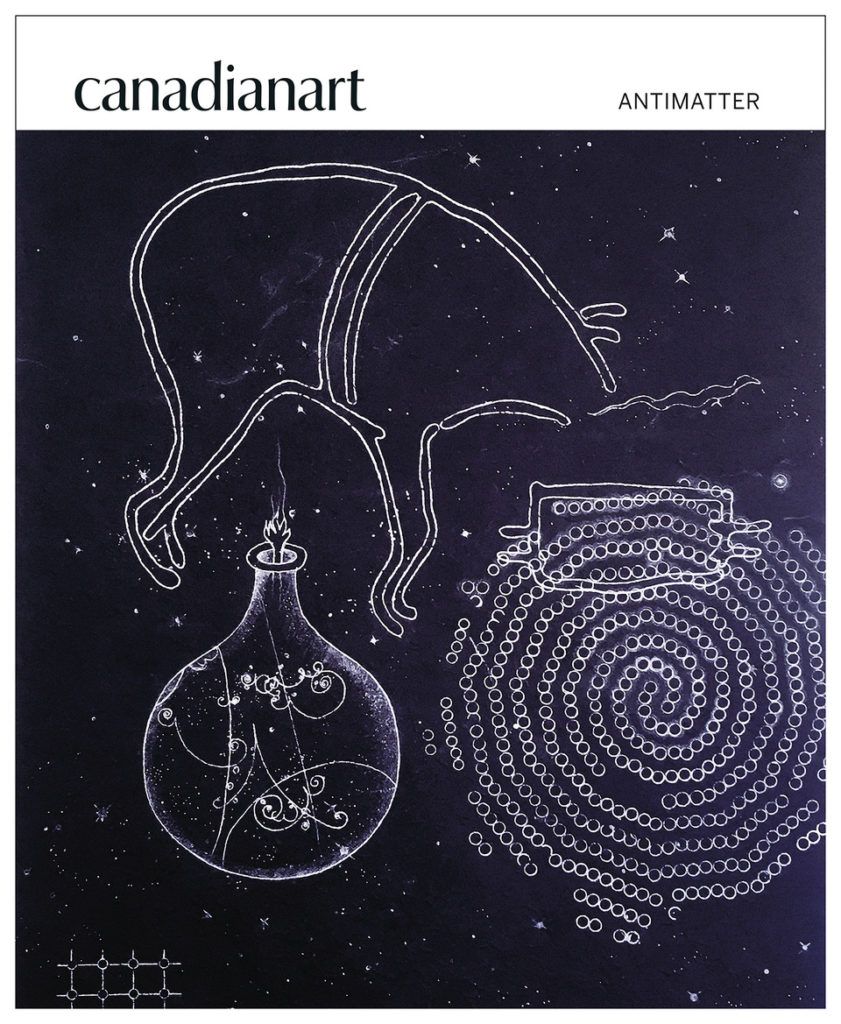 We’ve taken some interpretive, some poetic liberties in considering antimatter as a concept. Antimatter is weird. It presents a mirror world of abstract phenomena: time reversals, mutual annihilation, cosmic rays, cloud chambers, an infinite sea of sub-atomic particles that parallels our “real” world of matter. Alongside physicists and researchers, the artists in this issue are thinking about systems, ecologies, erosion, alchemy—the changing forms of matter that reveal visible and invisible worlds, tiny details and wide vistas. For many, exploring dark voids—or what Quinn Latimer calls “the glittery political-ecological apocalypse all around us”—is a feminist, or feminized, practice.

From landscapes of extraction mined for pleasure rather than capital (New Mineral Collective) and the spatiality of Indigenous presence (Sky Hopinka), to the sensuality of systems (Azza El Siddique) and collaborations between particle physicists and artists (Randy Lee Cutler and Ingrid Koenig), this issue explores what’s possible when artists and scientists think together about the beyond-visible world. And as the earth’s troubled systems continue to trouble us, there is some urgency in evoking the mysterious, dark matter of the universe.

An Alchemy of Remains

Sky Hopinka speaks about moving on the land, Indigenous presence and relations that collapse time and space

If the Body Is an Assembly, How Does It Assemble?

In a personal account, an artist, runner and scholar considers space and the everyday, in theory and creative practice

For both Hanne Darboven and Madeline Gins, a kind of personal mathematics became a method of reading and writing their art

by Douglas Cardinal and Tiffany Shaw-Collinge

A national survey of 10 artists who are reforming material practice