What Is the New Newfoundland Dream? 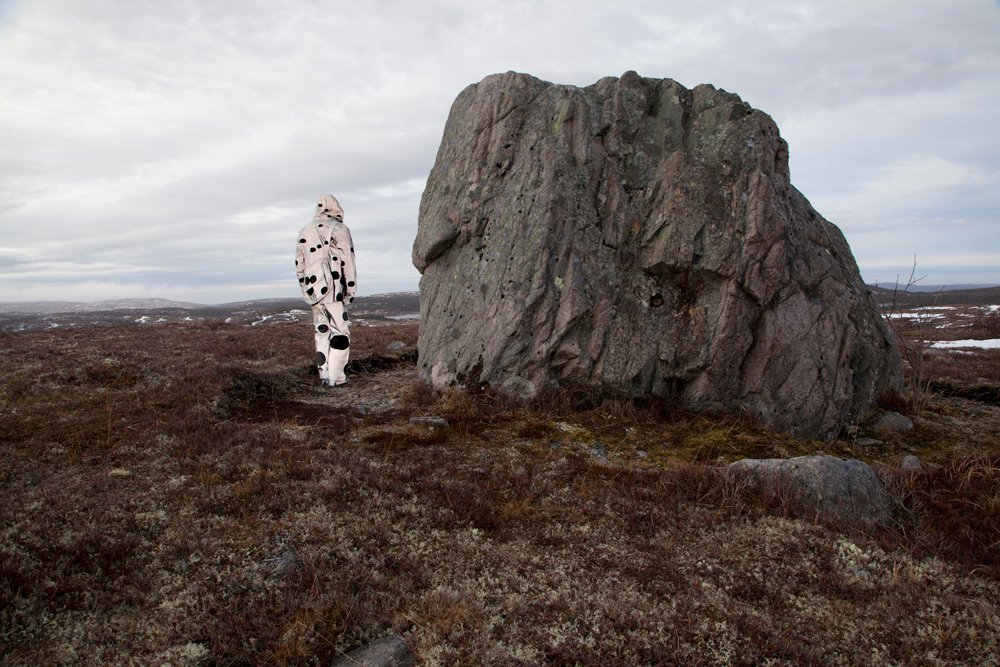 What does Newfoundland dream about now? This is one of the questions put to the artists contributing to the exhibition “Land of Mirrors: Ongoing Experiments in Newfoundland,” curated by Mary MacDonald at Eastern Edge Gallery.

Either way, a wilful dreaming is evoked. Newfoundland is a malleable idea, constantly being dreamt and reconfigured. The question also hints at the fanciful, mildly surreal aesthetic throughout the exhibit. MacDonald and the five artists, Will Gill, Jason Wells, Jerry Ropson, Michael Flaherty and Philippa Jones, are intent on exploring a new Newfoundland.

All cultures are in constant flux, of course. But Newfoundland, hyper-aware of being a distinct society, is at the same time riven with a kind of archival anxiety to hold fast to defining myths; the stories we tell to bring ourselves into existence. This anxiety might be a symptom caused by existing on the periphery, subject to constant swings in economic instability and geographical isolation in a sublime but rugged beauty.

How does such a culture dream itself new? Especially at the very moment when our singularly short-lived have-province status has been stripped away due to plummeting oil prices and the burgeoning costs of developing the new hydroelectric plant, Muskrat Falls. The civil sector, including all provincially funded organizations and services, awaits the possibility of very deep cuts in the coming months, and the arts stare down the barrel of an enforced shotgun marriage between public and private sponsorship.

The response to this present Newfoundland at Eastern Edge Gallery is visually jokey—subtle and at the same time ultra-serious. Throughout the exhibition, there is a sly articulation of the claustrophobia caused by isolation and even the sense of belonging—or the less acknowledged, more disturbing sense of not belonging.

Will Gill’s large-format photographs are of himself wearing a hooded, full-body suit, like Hazmat or survival suits, with patterns of dazzle camouflage. Stripes, black polka dots, fluorescent pinks. Dazzle camouflage was painted on the exterior of ships during the First World War. Rather than attempt to conceal, the eye-smarting geometric patterns were meant to confuse the enemy. The graphically bold and optical-illusion-provoking designs made it difficult to discern the direction a vessel might be headed, or whether it was a cargo vessel or battleship. Some of the patterns included black-and-white zig-zag designs like zebra stripes.

Gill placed himself in dramatic and vast landscapes—some of the photographs from this series (only a few were included in this exhibit) were shot during a residency in the Arctic, others at Cape Spear, still others in the barrens—where he created a jarring presence because of his gaudy and sometimes fluorescent suits, and at the same time appeared dwarfed by the stark and sublime natural settings.

The eerie, spiritual atmosphere in these photographs—in some, Gill is kneeling as though in prayer—creates a profound sense of solitude. There is also something of the fool or clown in these lone figures: the dazzle of a court jester.

Gill’s photographs also play with the notion of landscape—a habitation we might be an integral part of, instead of a vista we stand apart from to gaze upon. There’s also a sinister dystopian environmentalism hinted here, akin to Margaret Atwood’s MaddAddam trilogy. So startling are these images, one wonders if Gill is the only soul left in these inhospitable, magnificent, empty landscapes. Can he breathe the air?

Gill says that the suits capture what it feels like to live in a place where he understands his status of belonging is often ambiguous, because he is a “come from away,” as the phrase goes in Newfoundland, to describe those not born in the province. Gill’s photographs broach an insularity that is equivocal and paradoxical in his wide-open landscapes.

Jason Wells explores ideas of trust, intimacy and belonging by asking the viewer to take up a pair of scissors and cut pieces of latex from the face of Irma Gerd, a drag queen Wells performs. The surgery requires digging the tip of the scissors into a facial mask of layers of latex and snipping to reveal the skin beneath. The viewer was encouraged to walk away with the small piece of “skin” as a memento.

At the exhibition opening, Irma wore a sequined watermelon wedge on her head and there was a shattered mirror on the gallery floor at her feet. Irma’s large blue eyes glanced coquettishly at the scissors, nearing her eye, the tip of her nose. The work was reminiscent of, perhaps even a revamped re-enactment of, Yoko Ono’s Cut Piece, a conceptual performance during which the audience was invited to cut away Ono’s dress, leaving her naked. Cut Piece has been re-enacted by many other performers, including Ono herself, recognizing how the shift in context, the passage of time and change in location alters the meaning of the artwork. As with Ono, Wells remained mostly still during the performance, though when spoken to, he exchanged quiet remarks.

The act of touching another’s face with scissors to cut away a tough, rubbery mask and reveal flesh that looks comparatively tender and flushed, alive and naked (and to be one of many, in a celebratory crowd at an art opening while doing it), evoked intimacy and anonymity, as well as questions about identity, gender, appearance, what can be shared with strangers, and, as with Gill’s dazzle camouflage, what can be concealed by a costume—in this case, a false layer of skin. At a moment in Newfoundland when LGBTQ rights are a foremost concern in the media and in art galleries, universities and high schools, and with the emergence of new feminist groups such as Spaat, this performance piece adroitly addresses subtle and poignant realities about belonging in the face of chosen performances of gender.

Jerry Ropson’s installation for “Land of Mirrors” was created over six days in the gallery and parodies museology and the practices of collection, cataloguing and display. He explores the archival anxiety of preserving the particularity of a distinct culture, and the fool’s errand it sometimes becomes.

Ropson has created a series of faux-archaeological implements made of wood and ceramic pieces that have the appearance and coloration of bone, wrapped with a fathom of twine, the length of which can be measured by the span of a person’s outstretched arms, from fingertip to fingertip. The viewer tries to guess at the purpose of these implements. Might they be for food preparation? Hunting implements? Are they magico-religious ceremonial paraphernalia? Ropson’s palette is black and white with a red ochre that suggests blood, sacrifice and ritual. The text reads, “All of This Culture is Death Culture.”

Ropson has also painted a number of turnips black so that they resemble unearthed and ancient cannonballs. These turnips have also been drawn on the wall above the three-dimensional objects. The installation is full of specimens of the dead and imaginary culture Ropson has created, including a dark flag with a black circle at the centre, which the gallery label states is the borrowed flag for the Turnip Republic. When I spoke with Ropson at the exhibition’s opening he explained, humorously, that the turnip might be the quintessential food of Newfoundlanders.

“There it is,” he said, “Sunday dinner, lots of butter.” The turnip is known for its hardiness; a vegetable that can thrive in the relatively thin layer of soil that covers much of the province. In these times of economic decline, the blackened and withered balls along the floor of the gallery and the red ochre–coloured spatterings on the wall made me think of how impossible it is to get blood from a turnip.

Michael Flaherty’s blurred images of ceramic shards collected in the ghost towns of resettled communities and photographed through water also reference a kind of museum practice of collecting, and an archival desire to preserve a lost Newfoundland, washed away in the wake of modernization.

The blurring of these shards, morphed by the mediation of the rippling film of water that washes over them, works as an elegant metaphor for forgetting. The soft edges of these ceramic pieces, like dissolving memories, evoke the erosion of the life-world of these resettled communities. The social and kin connections, work practices and skills, passed down for generations, can be only roughly recalled through these mementos. Flaherty’s images are abstract, but suggest the morphing action of the water and the political machinations that relocated these communities.

Philippa Jones’s installation A Study into the phenomena of the Newfound Bubble captures the isolation of living in a town on an island in the North Atlantic, especially under the smothering, claustrophobic blanket of winter, when air travel is often thwarted and even a trip to the bar becomes a mythic voyage. Like the layer of water over Flaherty’s ceramic shards, Jones shows St. John’s through a translucent veil, in this case an enveloping bubble that contains and entraps its citizens.

Jones’s work is alive with wit and meta-fictional satire. She is an adroit draftsperson, (mimicking the realism of scientific ink drawings used to categorize natural specimens or for the creation of maps), but displays an ease with any medium. Her work is often interactive, engaging wide audiences on her website, MIRIAD, which stands for Ministry of Intuitive Research in Imagined and Actual Discoveries.

Jones’s Bubble invites viewers to map the radius of their daily travels through the city in order to prove how the lives of the inhabitants of St. John’s are limited by the invisible (and hopefully imaginary) titular bubble. The way that fantasy and pseudo-scientific practice mix to prove the existence of the bubble is overtly charming, but as with Flaherty and Wells, Jones makes reference to a kind of membrane, skin, watery sheath or border that defines and contains the new Newfoundland.

It is interesting to note, thinking back to Gill’s dazzle camouflage, that a zebra’s stripes are most effective in warding off predators when a herd of zebras gather close together so that the stripes seem to join. It creates the illusion that all the individual animals are a single, giant being, impossible to take down. The new Newfoundland this exhibit dreams about is a utopic island with porous borders, allowing for inhabitants of all stripes.

Lisa Moore has written two collections of short stories, Degrees of Nakedness and Open, and three novels, Alligator, February and Caught, as well as a stage play, based on her novel February. Lisa’s most recent work is a young adult novel called Flannery. Lisa's work has been translated into French, Italian, Spanish, Russian, German, Turkish and French. She has studied conceptual art at the Nova Scotia College of Art and Design. Alligator and Caught, and her short story collection Open were nominated for the Scotiabank Giller Prize. Her novel February was long-listed for the Man Booker Prize and won CBC Canada Reads in 2013. She is also the winner of the Writer’s Trust Engel Findley Award for Fiction and the Commonwealth Writers’ Prize for the Canada/Caribbean region. Lisa has written for the magazines Canadian Art, Walrus, and Elle, as well as the Globe and Mail, the National Post and the Guardian.