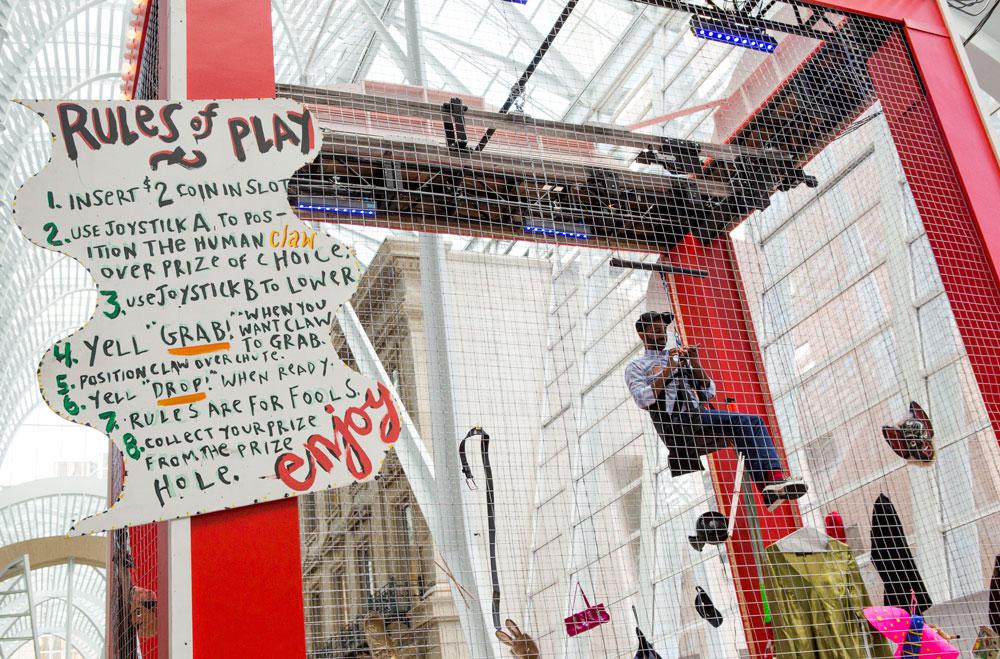 This past month in Toronto, a massive cage piled with hundreds of pre-loved objects stood in the middle of Brookfield Place’s Santiago Calatrava–designed atrium. It was part of an interactive performance installation called Stockpile, an oversized version of the claw-machine games sometimes found in video arcades, movie theatres or shopping malls. The title amusingly made reference to the stock-market variations that are usually in the minds of people passing through this financial-district space—and the work certainly came with its own ups and downs.

The site-specific installation was created by nine artists—Dean Baldwin, Brendan Fernandes, Diane Landry, Luanne Martineau, Divya Mehra, Graeme Patterson, Ed Pien, Charles Stankievech and Mitchell Wiebe—all of whom were among the 60-plus artists included in “Oh, Canada” at the Massachusetts Museum of Contemporary Art. Working with “Oh, Canada” curator Denise Markonish under the auspices of the Luminato Festival, they created an installation that was based on negotiation and collaboration between artists and visitors, as well as between the artists themselves, who met four times over three months to reach consensus on the work.

Passersby were free to observe Stockpile or could pay two dollars to participate by working the “claw.” And the “claw” essentially was the artists, who took turns being hoisted up and down by a pulley system connected to two joysticks that moved them up, down or sideways before a player’s time ran out. Though any player had some influence on the game’s result through the joysticks, it was ultimately the artists who were in control; using a pair of enlarged tongs to grasp various treasures and drop them in a prize dispenser, they decided the fate of pre-owned objects such as a prosthetic arm, a narwhal’s tusk, a never-used Polaroid camera or a plastic kiddie pool.

During Stockpile’s nine-day run, participants ranged from an eager 10-year-old longing for a Spider-Man mask to a businessman on his lunch hour trying to win a giant inflatable shark. Some players came back repeatedly in hopes of securing specific items. One woman’s win was an engagement to her partner, who proposed by hiding a ring in the prize dispenser. (She accepted.)

Many of the art trophies doled out in Stockpile were donated by the community—it was stuff you might once have loved, but no longer wanted. In a reciprocal gesture, the money collected during the installation/performance was donated to various non-profits, transforming Stockpile into an opportunity not only to satisfy (or cull from the discards of) consumer desire, but also to provide tangible benefits to those in need.

Some viewers watching Stockpile may have thought of the scene in Toy Story when Buzz Lightyear finds himself inside a similar game. In the movie, the crane/claw is worshipped by an army of lime-green squeeze-toy aliens who hope to venture into the outside world. In Stockpile, the pre-owned objects were venturing into the art world. They were also venturing into a metaphor for our current economic system, where the illusion of freedom of choice supports systems in power.

Besides its filmic and financial inflections, Stockpile also embraced our pop-cultural obsession with winning and losing, evoking connections to reality television, the Olympics, game shows, the Oscars or the Stanley Cup playoffs. In Stockpile, however, no contestant left empty-handed. Those who did not win a prize took home a gorgeous certificate with gold foil-stamped letters spelling out “Please try again LOSER” and signed by the participating artists.

Some of the artists also took advantage of the interactive performance to engage with visitors, making costumes and creating characters that developed during the installation. Graeme Patterson could be seen covered in feathers, wearing an owl mask and swinging back and forth in the cage above the pile of donated stuff. All nine artists wore blue vests (complimented by a Stockpile logo badge) in a white-collar business environment. A list of rules was secured to one side of the machine, the seventh item being “rules are for fools,” thereby playfully undermining the game’s guidelines and perhaps suggesting that, in certain cases, rules are not fixed but contingent on context.