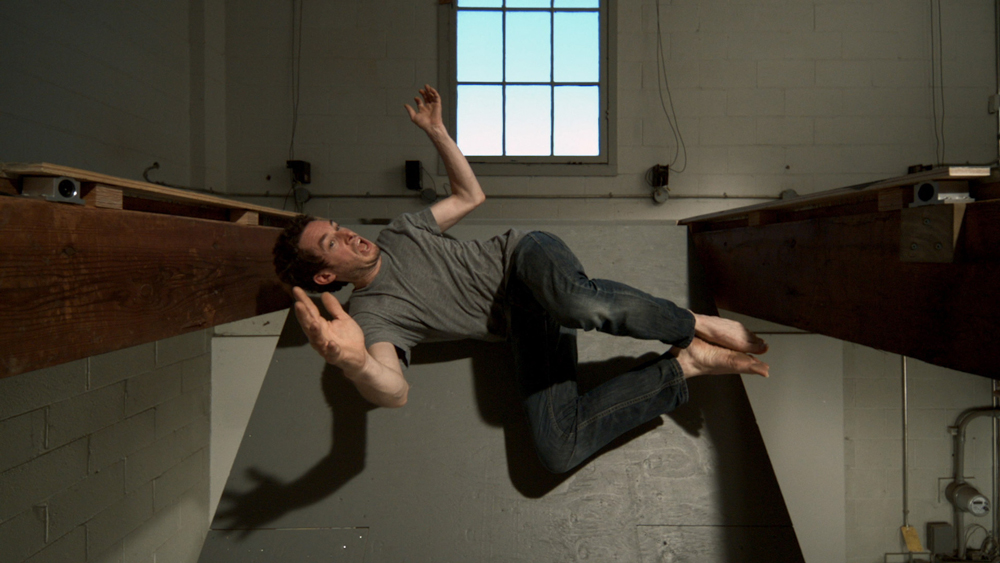 In Scott Billings‘s looping video installation, A Risky Jump, he doesn’t actually jump. He falls. Very. Slowly. As he falls, the video projector falls with him by slowly tracking down a long aluminium column from ceiling to floor, producing a motion picture that moves down the gallery wall. The column functions as a metallic spine with a cable connecting the brain-like computer at its base to the eye of the moving projector. The mechanical animation of the apparatus both imitates and enables the extreme slow-motion drama of Billings’s body falling 13 feet through a trap door.

The visceral effect of watching image and machine move in synch is uncanny, the return of something deeply familiar in an unexpected and strange form. In Billings’s work, it is not just this experience of familiarity and strangeness that is intriguing, but the gap between the two.

His slightly misleading title, A Risky Jump, comes from a quote by the Russian filmmaker and theorist, Dziga Vertov, in which he recounts a jump he did on camera and his experience of not recognizing his own face when watching the film in slow motion. In spite of this alienating experience he was struck by how clearly his facial expressions revealed inner thoughts of “irresolution, vacillation, and firmness.” The face was strange but what it displayed was deeply familiar.

Does cinema reveal the invisible? Vertov certainly believed it did and Billings’s piece shows the action of falling in a way that is impossible without film technology. As the trap door gives way beneath him, his body initially floats like Wile E. Coyote after running over the edge of a cartoon cliff, and then it drifts incrementally through the long gap beneath the trap door and above the crash mats. The flesh of his contorted features, pale bare arms, and sockless feet is captured with the kind of detailed clarity seen in a Giuseppe Ribera painting of some tortured saint. Eventually, his face relaxes as he stops rebounding off the soft black mats and hidden cardboard boxes on the floor.

This action is fascinating to witness, but the work exceeds its own formal constraints, suggesting more. It is more than a carefully framed exercise in structuralist cinema. There is poetry. Watching his body drift through space via this slow-motion apparatus feels very different than many other possible stunts would. This action feels more “existential.” Many people have sensations of falling, flying, hovering or levitating while dreaming—what aspect of the human psyche finds this common psychological experience so compelling? Is it merely some vestigial animal impulse or does it also resonate on the level of metaphor or allegory? Billings’s uncanny video apparatus is more than what it appears to make visible. We are launched into the void and we proceed through it, moment by moment, hoping to land softly.

Sean Alward is a Vancouver artist. He received his MFA from the University of British Columbia and has exhibited across Canada and the US, most recently at the Art Gallery at Evergreen in Coquitlam, and WAAP/Vacation Gallery in New York.