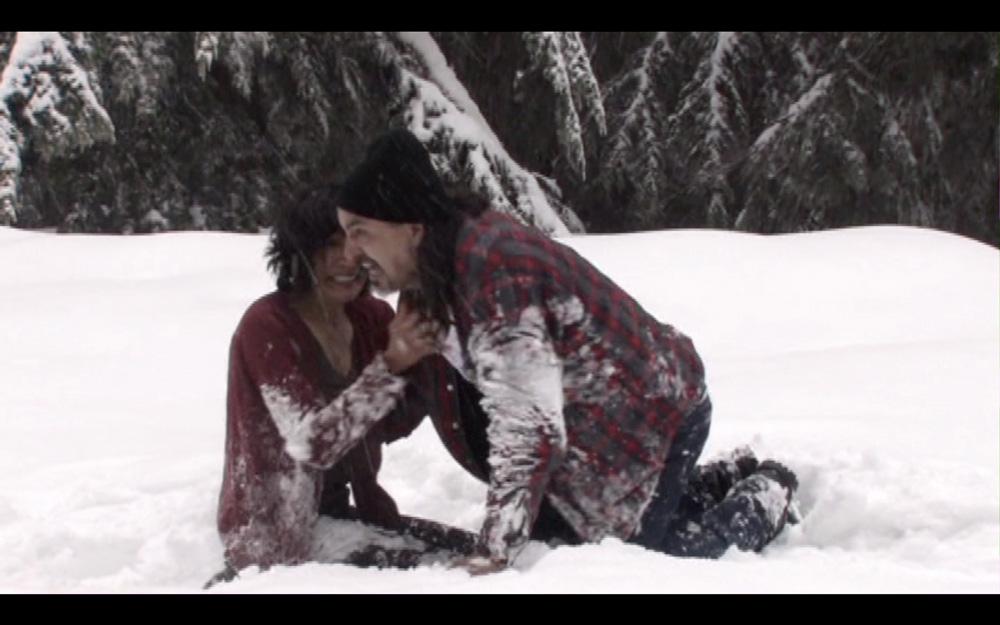 Rebecca Belmore has created some of Canada’s most haunting artworks on the subject of colonial violence and its living legacy. Her current exhibition at the Carleton University Art Gallery, “What Is Said and What Is Done,” underlines her accomplishments in this respect.

The first work viewers encounter revisits a particular time and place: March 5, 1819, at Red Indian Lake in Newfoundland. This powerful two-channel video installation unfolds on parallel walls, with two hand-held cameras following the struggles of a man and woman being chased through a snowy forest. Sometimes, they trudge together; other times, they desperately reach out to each other from facing projections. The gallery is filled with the sound of snow crunching underfoot, heavy breathing, running, screaming and eventually, a gunshot, as the man is killed by a perpetrator, never seen or heard on camera. The woman, devastated, falls to her knees, shedding tears while the dead man lies in the forest, slowly being enveloped by falling white flakes.

This installation, March 5, 1819 (2008), re-enacts the story of Demasduit (later renamed Mary March), a young Beothuk woman who was captured by English settlers and whose husband Nonosabasut was killed while attempting to protect her from abductors.

What does it mean to re-enact an event of the past in the present? While the title seems to situate the piece in time, the actors are dressed in contemporary clothing. The work also lasts less than three minutes, looping repeatedly to evoke a perpetual distress. In this way, it reaches beyond a singular event, connecting the struggles of historical indigenous peoples to present ones; it also references endless cycles of violence and trauma. At the close of each loop, an eagle spreads its wings against a grey sky, like a dark cloud haunting the tragic history of the Beothuk.

“By placing the viewer in the middle of this trauma, I was casting the gallery visitor in the physical role of witness and perpetrator,” Belmore explains in an interview with Lee-Ann Martin from the Spring 2012 issue of Canadian Art. Indeed, in March 5, 1819, no one other than the viewer is around to clean up the mess colonial violence has left behind.

Later, in the 1820s, Demasduit’s niece Shanawdithit drew maps and illustrations of various encounters between the Beothuk people and English settlers, trying to understand and record the history of those who, like her aunt and uncle, disappeared without a trace. Shanawdithit, the Last of the Beothuk (2001) is a poignantly simple and austere tribute to her story, which ended with her dying in captivity as the last known member of her tribe. In it, two stone feet rest on the gallery floor, close to two stone hands placed on a shelf. The impression is of an invisible woman kneeling on the floor and looking out of an imaginary window in the wall.

Shanawdithit lived for a few months in the St. John’s home of William Cormack, president of the Beothuk Institution. At one point, she gave him a piece of quartz and a lock of her hair as a keepsake. Belmore revisits this anecdote by attaching pieces of long dark hair to the place where Shanawdithit’s wrists would have been resting on the “windowsill”; these strands appear to be growing out of the hands themselves. Belmore calls attention to Shanawdithit’s absence by means of a rock-solid presence, with hands and feet that could enable her to grab onto or stand firm upon her people’s past.

Belmore’s poetic memorial also brings to mind the often decontextualized aboriginal objects displayed in museums as artifacts. Where these artifacts often serve to further perpetuate conceptions of Aboriginal peoples as “primitive” or vanishing cultures—rather than living communities—Belmore’s work reconnects Shanawdithit’s absent body to the land and story of her ancestors.

Other works in the exhibition include The Great Water (2002), a black canoe that has been tipped over and covered with thick black fabric, and Untitled 1, 2, 3 (2004), three large photographs that show a woman hanging upside down, contorted or pinned to the wall. White fabric is wrapped tightly around her body, at once cocooning and protecting, controlling and suffocating.

“History decomposes into images, not into narratives,” suggests Walter Benjamin. Belmore is a storyteller, and her poetic and powerful visual language performs this. Perhaps art cannot change what has been done, but Belmore creates a past in the present and leaves her viewer with images that help us remember those whose stories are often excluded, forgotten or swept under a disquieting blanket of snow.