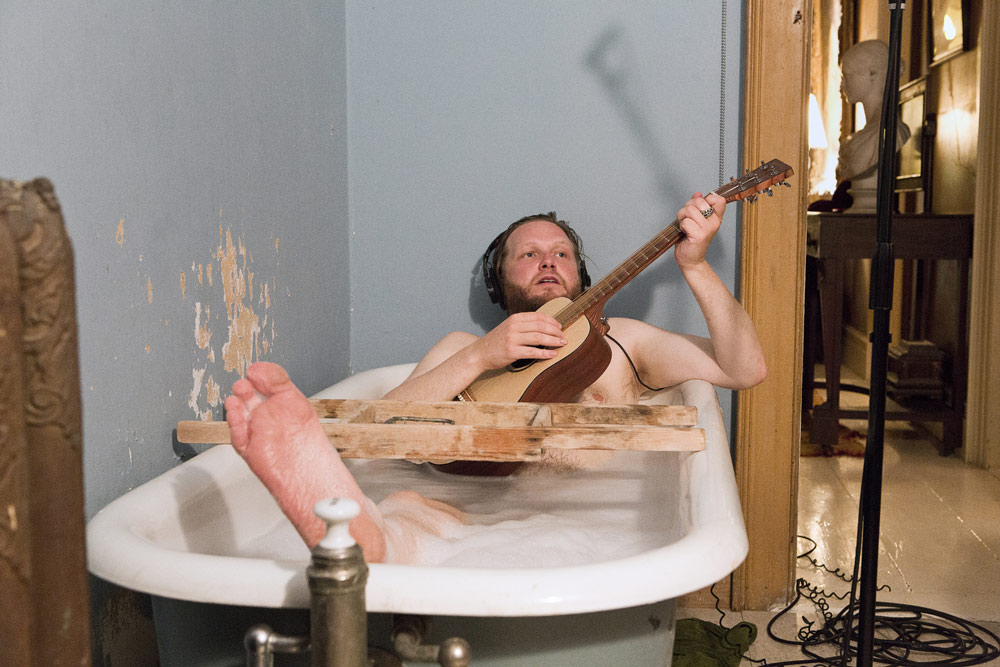 Ragnar Kjartansson and a few of his musician pals convened at a 19th-century mansion in upstate New York to perform the same plaintive song in separate rooms, and finally altogether. The result is the nine-channel video installation The Visitors (2012).

Internationally acclaimed Icelandic artist Ragnar Kjartansson describes himself in many ways, according to a recent interview with The Talks: namely, as a trained housewife and a bona fide dreamer. As he explained to the publication, “art becomes an instrument to fulfill [your] daydreams. It’s almost like a superhero pill: you can do everything through art.”

To bring his flights of fancy to life, Kjartansson has proven to be quite fond of exaggerated repetition and endurance motifs, which convey the full breadth of his creative ruminations—the tragic and the humorous, the shameful and the glorious, the sublime and the mundane. Whether he’s strumming away on his guitar naked in a bathtub, roping his artist-parents into taking part in his outlandish projects, or producing one painting per day over a six-month stretch during the 2009 Venice Biennale, Kjartansson’s performance-based oeuvre is driven by a refreshing commitment to whoop it up, make himself vulnerable, and never take himself all too seriously.

In Kjartansson’s alternately tongue-in-cheek and genuinely affecting, cardboard-mounted universe, there are no such things as beginnings or endings—only visceral glimpses into the human experience, exposed in all its imperfect glory, and recreated with utmost commitment.

This past week in Montreal, the man described by Vogue as “the toast of the art world” had a North American premiere of his performance The Explosive Sonics of Divinity. This debut accompanied Kjartansson’s first major Canadian museum exhibition at the Musée d’art contemporain (MACM), which delves into a multidisciplinary practice that gleefully blurs the lines between film, theatre, music, visual arts and performance.

At the heart of the Musée’s relatively small survey of the artist lies the resounding influence of one particular work: Icelandic author and Nobel laureate Halldór Laxness’s magnum opus, the four-volume-strong World Light (1937–1940). This romantic tale of an impoverished poet’s insatiable and downright doomed quest for beauty has been described by Kjartansson as the single greatest influence on his work as well as a bible of sorts for contemporary Icelandic artists.

World Light – The Life and Death of an Artist (2015), one of the exhibition’s three immersive video installations, draws gallery-goers in with its four-screen, lo-fi reenactment of the Laxness novel. A cacophony of overlapping sounds and disjointed story fragments greets visitors in this dedicated museum space, the gallery being transformed into a shoestring-budgeted movie set. Here, Kjartansson and friends act out the book’s core narrative while also imagining a chaotic, behind-the-scenes shoot—tedious rehearsals, set designs in the making, and multiple unedited takes of the same sequence. The ambitious undertaking of adapting a purportedly “unfilmable” book—which unfolds over countless hours and was shot over a month in Vienna—shrewdly mirrors the unattainable desires of Laxness’s flawed protagonist.

Somewhat unexpectedly, given that drawn-out executions seems to be the norm among the three immersive Kjartansson video installations on display at the MACM, I would have gladly taken more of the gone-in-a-heartbeat The Explosive Sonics of Divinity, a 50-minute theatrical “opera” presented last Thursday at Théâtre Maisonneuve.

Explosive Sonics also takes Laxness’s massive opus as its starting point. The performance features no human presence onstage—no actors, neither dialogue, nor any kind of sophisticated projections, merely a few enormous canvases of Icelandic landscapes that serve as vacant backdrops, painted by Kjartansson and his Reykjavik friends. Explosive Sonics eschews traditional theatrical standards by relying solely on former Sigur Rós keyboardist Kjartan Sveinsson’s emotional compositions (which are also based on Laxness’s novel) to move the non-narrative along.

Truth be told, some were still waiting for the titular “explosions” to occur upon exiting the venue. For my part, the majestic, German Romanticism–indebted sceneries provided their fair share of hallowed fireworks, which I found myself mulling over the following day.

A solemn mood took over the capacity crowd during the entire performance, which could be described as a lyrical homage to classic stage design, with its four Caspar David Friedrich–inspired tableaux of Icelandic mountains, forests and caves that come alive by way of a nocturnal snowfall, undulating waves, a crackling fire and so on. Sveinsson’s celestial chords were given a standout melancholy spin by the Orchestre Métropolitain’s 39 musicians. The lyrics, sung in German by 16 choristers, included the quote “beauty shall reign alone,” also lifted from World Light.

Kjartansson, who has worked as a stage technician himself, pays tribute to the inner workings and behind-the-scenes machinations of the theatre each time the curtain is lowered, as the suddenly pitch-black and dead-silent room is overtaken by the sounds of canvases being switched up and props being shuttled around the stage.

Described by Kjartansson as an “opera without divas,” Explosive Sonics is also imbued with its share of wistful moments, taking us back to an analog, pre-technological time when deploying DIY means in the name of art was all patrons asked for in conjuring up a world so unobtrusively beautiful.

Laxness’s World Light walks the same fine line between sincerity and irony that epitomizes much of Kjartansson’s delightfully ambiguous practice. The book served as a subversive critique of romantic artists, but there’s also a certain amount of sorrow and nihilism in Explosive Sonics, a production teeming with natural beauty but devoid of any conspicuous human presence.

Considering his motivations to devise an abstract, actor-less meditation on beauty bound for Berlin, might Kjartansson be suggesting that the sacred can only be appreciated when humans are markedly absent? That beauty must truly “reign alone”? Kjartansson lets the question linger in our minds long after his hefty bunch of collaborators have taken a bow and retired from the stage.

An equally significant question echoed throughout Kjartansson’s MACM showcase has us pondering whether an artist’s quest for fleeting moments of beauty can ultimately affect change. Can an artist make any significant contribution to humankind? Or, like Laxness’s hapless young poet, is one’s quest for artistic epiphany invariably doomed to fail?

As open-ended and unsettled as the queries prompted by Kjartansson’s art may be, my takeaway is that his salvation lies in music. It’s undeniably a key component in every project the artist takes on, including the MACM installation A Lot of Sorrow (2013), wherein indie rockers the National devotedly perform their heartrending ballad “Sorrow” for six hours straight.

As for whether the creative spirit can aspire to triumph in the midst of the most strenuous of circumstances, I found my answer upon stepping into the MACM’s centrepiece: the superb nine-channel video installation The Visitors (2012), for which Kjartansson and a few of his musician pals convened at a 19th-century mansion in upstate New York to perform the same plaintive song (Feminine Ways) in separate rooms, and finally altogether.

There’s something unforgettably beautiful about witnessing a group of cellists, drummers, accordionists, pianists and guitarists all come together to sing the sensitive lyrics of Kjartansson’s former partner (“Once again I fall into my feminine ways”) in The Visitors. As the viewer moves around the immersive space to take in the hypnotic, single-take, 64-minute performance unfolding simultaneously across nine different screens, one’s heart is warmed by this group’s genuine commitment to sharing in this divine moment. It’s a powerful celebration of friendship and an eloquent attestation of personal art bringing people together.

So while the whimsical and enigmatic Kjartansson may have us wonder whether true beauty is within an artist’s—or anyone’s—reach, the collaboration-inclined Icelander doesn’t skimp on his superhero pills, as he continues to pair up his musical pursuits with moments of tragicomic fiction, and the dramatic everyday with ephemeral reveries.

Whether these amount to “the explosive sonics of divinity,” only Kjartansson himself can answer.

Michael-Oliver Harding covers culture for Dazed, i-D, VICE/Noisey, Slate, Nylon and ELLE Canada. Based in Montreal, he is also a jury member for the Polaris Prize.