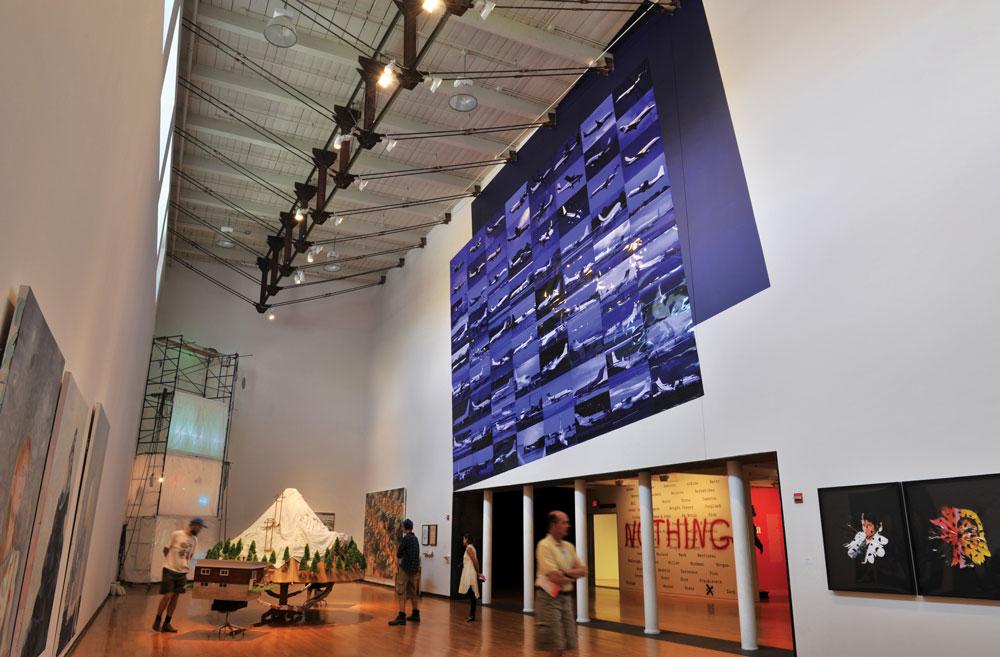 Opening spread from "Up North and to the Left" by Sarah Milroy, from the Fall 2012 issue of Canadian Art.

What do Americans think about when they think about Canada? This is the question that arises, inevitably, while touring the exhibition “Oh, Canada,” organized by the American curator Denise Markonish for MASS MoCA, a sprawling historic brick factory turned contemporary art museum in the northern Berkshires. You think about this when you meet the giant, rose-encrusted grizzly bear at the threshold to the show (by Janice Wright Cheney), or the geodesic igloo made of cast human femurs (David R. Harper), or the faux beaver dam (Bill Burns). In Markonish’s exhibition, you encounter no shortage of clichés of the Great White North. You worry over it, too, when you consider the naive (though charming) tone of much of the work on display, and the curator’s professed observation that Canadian artists are disproportionately concerned with craft. (All that folksy handiwork from the nation that brought you Marshall McLuhan, Jane Jacobs, Glenn Gould and the Canadarm.)

Long before the show opened this May, the drums had been beating north of the border. Where were the names for which our country has been known internationally: the brainy Jeff Wall, Ken Lum, Rodney Graham, Ian Wallace and the rest of the Vancouver gang? (Rumours circulated about a snobby West Coast shut out, with artists allegedly demurring when faced with the idea of a show based on national identity—an admittedly suspect pretext for an exhibition in this digitally global day and age.) And what about Central Canadian artists of note, from Ian Carr-Harris and Vera Frenkel to Geneviève Cadieux and Jana Sterbak? Photography is scarce in “Oh, Canada,” as is strongly concept-driven media art, as is intellectual hauteur in general. This is not a view of Canada that we—as southward-thronging northerners—are accustomed to.

But throng we did. Some 600 Canadians descended on the sleepy New England town for the show’s opening weekend, where we danced to the drumming of the Calgary artist Rita McKeough, tapped our toes to the Cedar Tavern Singers from Lethbridge, Alberta (who sang to us about “neo-lumberjack abstraction” and “relational lacrosse”), ate fresh-baked, custom-designed North Adams sourdough (made from locally harvested wild-yeast spores) from Eryn Foster’s community bread oven, and rode the pony-powered merry-go-round created from traffic barricades by the Quebec City collective BGL, a resonant reminder of Quebec’s season of civil disobedience. Preconceived snits and curatorial skepticism evaporated in the summer heat. Here, in this rather unlikely corner of the world, we found the largest exhibition of contemporary Canadian art ever mounted inside or outside of our home and native land. (The show remains on view for a year, and will attract an estimated 15,000 visitors.) Setting skepticism aside, I started trying to make sense of it all.

The talk among visitors on the opening weekend had a kind of binary consistency: on one hand, attendees found the installation a schmozzle (it’s true—work is jammed in willy-nilly), but, on the other, they found it energetic and full of fresh news, from Kim Morgan’s latex skin of a decommissioned PEI lighthouse, suspended dramatically from the rafters, to the hide-clad faux-ceramic boar by the Chicago-based David R. Harper—the findings the result of Markonish’s roughly 400 coast-to-coast studio visits over an epic three and a half years of research. Manitoba, Saskatchewan and Alberta, provinces that consistently fail to get a fair shake in our national discussion about art, come on strong, and this is refreshing. I felt a general sense of relief, too, about experiencing a view of Canadian art not dominated entirely by Vancouver.

Instead, the vibe is handmade, grunge-alternative and endearing—a kind of “Hansel and Gretel”-meets-Occupy mashup. Fantasy is big, as is comic subversion, and frolicking in nature. (Noam Gonick and Luis Jacob’s 2007 geodesic utopia Wildflowers of Manitoba makes another star appearance here, featuring a bare-assed gay wedding in the long grasses and endless twilight of midsummer.) Bill Burns presents a series of watercolours on themes of nature and culture (in some, globe-trotting curators and critics are imagined adrift in the Canadian hinterland), as well as a log-pile homage to the giants of contemporary art, with seemingly chewed-upon logs bearing the names of famous international artists, curators and critics. A white van by Kim Adams is rendered lacy with laser-cut holes of various diameters, and illuminated from within by blinding white light—a magic bus for mind expansion on the open road. Canada is positioned as a zone of escape, a metaphorical Narnia at the back of America’s psychic closet.

Some of Markonish’s selections express solidarity with Canada’s traditionally critical take on American values and foreign policy. Garry Neill Kennedy’s photomural of the CIA Extraordinary Rendition aircraft (sometimes used for transporting suspected terrorists), for example, is installed high on a wall in one of the largest galleries, a rare stringent note, and a reminder of the Canadian view of our menacing Big Brother. McKeough’s video-document Alternator (2008) records the artist drilling for oil in a paved parking lot, an absurd send-up of the notoriously inefficient tar sands extraction project in northern Alberta, which provides oil to the US and China. (McKeough staged a live performance of the work during opening weekend.) Taking it all in, I couldn’t help but sense the role that Canada plays in the imagination of left-leaning Americans, who think of our country as a Shangri-La of nonviolence, environmental activism, sexual tolerance, universal healthcare and socialist politics.

At the heart of the show, though, is the comic impulse, at times articulated with historical pedigrees appended, as is the case with Marcel Dzama’s gorgeous black-and-white short video A Game of Chess (2011), in which a conflict on the chessboard morphs into a Dadaist ballet worthy of the Cabaret Voltaire. As Markonish notes in her catalogue essay, silliness is one of Canada’s leading cultural exports, from Jim Carrey and Martin Short to Mike Myers and Catherine O’Hara. Is it our British heritage (or, in the case of Dzama, our continental heritage), or our underdog relationship with Uncle Sam that drives this? Cloaked in humour, the underdog can prevail.

Carnivalesque dioramas abound—from Graeme Patterson’s circus of trampolining bison and mountain lions to Daniel Barrow’s weirdly lurid seaside fantasy (with overhead projector) to the work of Saskatonian Amalie Atkins, who presents a miniature felt circus tent that serves as a folksy screening space for a video of a young woman who traverses a wintry landscape with a giant birthday cake in her arms. (Adversity presents challenges, and Atkins’s dauntless protagonist summons the pioneering hobo spirit.) Humorous, too, are the black-comic grotesqueries of Shary Boyle (one drawing of a leg and foot emerging from a vaginal slit stands out in my memory), Luanne Martineau’s labial and organ-meaty felt hangings, and Valérie Blass’s surrealist conflation of a female lower body and high-piled luxuriant tresses, which exudes a curious tone of menace. Hilariously, at times disturbingly, sensuality is pushed to excess.

Comedy, too, underpins the work of many Aboriginal artists here. Kent Monkman’s camp send-up of the amorous entanglements of Tonto and the Lone Ranger (and others) in a prefab log cabin set against an Albert Bierstadt–esque sublime digital landscape is a kitsch focal point of the exhibition, teasing at the conventions of masculinity, Indian-ness and the love that dare not speak its name. From Saskatchewan, Ruth Cuthand presents beadwork images of viruses, alluding with dark and sparkling irony to the catastrophic importation of European disease to the “New World.”

The darkest pun, though, is Rebecca Belmore’s. An Anishinabe artist, she uses the MASS MoCA platform to comment on the confrontation between First Nations activists in BC and Alberta and the international oil and gas companies now making their bids for expanded resource extraction on Canadian soil. Belmore places an oil barrel on its side, stretching a white screen over one end to create a kind of drum. Onto it, she projects the head and shoulders of an eagle, which eyes us with twitchy alertness. Is this the eagle of American corporate imperialism, or an icon of free-flying Aboriginal pride, poised to defend its territories from interlopers? Belmore pulls the punch line, leaving us to struggle in the silence.

Thinking about the comic theme, I found myself considering works by other senior Canadian artists that belonged here: Liz Magor’s silicon-rubber sculptures about hoarding and hiding off the grid, Rodney Graham’s photographic forays into multiple identity (his costumed self-portrait Lighthouse Keeper with Lighthouse Model, 1955, from 2010, would have been ideal), Tom Dean’s cast-bronze bestiaries and hobo soup-kitchen performances, perhaps even Lynne Cohen’s deadpan office interiors, with their wry critique of corporatization. Brian Jungen could have added an important note, given the sharp wit of his sculptural language, and his ability to render cultural and political critique in three dimensions.

Then there are the ghosts of comics past: Greg Curnoe’s wisecracking maps of North America with the US missing, Joyce Wieland’s Arctic wildflower quilt and quirky cinematic experiments, N.E. Thing Co.’s mock-scientific photo-documentation of “aesthetically claimed things,” the frolicsome poodle heraldry of General Idea—much of which is alluded to in Markonish’s exhibition catalogue. Her statement that she wanted to focus on emerging rather than known talents seems perverse, when near history is—for American viewers and even for Canadian ones—so uncharted. An unremarkable concurrent show of art influenced by architecture swallows up an adjacent chunk of space in the MASS MoCA exhibition complex, where additional space for “Oh, Canada” could have been crucial. It is frustrating to think of how much more definitive and revelatory this exhibition could have been.

Still, on its own terms, “Oh, Canada” is a success, and a success, moreover, where Canadian museums have failed. One of the things I heard said a lot on opening weekend was: “Why is this happening in Massachusetts and not in Toronto, Montreal, Winnipeg or Vancouver?” But could we have risen above our regional factionalism to come together in this new way? I suspect not.

“Oh, Canada” offers a view from the outside, and I found looking at it surprisingly uncomfortable. The experience gave me sudden insight into how Aboriginal people might feel when encountering the enthusiasm of white anthropologists for their world: on one hand, pleased that their culture is at last being honoured; on the other, wary of the motivations and preconceptions of the visitor. But Markonish’s efforts have revealed some themes we have missed, given us some things to wrestle with, and brought to light a bunch of new talent. She’s shaken things up. This feels like a good thing.