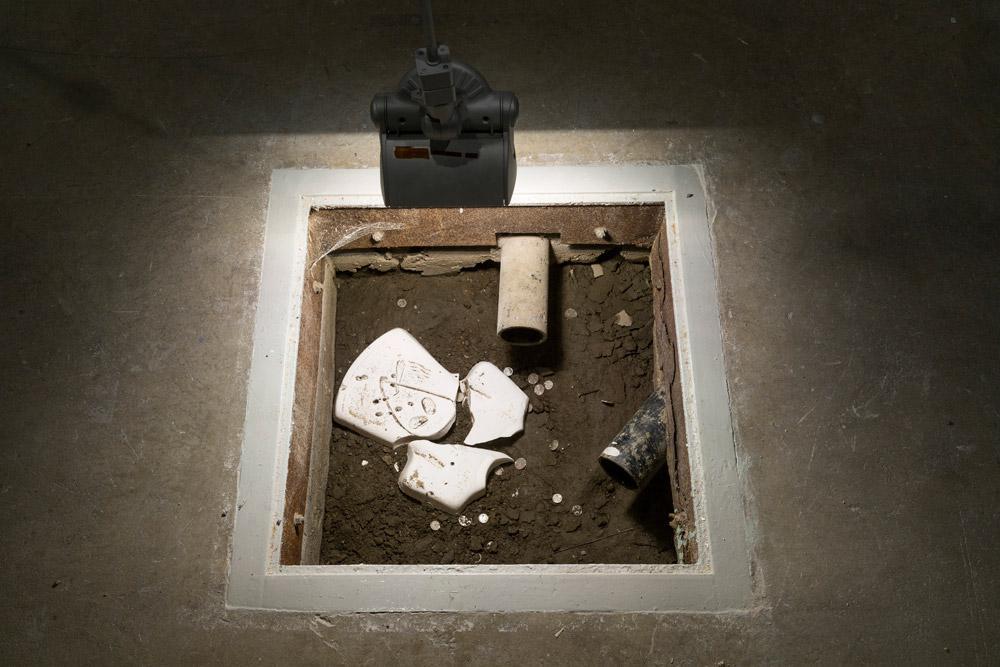 With its crumbling walls and dim lighting, Parisian Laundry’s bunker feels a bit like an archaeological site. Hidden away underground, the space itself is in dialogue with Montreal-based collective MAW’s latest exhibition, “Deflective Skepticism & Critical Plinking.” The freestanding and relief sculptures displayed are a play on the idea of the ruin, sometimes monumental or fragmented. However, the show is not simply a hymn to the past, but at once consolidates and defers meaning as effected via its objects.

Most of the pieces exhibited in “Deflective Skepticism & Critical Plinking” are blanketed in a layer of white (either plaster or drywall compound). This relegation to a single aesthetic field is less aesthetic than ideological, though. According to the exhibition description on the gallery’s website, the “process-based sculptures assume that the end is inevitable and that homogeneity is the means to said inevitability.” Homogeneity is thus employed by MAW not in the service of beauty or harmony, but as universal and certain: the great leveler, death.

With this in mind, the exhibition’s great monument, the towering zigzagged Charlie Brown Crystal, functions as a memento mori. Not only do monuments serve as sites of history’s triumphs, but they are also solemn reminders that the end is imminent. The members of MAW apparently shot these sculptures with pellet guns shortly after they were created. Violence is therefore associated with passion, the latter a characteristic motivation behind art making.

Significant too is a compression of time, as production and destruction are made simultaneous. The three Early Minglings relief sculptures are exemplary, made of carved-out plaster and using the visual language of the decaying, forgotten ruin. A plaster sculpture resembling a double-headed, fragmented antique obelisk on a wheeled platform, titled U Kno That It’s Tru, is similar to Early Minglings in its composition. These artworks confuse a linear narrative of production and destruction where the former precedes the latter. Rather, destruction is posited as a corollary of production, already implicit within any act of creation.

Humor plays an important role in the execution of the exhibition, setting off the more nihilistic tones with moments of productivity. Suspended from the ceiling of the bunker is a giant fried-chicken-drumstick sculpture, titled Release Me. The void of a bite reveals a fleshy interior. The title suggests a relation to the prevalent theme of death present within the space. A ludicrous surrogate for the cadaver, the piece of meat awaits exoneration following death by hanging.

Release Me is the most obviously visible comedic element, although such elements are interwoven within all the pieces throughout the gallery. A broken up cast of a T-shirt which depicts an alien smoking a joint sits by the drumstick in a small, wet hole. Also, a ridiculous cartoon dog is carved into plaster in the relief sculpture I Heart Deece. With an open mouth, the character speaks the nonsensical words of the title. Donkey, a donkey produced of found objects, is a playful take on death; a variety of pieces doomed for the trash can forms the animal.

Perhaps, though, humour plays a more fundamental role within “Deflective Skepticism & Critical Plinking” than a mere contrast to death. The title of the show may offer a clue, appropriating terminology from the academic discipline of critical theory. The exhibition at once deflects authority from academic institutions as well as attacks (plinking is a term used for shooting unconventional targets). Intertwined, both death and humour play central roles in deferring and critiquing the exclusive history of academic practice and the legitimacy of its narratives.