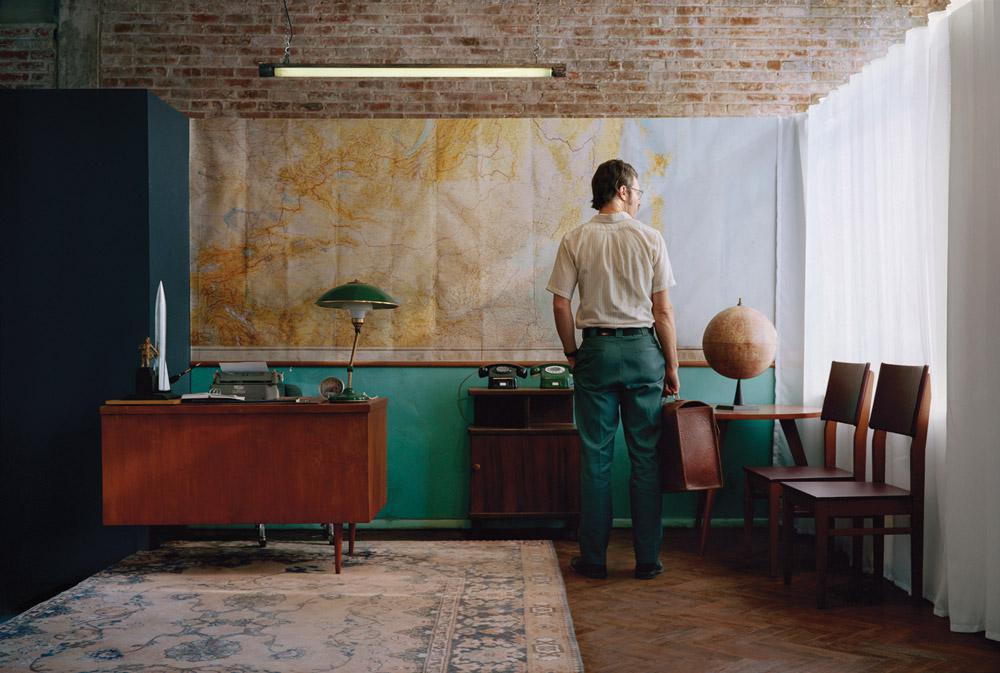 The exhibition “whiteonwhite” explored the results of an expedition through Russia and Central Asia by Eve Sussman and her collaborative group Rufus Corporation to assemble material for a series of interrelated works about the human desire to transcend time and space.

The installation Yuri’s Office (2009) is a meticulous reconstruction of the workspace of Yuri Gagarin, the first human to orbit Earth. The work is based on a photograph that Sussman took of the cosmonaut’s office in Star City, Russia. Although the room is modest, everything in it is kept exactly as it was on the day of Gagarin’s death in a training-jet crash in 1968. A creased wall map, a globe of Mars and a model of a sleek spacecraft that rests on a utilitarian midcentury desk all point to the era’s interest in the seemingly endless potential of space travel.

The installation is used as a set for the presentation of the film that is the exhibition’s centrepiece. Whiteonwhite:algorithmicnoir (2009–11) refers to Kazimir Malevich’s austere painting Suprematist Composition: White on White (1918). Whereas the space race focused on national supremacy in cosmic exploration, Malevich pushed the limits of the possibility of abstraction. In Sussman’s film, we enter a darkened space set up like a movie theatre. On both sides of the room, monitors display cryptic computer-code markings and keywords that can be read as parallel text narratives to the film. Approximately 3,000 clips, 80 voice-overs and 150 musical compositions are tagged with words. “Telephone” and “sky,” for example, appear simultaneously with a telephone being answered and a long shot of a night sky. The film is live-edited by an algorithm, which serves as a contemporary equivalent to the Surrealist cut-up technique; it sequences the segments in real-time, ensuring that the work never plays the same way twice. Although images, dialogues and characters reoccur to convey a sense of continuity, particular narratives only develop as each viewer pieces them together.

A man wearing a beige trench coat wanders through the desolate landscape of City-A, a mysterious place filled with what seems to be the ruins of failed utopias. The film’s protagonist is Mr. Holz, a geophysicist who works for the New Method Oil Well Cementing Company. Holz notices discrepancies in local timekeeping: clocks do not run 60 seconds to the minute. A satellite dish looms over deserted snow-covered plains. The drinking water is spiked with lithium to render the population docile. “He only spoke when absolutely necessary,” a voice-over recording announces. Language rationing is in effect. Each person has a finite lifetime’s supply of words.

There is no looping that might orient us to an evolving narrative. There is no end to signal when to leave the theatre. Time extends indefinitely. In moments of serendipity, poetic juxtapositions emerge unexpectedly from the shuffling of images, voices and sounds. We are in the presence of the immediacy and chaotic order of lived experience.

This is a review from the Winter 2014 issue of Canadian Art. To read more from this issue, visit its table of contents. To read the entire issue, pick up a copy on newsstands, the App Store or Zinio until March 14.