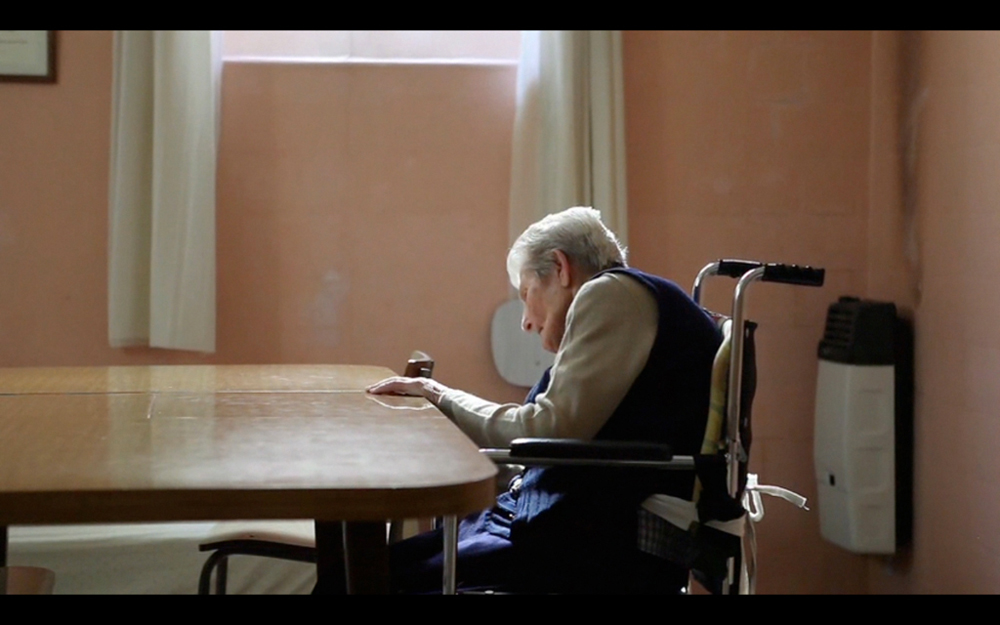 St. Teresa of Avila, the 16th-century Carmelite mystic, wrote: “Let nothing disturb thee; Let nothing dismay thee; All things pass; God never changes. Patience attains all that it strives for.” Her words characterize values central to monasticism—patience, acceptance, meekness and faith—and they portray a vocation both resilient and brave, though it might reside in the margins.

For 10 years, multi-disciplinary artist Dominique Rey has documented an order of Catholic nuns that’s facing the very real threat of extinction. Les Filles de la Croix was founded in early 19th-century France and spread through five continents, but today, because of its members’ advancing age and a dearth of fresh blood, the future of the organization hangs precariously.

Rey’s interest in the order began with her two aunts, who were sisters at the convent formerly located at 66 Moore Avenue in her hometown of Winnipeg. (The St. Vital congregation has since moved in with the Oblate Sisters at St. Boniface, which incidentally shares a portion of its suites with a retirement facility). In pursuit of the disappearing sisterhood, Rey has embedded herself within Les Filles de la Croix, visiting their historic motherhouse in La Puye, France, as well as houses in Argentina and Brazil.

Her latest instalment, “Under The Rose Arch,” on view at the MacLaren Art Centre in Barrie, presents five photographs, three photo assemblages and a video—some previously shown, some never-before-seen—pulling the voluminous project into a tight essay: more than mere elegy, “Under The Rose Arch” is a veneration.

All of the works displayed are lens-based. Photographs have been the building blocks of much of the project. Images like Infirmary Kitchen, which captures an unpeopled cookery, and Small Chapel—a tiny, austere prayer room—function like Lynne Cohen’s empty spaces: we’re compelled to envision the ghosts that might inhabit them. In Sr Carmen and Sr Neuza we glimpse snatches of life: a sister on administrative duty, another caught candidly. Together, the photos forward the premise that this way of life is endangered, and thus more difficult to find. We can mostly only view its residue.

The scenes share in the visual lexicon of the civic centre and the nursing home: houseplants, stackable chairs, banquet tables. As those emblems suggest, they’re each spaces concerned with care and duty and community. The photo assemblages, derived from smaller collages on paper, then realized in human size as C-prints mounted on sculptural forms laser cut from Plexiglas, transform those quotidian objects into totems. One assemblage, hanging on the wall in a vaguely cruciform arrangement, is cobbled from images of the nuns’ greenhouse—its sawhorse worktable, and the housing and electrical cables of its fluorescent lamps. Another roughly takes the shape of a flag, cut from an image of chair legs. Is it significant that the flag only pictures the shadows of legs? Perhaps it’s the ensign of a nation nearly vanished, one founded on congregation, service and a truly communal sense of well-being—a creed that feels undervalued in contemporary life.

In the side room, the video Les Filles de la Croix introduces the sisters themselves, following a group about their duties. It is a picture of devotion, but also of solitude and slowness and tremendous love for one another. The camera pulls in tight on their faces; wordlessly, each smiles. Some tear up—not due to fear or regret, but, seemingly, joy. Theirs is a noble, beautiful way to have lived; there isn’t a modern analogue for this kind of sisterhood. At once, the parochial seems downright counter-cultural.

The titular photograph, Under the Rose Arch, hangs on the back wall. It’s likely one of the first images you’ll see, but it’s worth circling back on. Seventeen nuns, all grey-haired, have been assembled in two rows for a group portrait under a vault of pink climbing roses in some grand courtyard. Yes, it captures the community in its twilight —pictured together for the last time, you might imagine—but like the photograph of a graduating class or a significant conference all sat together, Under the Rose Arch is a memento of the group’s achievement. Their resolve is beatific: threatened by obsolescence, bravely, they continue about their duties. Their pose is steely, like that of St. Teresa: all things do pass, but patience will attain what it strives for.