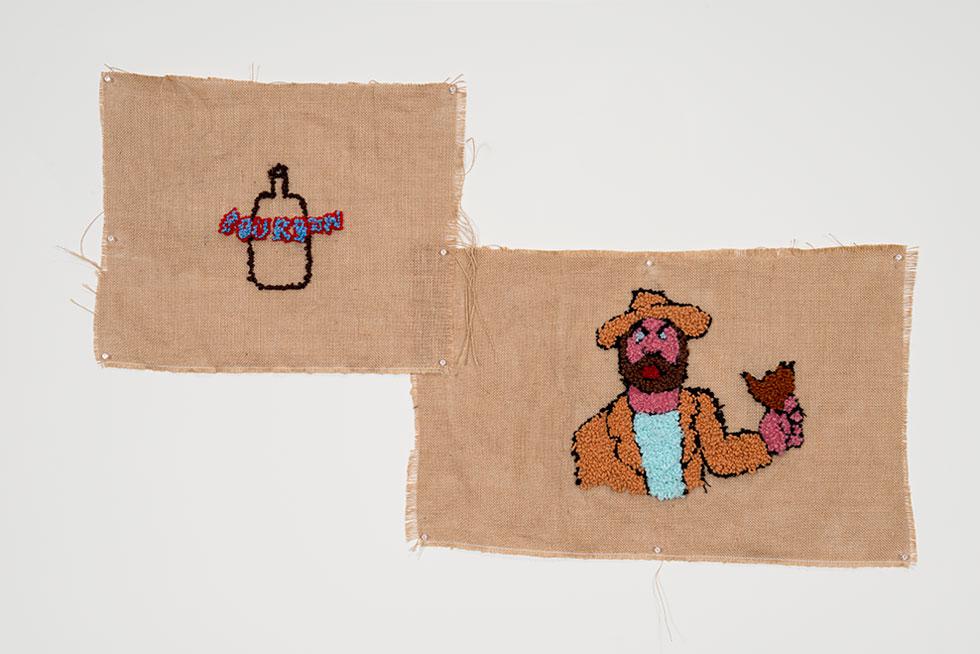 Newfoundland artist, writer and critic Craig Francis Power’s darkly comedic output is often outspoken, irreverent and steeped in East Coast vernacular form. Playing (if not living) the role of an archetypal bad boy with a heart of gold, Power has repeatedly cursed, griped and dug in his heels in a contrarian manner through his work.

In Power’s current exhibition “Les Fleurs du Mal” at the Art Gallery of Nova Scotia, he continues to make a scene while thumbing his nose at “high art” from within the institutional system. Like a more crass, though less sexual, comic-book version of the 1857 Charles Baudelaire poetry volume from which he takes his title—a book that was deemed an insult to public decency and was subsequently censored—Power spews forth tales of the baseness, lurid indulgence and demons lurking in daily life.

The exhibition is primarily composed of a series of hooked rugs, a traditional East-Coast folk art form that, in this context, seems in direct dialogue with the expansive AGNS folk-art collection. Like the traditional hooked rugs in the second-floor folk-art gallery, the works act as storyboards, taking their subjects from daily life and incorporating autobiographical elements.

However, whereas traditional hooked rugs generally focus on domesticity, farming and fishing, Power repeatedly depicts scenes involving violence, alcohol and bodily excretions of all kinds: vomit, blood, urine and feces. His boyish mix of mischief and base humour has a strange compatibility with the “outsider” art form of rug hooking.

Power’s use of no-nonsense, tell-it-like-it-is titles is key to the humour of these works; we are presented with his debased vignettes and it is left to the institutional voice of the caption to inform us we are looking at Puke/Blood (2012), The Angry Country Singer (2010) or The Most Fucked Up Horse in the World (2012). The captioning seems to both confirm that the work is, in fact, “art” while simultaneously being unapologetic for its rough-hewn bravado. Power’s piece Puking Cat (2010) is just what it sounds like—a hastily rendered head of a black cat with green yarn spewing forth from its mouth down to a messy pile on the gallery floor. The more elaborately rendered God shits on my head (2010) works in a similar way; we see a figure (one assumes this to be Power) standing against a body of water, and in the blue sky above we see an ethereal posterior excreting in his direction.

Within these works, crude figuration accompanies crude subject matter. They are left raw and seem unfinished; they have not been ironed, and marks from the stretching hoop are still visible, while the roughly cut burlap edges unravel. Presented in clusters with individual works often overlapping, the hooked rugs lead viewers to extract fractured and highly subjective narratives focusing on familiar experiences with the abject, latent or otherwise.

Though Power has said he took up rug hooking as an alternative to smoking cigarettes—a stop-smoking method he found to be ultimately unsuccessful—it is certainly more than just a coping technique.

Beyond the baseness at play in the works, and their juvenile “gross-out” effect, Power exposes our expectation to find an inherent crudeness in all folk art. The crudeness in question is often verbally cloaked as “purity” or “naïveté,” but it evinces a problematic dialectic between urban and rural cultures. In exploring these ideas, Power works to undermine our assumptions, flippantly embarking on a paradoxical, and indeed impossible, withdrawal from “high art” staged within the confines of the institution.

It is Power’s pantomime withdrawal that connects the series of hooked rugs with the video piece in the show—Fuck You, Rooms (2010), a short work located at the far end of the gallery space. Also bearing a notably literal title, Fuck You, Rooms is a lo-fi, single-shot cuss-out in which Power appears as an everyman character berating and taunting the Rooms, Newfoundland’s provincial art gallery, museum and archive. The shaky camera work abruptly pans between an inebriated-seeming Power, who is standing in the museum’s parking lot, and the austere institution—a sequence that implies a sense of call-and-response to the one-sided conversation. Power, as a performer, wholly embraces his Newfoundland accent and vernacular turns of phrase from the region.

Within this video, the Rooms seems to stand in for any authority figure, be it government, business or otherwise—a leviathan that the commoner, as enacted by Power, has no rational hope of defeating. Indeed, for all his cursing at the powers that be, he may as well be braying at the moon. The tirade escalates to the point of Power challenging the building to a physical fight, repeatedly jeering “C’mon boy, I’m right here” in a desperate attempt to assert some kind of dominance over his looming adversary.

Through this piece, Power enacts a complex relationship with the museum. He comes across as a rebellious teen—antagonistic and defiant, but ultimately seeking approval from the power structure he defies. Like his hooked rugs, the video takes issue with some of the trappings of the institutional art system and stages a mock withdrawal into a hermetic, DIY vernacular.