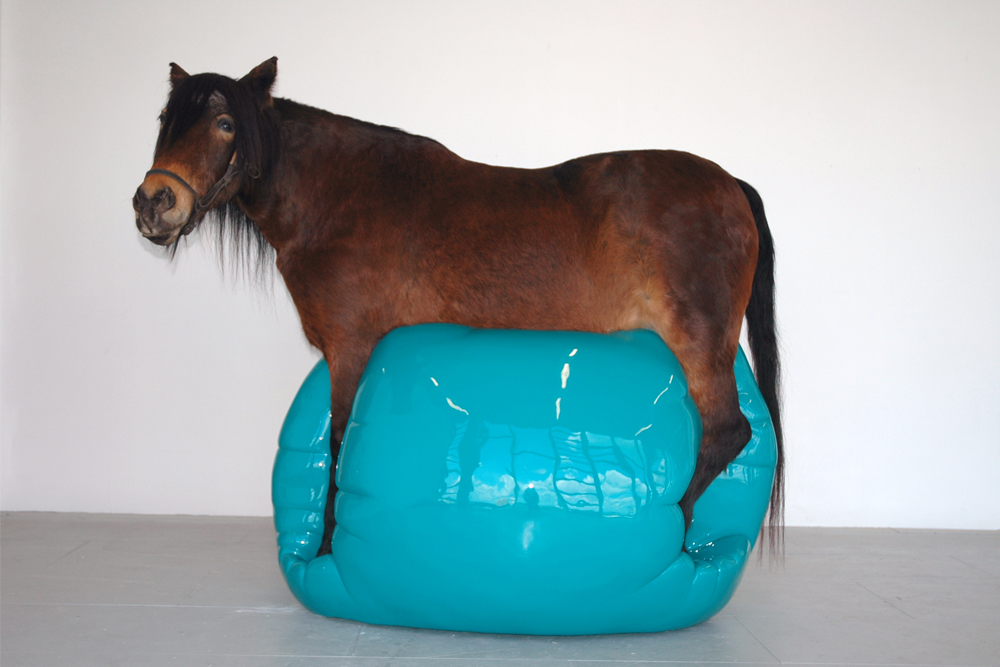 “Champagne Life” is the first all-female exhibition ever held at London’s Saatchi Gallery, and is staged to celebrate its 30th birthday. The exhibition showcases 14 “emerging” artists, aged 25 to 59, from across the world: they have little in common besides their gender, and that they work mainly in painting or sculpture. While the Guerrilla Girls’ famous poster asking if women have to be naked to get into New York’s Metropolitan Museum of Art has been printed onto a mug and put on sale in the shop, there is little discussion of gender-based oppression or institutional exclusion, and it’s hard to avoid a sense of tokenism.

The title comes from one of Brooklyn-based artist Julia Wachtel’s works, on display in the first of “Champagne Life”’s nine rooms. It’s meant to be ironic: the catalogue says that the show “throws into contrast the reality of many long, cold, lonely hours in the studio with the perceived glamour of the art world.” This irony doesn’t come through in the piece, where three copies of an upside-down image of Kim Kardashian and Kanye West are juxtaposed with a blue plastic model of Minnie Mouse, offering no new commentary on celebrity culture or its intersections with artistic circles. It does, though, tie in conveniently with French champagne house Pommery’s sponsorship of the exhibition.

There are plenty of highlights, with the most interesting pieces in galleries three and four. Canadian artist Mia Feuer’s Jerusalem Donkey is a papier-mâché sculpture, in various shades of blue, made after Feuer completed some workshops with Palestinian children. It references the fact that as roadblocks prevent Palestinians from driving motor vehicles, locals get past them on animals. Feuer’s “homage” to these creatures has its hind legs tied together, an emblem of the power dynamic between the people and the occupying forces that is not subtle, but rather striking.

In the same room, Maha Malluh, who works in Saudi Arabia, presents her Food for Thought series of 233 burnt pots mounted on a wall. Malluh notes that these objects, traditionally used throughout the Arab world, have always travelled across countries and cultures, and the sheer volume allows the viewer to attach an infinite number of stories and meanings, generating more possibilities than Feuer’s donkey. Soheila Sokhanvari’s Moje Sabz, where a taxidermy horse is mounted upon a turquoise Jesmonite blob, completes a Middle Eastern triptych of sorts, a comment on the 2009 protests against Mahmoud Ahmadinejad’s landslide re-election in Iran, widely thought to be fraudulent. It’s less open than Malluh’s work but more oblique, and the three pieces complement each other neatly.

Moving on, Jelena Bulajić’s large, detailed portraits of elderly women that she has encountered in daily life catch the eye. Their photorealism recalls some of Sanja Iveković’s portraits of female resistance fighters or women working in the former Yugoslavia, but Bulajić’s subjects have all the trauma of 20th-century Balkan, and particularly Serbian, history written into the lines of their faces. They surround Virgile Ittah’s sculpture Echoué au seuil de la raison, with two figures, readable as women but only just, draped across cast-iron beds. Ittah’s use of wax gives their bodies a look so distressed that they may be Holocaust victims, or the “hysterics” of the Salpêtrière hospital in fin-de-siècle Paris, their aesthetic resembling that of Jenny Saville’s paintings of nude women that Charles Saatchi promoted in the mid-1990s.

The best of the remaining sculptures is Two Cows by Stephanie Quayle; these are made of steel, chicken wire and red-brown clay. This material links the animals to the earth, and they gaze lovingly at the viewer: with one cow’s head resting on the other’s back, there is a kindness and camaraderie between them, some sensuousness and just a little humour. Canadian artist Julia Dault provides two Plexiglas and Formica sculptures bound with boxing wraps and string. Their manifestation of tension is bright and amusing, if quite literal; Dault keeps the scratches made on their surfaces as she bent them into shape, with the titles stating when they were made, how long they took and the names of any assistants, putting the focus less on the finished object and more on the nature of its construction. A similar approach might have benefitted Alice Anderson’s Bound and 181 Kilometres, two sculptures made from copper thread, one of a bobbin and another of a ball; these feel rather redundant in the large gallery in which they are installed, signifying little except their own impressive scale.

The remaining paintings are similarly patchy. Mequitta Ahuja’s works reference her African-American and East Indian ancestors in a way that combines the figurative and the abstract, most successfully when the women who always feature stare directly at the viewer, making a Western viewer aware of her colonialist past. Sigrid Holmwood’s images of women at work, first shown here in 2009, use fluorescent reds, oranges and yellows to literally light up those people written out of history, but while her post-Impressionist style feels appropriate, it offers little originality. Meanwhile, Suzanne McClelland’s “domestic terrorist” works, with scraps of information about people (e.g. “member of Black Panthers”) scrawled on the canvas, borrow their style from Basquiat but fail to build their narratives into anything intellectually sustained.

Ultimately, “Champagne Life” feels like less than the sum of its parts. Its slapdash curation made me wonder if one of Charles Saatchi’s motives was to curry favour after being pictured with his hands around then-wife Nigella Lawson’s neck in 2013. It doesn’t seem as if it was created by someone with any great feeling for art by women, explicitly feminist or not. Despite its individual successes, it’s incoherent and ineffective, and—sadly—a missed opportunity.