Black Mirror: Image and Reality in the Work of Antonia Hirsch 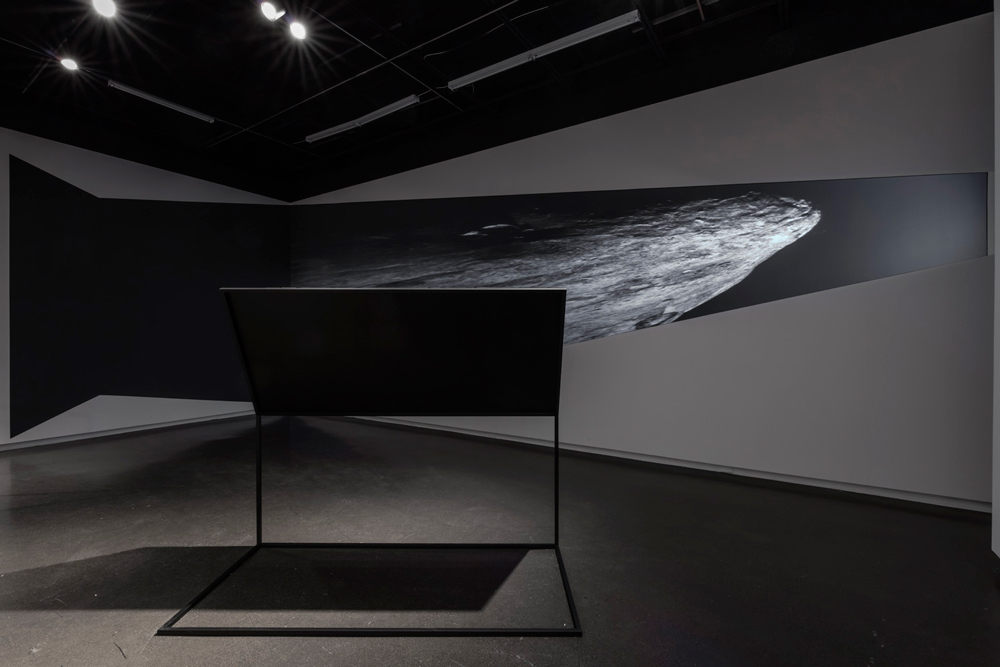 Antonia Hirsch’s current exhibition at Gallery TPW, “Negative Space,” is shrouded in mystery. Dimly lit, with references to astronomy and contemporary mobile devices, the Berlin-based artist’s installation offers a way of ordering the world through images and objects that consider the space between things. The references to smartphones and tablets are complemented by ones to the Claude glass or black mirror, a viewing device popularly used by landscape painters in the 18th and 19th centuries. Both essentially cause their users to turn their backs to the world; the gaze lost in a mediated distortion of reality.

Cosmic Nightshade (2014) reproduces original, choppy footage of an asteroid‘s rotation in a stop-motion video, projected diagonally against a black-painted shape. The asteroid’s name is 433 Eros, after the Greek god of love. When the NEAR-Shoemaker space probe arrived in its orbit on Valentine’s Day, 2000, high-resolution images revealed its shape as not unlike an elongated potato. The surface appearance of these two objects is also uncanny: the wrinkles and pockmarks of the potato resemble the many craters on the asteroid named after famous lovers in history, mythology or fiction—Don Quixote, Orpheus, and Cathy from Wuthering Heights, among others. The video’s emphasis on surface, or skin, suggests Hirsch’s interest in barriers that separate inner and outer worlds, and relate to our own embodiment in space. In addition, Hirsch suggests how we might relate to the unknown through familiar things.

Narcissus Screen (2014), a freestanding triptych—like a folded partition—alludes to another figure memorialized as a crater. It stands 293 centimeters tall, and one of its three sections contains a glass panel with an amorphous painted outline of 433 Eros, or perhaps a potato; the two other frames are empty. Needless to say, the glass allows us both to look through and to decipher the reflection of faint outlines from surrounding structures. The other two panels, though empty, seem as if they might also contain glass. It’s a confounding of the viewer’s presence with the absence of reflection: we realize there is nothing there to reflect us after all. The urge to grasp at the surface, to confirm its absence, recalls the fate of Narcissus as he reaches for the surface of the water that shows him his own beautiful reflection, stumbling and drowning—although here, of course, the outcome is much less dramatic.

On the furthest wall facing the entrance is an oval photograph depicting the asteroid. It looks like a small potato, but is in fact the asteroid. On the floor in front of it a black oval of the same proportions reflects back up at us. This time, we are reminded more emphatically of Narcissus, getting lost in the reflective void of what looks like a black hole, or dark puddle. The presence of blackness within the exhibition brings to mind the philosopher Giorgio Agamben’s remarks in Potentialities: “The greatness—and also the abyss—of human potentiality is that it is first of all potential not to act, potential for darkness.” Agamben argues that since we can see darkness, our eyes have both the ability to see and not to see. This in turn signifies a willingness and ability either to do or not to do, which represents a fundamental aspect of humanity. In this dark exhibition, we do see the value we place on our engagement with the image and reality or authenticity that it presents.

Solaris Panel (2014) is a grid consisting of the glass from various black electronic devices, such as iPads and Androids, affixed to a large angled board. Rather than absorbing light as a solar panel would, it reflects the rotating asteroid to the viewer. Our reflection, fragmented and barely discernable, becomes a starting point to consider the boundary between inside and outside and the impulse to know through sight. Solaris, Stanislaw Lem’s 1961 science fiction novel, later adapted into a film by Andrei Tarkovsky, addresses the inadequacy of communication between humans and the unknown, presenting a paradox between rational scientific discoveries and human experience. Similarly, the tension addressed in Hirsch’s work, in the exploration of inner and outer worlds, forces us to confront our mortality and our desires through the potential hidden in the darkness of negative space.