The Dawning of the Age of Amalia Ulman 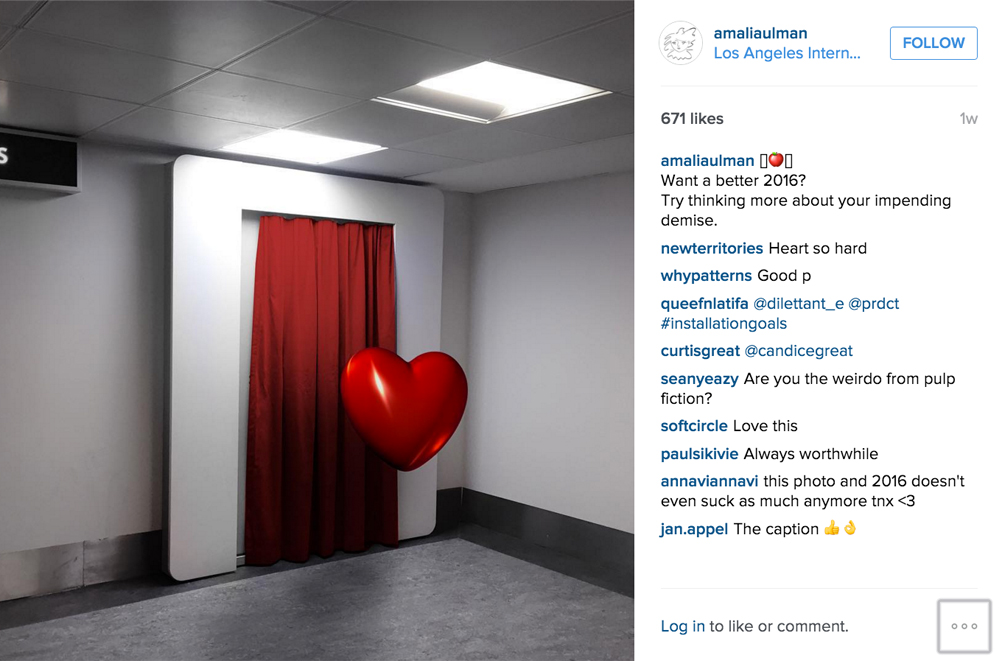 Proselytizers of the New Age popularly advise that you stop consuming mass media, especially the news. The news, it is said, is a downer—designed to keep you in fear. And fear is to be avoided as it lowers your vibration, keeping you from: Source, God, clarity and truth. From your Divine Right to feel good. Do you feel good after reading the news? So, stop. Now. While I haven’t completely taken to that counsel, I abide by some of its wisdom. I am wary of what I take in, as I am aware of how, as poet Ariana Reines puts it in her chapbook Thursday, “Everything your eye touches is the content of your kingdom.”

Today is Monday, January 11, 2016, and I am, as usual, in a mood for making and breaking patterns. Of media. Of diet. And patter, my writing. This mood, or mode, is so usual, I realize, it itself is a pattern; can I change it? (I meditate on it. Return with the phrase “same difference.”) I’m in LA, of course. I’m in LA on a Monday afternoon aware, for the first time in weeks, of what day of the week it is.

To live in Los Angeles, Claire “@TheUniverse” Evans told me, as I was readying to move here, involves a reconfiguring of one’s relationship to space and time. (I’m paraphrasing, as that was shared in a Facebook chat, and I dare not open the page today, ‘cause David Bowie died.) When Claire said that, I thought, I got it. Sprawl. Nine hours of rush hour. Subtlest seasons, etc. The more I’m here, though, the more I get how—it’s not the longer I’m here, it’s the more—the more present I am to Los Angeles, I get—space is far out, and time is not a clock.

Capitalism sucks clock. It’s a symbiotic relationship. One sign system stimulates the other, in turn. Fucking with our inner rhythms. Our need for free—that is, forgetting—time. This is increasingly so, what with our work in our emails on our phones faced with clocks. All this saleable data time-stamped. Apple supervision. iCan’t forget me not. Yet, iChoose to use these tools. ‘Cause—how cool—I can always go into my iCloud and see, e.g. (from my Notes app), that on this very day, one year ago, Amalia Ulman’s solo show “Stock Images of War” opened at James Fuentes Gallery in New York’s Lower East Side.

Last Friday, at Ulman’s opening of the same show, represented in LA at Four Six One Nine in Mid-City in collaboration with James Fuentes Gallery, attendees kept asking the artist what she did on New Year’s. I watched her blank, repeatedly, at the question. She tracked back from the moment. What day was it? January 8. Oh, a week ago. What did she do? Nothing. Or, she was working up to this show.

Ulman is actually, presently, obsessed with timekeeping. Or, the icons thereof. Clocks and calendars. Her apartment, office and business cards are covered in them. Staples-standard grids and rounds. You can spy some of that on her Instagram, where Ulman is ongoingly performing corporate life—in too-cute red-white-and-blue—to her 78.1K followers.

Ulman is most quantitatively known for a work executed on Instagram. Her performance Excellences & Perfections, which will be exhibited next month at the Tate Modern alongside work by Jeff Koons and Andy Warhol as part of group show titled “Performing for the Camera,” pissed me off. Girl totally trolled me. What a success. Basically, Ulman performed, on Instagram, from April 19 to September 14, 2014, then-trending tropes of Young-Girldom. She performed kawaii, a sugar baby, a white bae and la Lohan self-destruction. There was latte art, avocado toast, Agent Provocateur, a boob job, self-help mantras and many hotel selfies. Ulman gained many followers, plus lots of glossy press.

She performed what’s expected. What pop media wants from us. Us conventionally attractive enough to groom ourselves more so young women. I didn’t totally get it—that it was a performance. (It wasn’t declared such until the end.) I was one of many upset voyeurs. Triggered. Obsessed. I watched Ulman enact a means to power accessible to a body like my own; a means I’m hyperaware of, that I resist and consider. There’s pleasure in the feminine rituals she broadcast. I’ve considered a boob job. How good it might feel to be stacked like that. And that’s how I met Ulman. Insecure, emboldened, seduced and enraged, tripping on the power-knowledge-pleasure bio-cultural paradoxes of contemporary femininity, I wrote her.

It was only yesterday that I got the gravity of Excellences & Perfections. Its global relevance. I was researching the year 2015. I hadn’t done that yet, your expected year-end survey, ‘cause LA’s let me let go of chronic time. But capitalism—this pitch, a deadline. (It’s Tuesday now, by the way.) I’m back on the clock. And lo have I learned: Instagram is the medium of the Young-Girl. The top 10 Instagram accounts of 2015, based on follower numbers, are as follows: Taylor Swift, Selena Gomez, Kim Kardashian West, Beyoncé, Ariana Grande, Justin Bieber, Kylie Jenner, Kendall Jenner, Nicki Minaj and Khloe Kardashian. Combined they gained, in 2015, a total of 6,669,419,418 likes. Swift has an estimated net worth of $200 million. Google on down the line.

Wednesday. Synchronicity is a sign of enlightenment, that you’re perceiving Reality Clear, so says Terence McKenna. So get this: Ulman’s “Stock Images of War” show contains 12 sculptures, titled War in January, War in February and so on through every month of the year. She showed them first in January 2015 in New York. Then, surprise, they were booked to show 12 months after that, in January 2016, here in LA. The same night that Ulman’s show opened in LA, fashion designer/artist Susan Cianciolo also celebrated a launch. At 356 Mission. It’s a performance/installation titled “‘Though I have all faith so as to remove mountains, but have not Love, I am nothing’ ‘Corinthians,’” and it is also a representation, or refiguring, of a work previously and first shown in New York last year. That original New York show was called—ready for it?—“if God COMes to visit You, HOW will you know? (the great tetrahedral kite).”

“Oh really wow!” Ulman said when I told her about the Cianciolo synchronicity. “The stars work for everyone.” Because: it is Mercury Retrograde. That’s when Mercury, a planet that represents all things communication (language, logic, technology, art) appears to be going backwards (it slows), and so all things communication-related are slowed, or stalled, with it. During this time, which happens three or four times a year for three or four weeks each, it is advised that you don’t start new projects or buy new devices. It’s a wondrous time to revise and revisit, though. And, you may have no choice—Mercury Retrogrades tend to bring back ghosts from your past, like exes, unresolved traumas and dated work.

In New York, Ulman’s “Stock Images of War” sculptures had more space. You could walk around them, study their precarious curvature. In LA, my friend Anastasia accidentally bumped into one of the tanks, then a bicycle. I was delighted by their shake. Like a Slinky, or like Ulman’s pet pigeon Bob, they vibed for a while after impact. Except for the gallery size, “Stock Images” in LA and NY is set up the same, with black funereal curtains along all walls, and white aroma diffusers on little pedestals that spray apple-strudel smell into the air. It’s a plastic scent. Faint for the music blasted from loudspeakers. A soundtrack of songs the American military uses to pump bodies up for combat, like the Clash’s “Rock the Casbah” and Linkin Park’s “Hit The Floor.” The music crowds your senses, so you might not notice the smell if you missed the show’s release, which states:

And all of this happens in the midst of a nauseating smell of Apple Cinnamon Medley, of someone cooking apple strudel in factory quantities, of someone cooking and dancing to teenage hits, to easy political songs, because only in a state of neoteny it is possible to believe in the fantasy of the dehumanized other, the other as cake.

“All of this” is the soundtrack, scent and curtains, plus 12 sculptures of war vehicles made out of fine warped wire. They are cute things, not quite life-sized. Wheelchairs, tricycles, bicycles and tanks. Cartoonish, they exude a liveness that’s anthropomorphic and absurd. They remind me of the absurdity of humanity. We are So Dumb sometimes. Often, when I hear the news, I can’t help but laugh.

2015 was the year I embraced a Higher Power. It was also the year I cut out most visual news. No TV, little text. I opted to keep up with the world aurally. Mostly via Democracy Now! podcasts and conversations with friends and Uber drivers. I could say I did this to re-sensitize myself to the reality of current events, to the reality of every life involved, lives—each one of yours—as chaotic and holy as mine; hearing Amy Goodman’s voice crack, I’m reminded of this, gentle humanness. I did just say that and it made me feel—as the New Agers encourage—good. Safe and pleased, ordered, conclusive, this equals that.

But 2015 was also the year I sought to transcend all that. Story. Boundaries. Time and space. My body. Rote philosophy. I meditate. I’m so LA.

“Everything your eye touches is the content of your kingdom.”

How do you look?

Given the synchronized representation of Ulman’s “Stock Images of War”—two cities, one year apart—one is tempted to compare and contrast. How has our geopolitical context changed in the last year? For one, Isis is no longer foremost a goddess. For two, droves of creatives are moving here. LA is the New Art Capital. Does work look different here? Ulman’s sculptures do. In New York, I shivered at their resonance. How war is image to me. How so much is. New York now is a city of signs. World centre of: Financial capitalism. Cultural capitalism. Bad art selling well. I have a personal value system. It makes me love Ulman’s work, as she makes me think, feel and see anew. As she creates new forms for eternal human concerns. Like Amy Goodman’s voice, “Stock Images of War” re-sensitizes me to the gravity of war, power, politics, lives, matter.

But LA. Politics in LA. It’s like, we can forget about it. Mine and Ulman’s friend Dean said this recently. He was at Whole Foods in downtown LA last November, on Friday the 13th (!), when news of the Paris attacks were first streaming. There he was, he said, eating delicious readymade dishes, cool as an organic cucumber. Here is where New Agers thrive. Here is, people call it, “a bubble.” You feel safe. And also like you’re about to slip into the underworld. Ocean and mountain. Delusion and grandeur. Maps to the Stars Down to Earth. Everything is everything.

Tuesday, January 12, 2016. Water on Mars—that was big. And September’s lunar eclipse. Homo naledi (meaning: star), our latest ancestor, was discovered. Trump announced his running. More mass shootings. Cuba and the U.S. performed peace. Ulman made Forbes’s “30 under 30” list. Love Yourself. What Do You Mean? I’ll Show You. Bieber was never not on the radio. Sorry. Where Are Ü Now. Chantal Akerman died. And Sandra Bland. Conventions hold. Chrono/logic. Break. It. Up.

Yesterday, @amaliaulman Instagrammed a heart-shaped balloon floating into an airport departures gate. “Want a better 2016?” she captioned the animation. “Try thinking more about your impending demise.”

Witness me as I draw this X

Everything your eye touches is the content of your kingdom

The crown slides down over my eyes

The world exposes its egg to the Sky man

It will be Thursday again