David Balzer speaks with BGL about their latest project: a 53-feet-high, million-dollar work that forges a ferris wheel out of aluminum bus replicas. 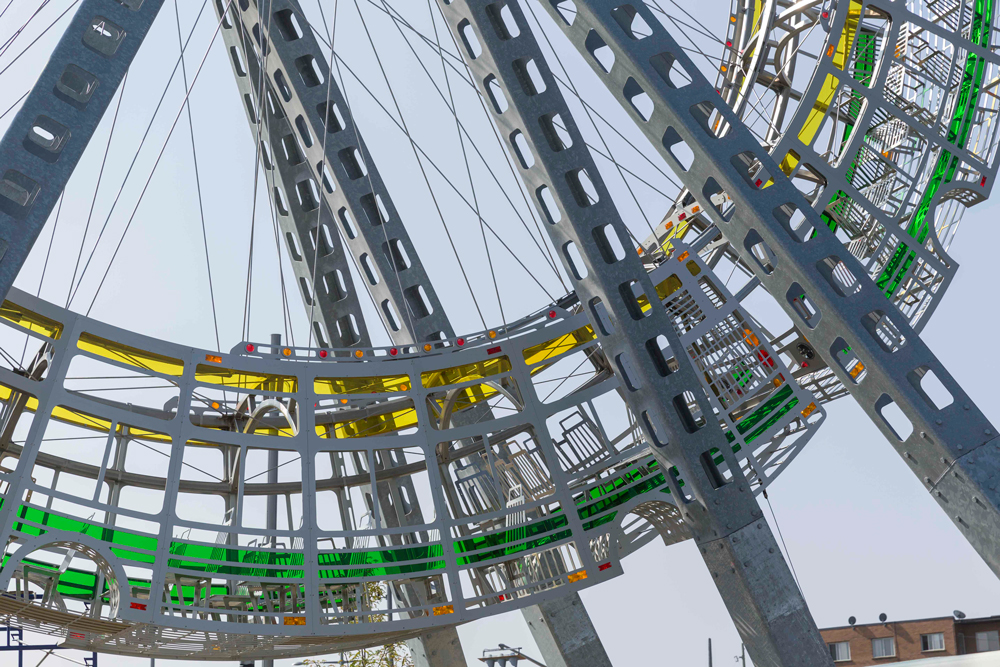 It’s been a large-scale year in every way for Quebec City artist trio BGL. As they opened their depanneur installation at the Canada Pavilion in Venice in May, they were already anticipating completion of two major public-art projects back home: Water Velocity, a twisted aluminum sculpture resembling a pool lane, for the Pan Am and Parapan Am Games in Toronto, and the just-opened La Velocité des lieux in Montréal-Nord.

La Velocité des lieux, loosely translated as “the velocity of places,” was first conceived in 2012 when the trio won a public-art contest—one of the largest in Quebec to date—as part of a $54-million revitalization project for the intersection of Henri-Bourassa and Pie-X Boulevards. The area is a major traffic hub in Montréal-Nord that sees approximately 1,000 buses and 100,000 vehicles pass through daily.

The ambitious sculpture has a price tag of $1.1 million—to some area residents a controversially large sum. The Province of Quebec’s Art and Architecture Integration Policy (Politique d’intégration des arts à l’architecture) dictates that approximately 1 percent of the budget from all public-works projects be reserved for art; while La Velocité des lieux was entirely funded by the City of Montreal, a similar commitment to public art is evident.

True to many of BGL’s previous works, and fitting for this traffic hub, La Velocité des lieux deals with movement. It’s a giant spoked wheel—resembling both an outsized bicycle wheel and an amusement-park ride—that rests on eight legs and is comprised of bent, aluminum-frame replicas of buses adorned with multicoloured Plexiglas. It weighs 9 tons and is 53-feet high.

“We forget the wheel is so important,” say BGL in a phone interview. “It’s everywhere now; it’s such a major invention.”

Despite its ferris wheel–like appearance, you can’t rideLa Velocité des lieux. “It would cost another million for that to happen,” BGL joke.

The collective admits that they hadn’t visited Montréal-Nord much before the project, a fact that speaks to the impetus behind the revitalization. “Maybe, art could transform the neighbourhood,” they say. “When you create a sculpture, host a festival or do any art event, a neighbourhood can change slowly. Montréal-Nord is known for its gangs. This may change the future conception of the area.”

This article was corrected on October 5, 2015. The original article implied that La Velocité des lieux was funded by the Province of Quebec. It was entirely funded by the City of Montreal. Canadian Art regrets the error.