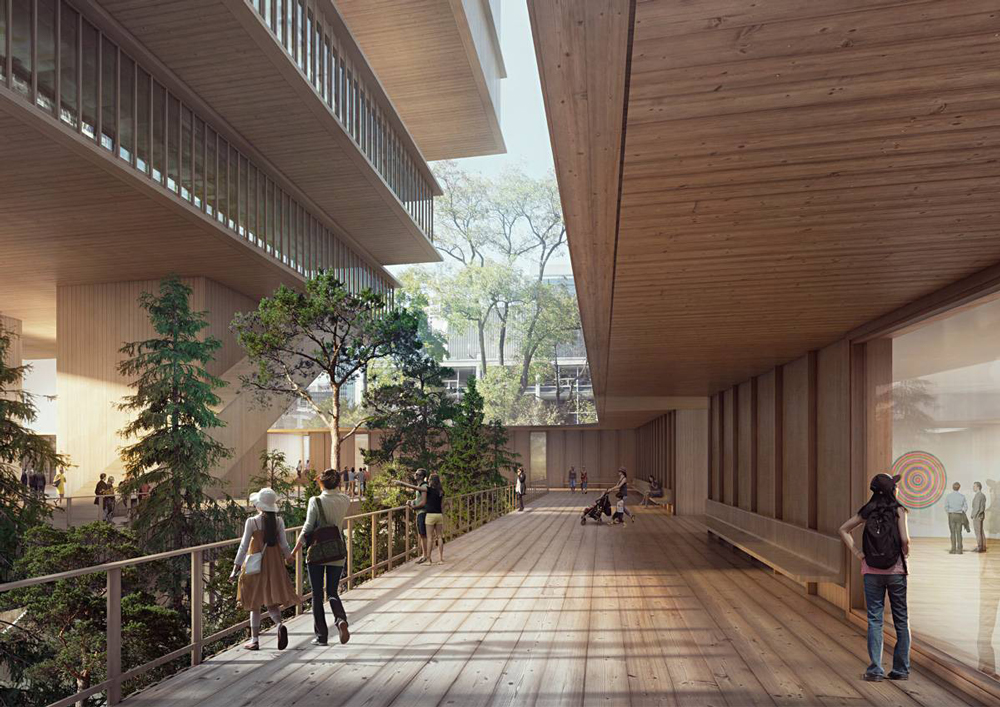 When the Vancouver Art Gallery revealed their conceptual design for a new building earlier this week, it was evidently a far cry from their current neoclassical courthouse. Gone are the ionic columns, ornate marble and porticos; instead, Swiss architectural firm Herzog and de Meuron has developed a soaring, wood-wrapped structure with boxy levels that recalls West Coast Modernism taken to new heights.

Caoimhe Morgan-Feir spoke with Kathleen Bartels, director of the Vancouver Art Gallery, and Christine Binswanger, partner at Herzog and de Meuron, about the proposed use of the new building, looming funding issues, construction deadlines and the public’s initial reactions.

Caoimhe Morgan-Feir: One of the core features of the design is the increased exhibition space, which goes up to 86,000 square feet. What is the gallery’s general plan for using the space: displaying more of the permanent collection, increasing programming of contemporary art, introducing more travelling exhibitions?

Kathleen Bartels: It’s a range of those functions you just outlined, but I think it’s important to note that we don’t have any dedicated space for our permanent collection in our current location. In the new facilities, out of the 86,000 square feet, 40,000 will be dedicated to the permanent collection. We will do rotations about every three years, and at any given time the gallery will be showing nearly 1,000 works from the collection.

When you think about the history of artmaking in British Columbia, from art of the First Nations to photoconceptualism, those works will be on view for the world in Vancouver.

CMF: If you’re seeing the building scale up, are you planning to increase the staff on hand for these new facilities?

KB: Yes, we did a study four years ago with Lord Cultural Resources that dealt with the staffing requirements for the new gallery. We’re updating that now that we have a conceptual design. Certainly the early study really helped inform the spaces that would be required for staff; that was taken into account with the design.

CMF: The releases didn’t mention the timeline: what are the major goals established for moving ahead with the project, and what timeframe are you hoping these will be accomplished in? I’ve heard 2017 as the goal for construction to begin. Is that accurate?

KB: We’re looking at late 2017 for construction to begin, and then opening in 2021. That’s our current timeline.

CMF: Are there other goals that you are working towards before construction begins, and what’s the timeline for those?

KB: Well, obviously fundraising. There’s a lot of fundraising to do at the early stages. The value of the conceptual design is that it allows us to go to the broader public. Not only our board, who have been extraordinarily generous, but now to take it to the community, our colleagues and supporters across the country, not just in Vancouver, and our government partners. So it’s a milestone moment, not only to launch the public phase of the campaign, but also just to continue on with the design process.

CMF: In terms of funding, there has been the donation of the site from the city, $50 million from the province and $23 million from the board. I realize that the gallery is not commenting on private pledges thus far, but are you feeling confident about raising the remaining $277 million?

KB: Yes. We wouldn’t have unveiled this conceptual design if we didn’t feel confident that we could realize our fundraising goals. As you said, we do have other commitments on the table that we will announce at a later date. This is just the beginning, but there will be more announcements in this next phase. We haven’t gone out to a broad public, and that includes other donors.

Now that we have our schematic design we can start talking more specifically with our government partners. We certainly have had a lot of grassroots discussions with the federal government over the last two years. We’ve been meeting with several ministers, and that has progressed, but we’ve kind of stepped back with it right now because of the election cycle.

CMF: How will the remainder of the fundraising be divided in terms of private and public sources?

KB: $150 million minimum from the private sector, and then $150 million from senior levels of government. There hasn’t been a significant cultural project in this country that hasn’t had support from both the provincial and federal government at very high levels. So we’re confident.

There also hasn’t been a major civic project at this scale in BC since the library, which was in the ’80s. So I think this is a moment for us to go forward with our government partners and ask for something significant.

CMF: The public reveal was last night. How have you been finding the reaction so far?

KB: I think so far it has been very positive. We almost got a standing ovation last night, and the response from the audience—we had 2,500 people in the theatre, and when we unveiled, there was an audible gasp. Lots of clapping throughout Christine and Simon’s presentation, and a celebratory party afterwards, which was great because there was an opportunity to get a lot of feedback, and to answer questions. I think it was extraordinarily positive.

Christine Binswanger: It was on the future site of the building.

KB: Which was great, it was right across the street and we had a big tent.

CB: It was very low-key. There was a food truck, a DJ. The people that the building wants to address and relate to were there: young people, the design community, artists. People would approach us, having seen the presentation, and wanted to talk to us.

CMF: Was it noticeably different from other reveals you’ve done in the past?

KB: Some of the media people we’ve been working with have said that they haven’t seen this level of media coverage and attention focused on a conceptual design before.

CB: It’s also clear that, a project of this scale, not everybody is going to like it. We’ve got to make sure that most people do.

CMF: Do you expect some people will be won over in the process?

KB: Yes. That’s important. We have an exhibition on view now that’s free to the public, to see the renderings and the models, and we have comment cards for people to give feedback. That will be a very important process as we move forward, not only in Vancouver, but also throughout the province and in certain parts of the country.

CMF: Christine, from an architectural standpoint, how does the design reflect local or regional materials and concerns? I know that you visited Haida Gwaii for research—were any of the outcomes of that trip integrated into the building?

CB: Yes, I visited Haida Gwaii, and that research wasn’t integrated, formally speaking. We understood the climate of this region, we understood that people want to be in the sun, but they also want to be protected from the rain. We saw how many people are on the streets and outdoors here in Vancouver. They live nearby, near downtown, and all of this leads to the desire to have public space. The gallery tries to offer this—it is extremely generous.

We could have put a box there and had it land on the sidewalk and that’s it. But this proposal is really offering quality space that is accessible to the public.