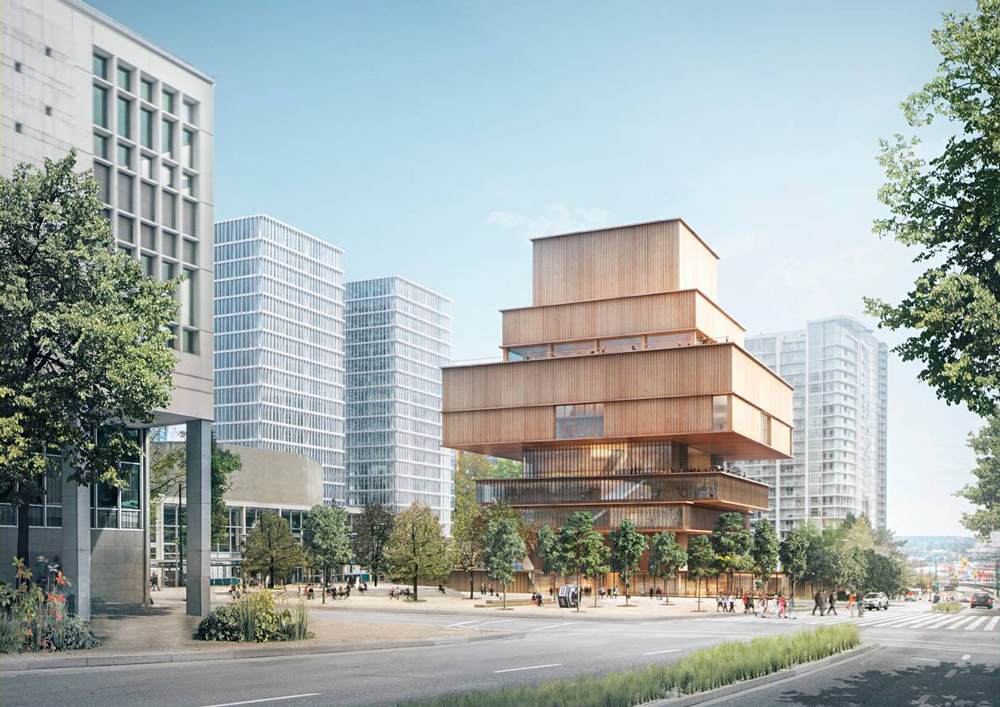 The wooden structure is comprised of stacked, irregularly sized boxes. With more than 85,000 square feet of exhibition space, the gallery will sit on stilts above a 40,000 public courtyard with a sunken garden. Escalators will lead into the exhibition spaces, a 350-seat auditorium on the second and third floors, a resource centre and a restaurant on the fourth floor.

The release of the plans marks the latest development in the gallery’s redesign process, which has been in the works for the past decade. The plot of land at West Georgia and Dunsmuir Streets, currently a parking lot, was selected in 2005 as a potential new location; Vancouver City Council approved plans for an expansion and move in 2013; and in 2014 Herzog and de Meuron were announced as the architects of the new gallery after beating out four other architectural firms shortlisted for the commission.

While architectural plans are forging ahead, several deadlines for funding targets have slipped by. The city agreed to allocate the plot of land at 688 Cambie Street with the caveat that the gallery needed to secure $150 million from the federal and provincial governments by April 30, 2015. These funds have not yet been raised, and the city is still in talks with the VAG.

The VAG’s new building plans come at a time of significant structural change in Vancouver’s cultural scene. Emily Carr University of Art and Design plans to complete a new campus at the end of 2017; Polygon Gallery (to replace Presentation House Gallery) is slated to open in 2017; further afield, the Audain Art Museum will open in Whistler in 2016.