Taras Polataiko on Conflict and Art in Eastern Ukraine 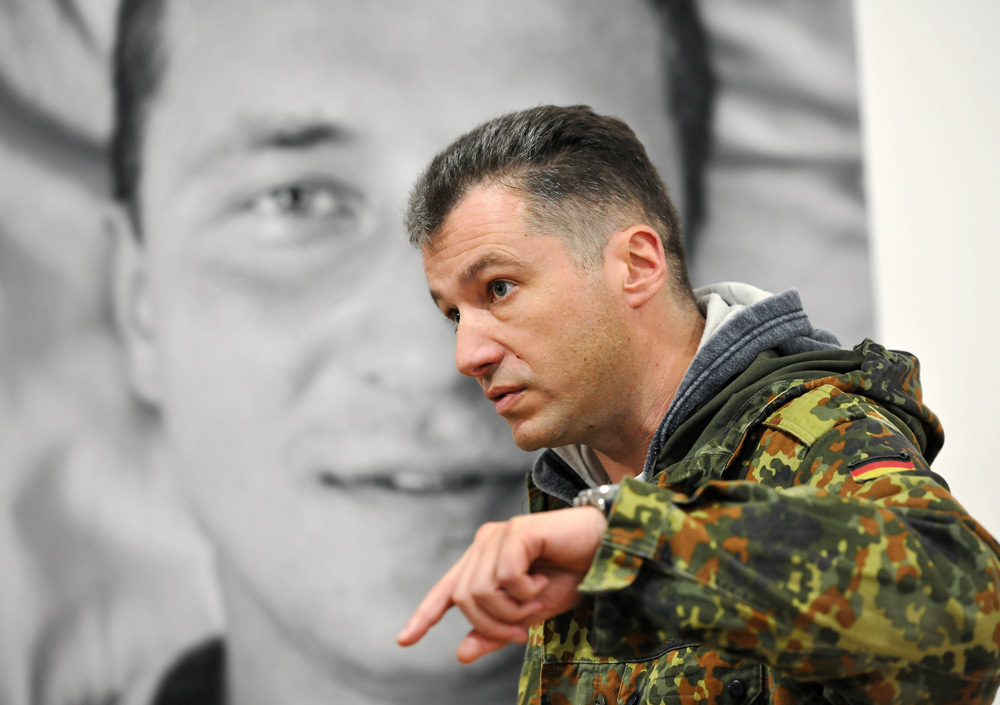 Artist Taras Polataiko with a work from the War. 11 Portraits series.

What happens to art-making and cultural communities in times of war? Lethbridge-based artist Taras Polataiko is currently in Ukraine, where he is curating an exhibition for the National Art Museum of Ukraine in Kyiv. Polataiko’s “War. 11 Portraits,” now showing at the Ukrainian Embassy in Ottawa, is an installation for which he photographed soldiers at Kyiv’s Central Ukrainian Military Hospital and interviewed them about their experiences. It will subsequently show at the National Museum in Lviv, Ukraine, and at Barbara Edwards Contemporary in Calgary in May.

David Balzer conducted the following interview with Polataiko over email, focusing on the fate of art and artists in the ongoing conflict in Eastern Ukraine.

David Balzer: How, in your view and in general, are artists in Eastern Ukraine responding to the conflict?

Taras Polataiko: If you mean the actual war zone, unfortunately the conditions there are far from art life. People are surviving. The building of the only Centre for Contemporary Art that existed in Donetsk was overrun by the armed thugs and forced to move to Kyiv. The humanitarian situation there is grim. The last time I heard about art being made there was in the summer, when an anonymous graffiti artist made tough street art poking fun at the “republics,” and the criminal or Russian-security service background of much of their “leadership.” No one has heard of him since.

DB: Do you see the cultural community taking a unified/overall or fractured stance to rival political agendas in the region?

TP: I don’t know any art people or intellectuals who support the “republics.” It’s just too obvious that the whole thing was fabricated by Putin to destabilize the fragile young democracy, which he sees as a threat. The cultural community is pretty uniform. As far as the mindset of the general population within the occupied territories, it’s anyone’s guess, because people are scared to say what they think.

DB: Is there a flight of artists from the area?

TP: So far there’s about one million refugees fleeing the war zone. I know a painter who had to go back and forth between Kyiv and Luhansk to look after her disabled mom. She was super stressed. I’m not sure if she’s still able to travel there, because the division line between Ukraine proper and the occupied zone has hardened and now there are roadblocks and security checks to prevent terror attacks, which happen every second day in various Ukrainian cities.

DB: Are exhibitions being presented despite the conflict? If yes, are they critical of the escalating turmoil in Donetsk and Luhansk?

TP:I can’t imagine anything critical happening there. The “republics” are not designed to promote democracy or critical dialogue. The regime there is a magnified reflection of what’s taking place in Russia. Hysteria rules from TV screens. It’s some sort of telemocracy now. To give you a taste of what goes on in Moscow—the NGOs have been legally declared “foreign agents” and public protests are illegal. Legally you are allowed to stand in public areas with some signs as a single person, but not as two or more people. And even then you get detained under some “violation of public order” verdict. That’s Moscow. In the “republics,” you just get shot by some dude with a machine-gun who’s having a bad hangover.

DB: What have been and are the specific risks to the Eastern Ukrainian cultural community, as you see them, especially with the new threat of martial law?

TP: If you mean Eastern Ukraine in a broader sense beyond the occupied territories, life is kind of normal…if you discount daily terror attacks, general mobilization, freefalling currency and ongoing stress about the war zone expanding westwards. There were tensions and some violence in Odessa during the summer, when Putin was still working on cutting the land corridor to Crimea, but it all calmed down. For now anyway.

DB: How are artists, curators and galleries currently navigating the art market in Kyiv, including said market’s intrinsic ties to Russia?

TP: Art pretty much stopped selling. The shows do go on but there are no sales. People who still have money give to the army, the wounded and the refugees. There’s a huge volunteer movement happening. People give what they can. Three weeks ago, when there was intense fighting, hundreds lined up to donate blood for the wounded. Artists donate pieces to charity auctions; musicians play concerts with proceeds going to the army, the wounded, etc. I’m travelling a charity show, donating money when I can and helping to load trucks with donated stuff for the guys at the front.

As far as ties to the Moscow market, it’s over. Some artists I know refused to go there and cancelled their shows when Crimea got annexed, even before the real war started. There’s a strong sense of civilizational divide now, similar to how it was in Berlin when the Iron Curtain went up. On a personal level, it’s hard to concentrate on work. You check the news all the time and you think that you’re not doing enough to help the ones who do the actual fighting.