Can an architectural model be revolutionary? A new show argues yes, but ultimately fails to build support for its cause 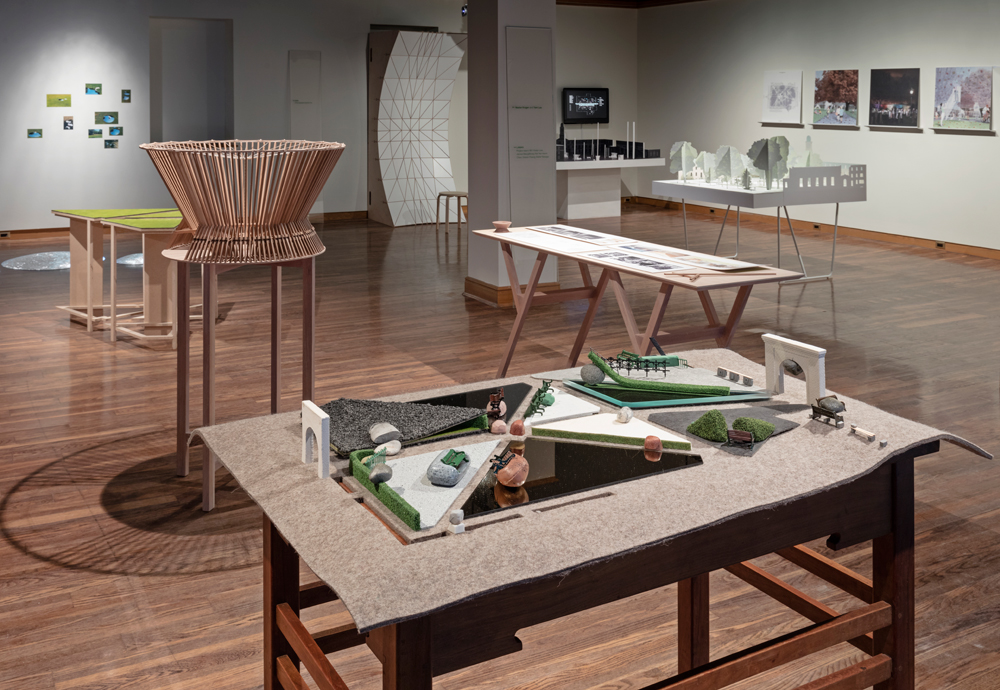 A view of the exhibition “Making Models” at the Art Museum at the University of Toronto. Photo: Toni Hafkenscheid.

In 1367, two competing visions for the dome of the Santa Maria del Fiore were staged for display inside the unfinished structure in Florence. Citizens were invited to interact, inhabit, scrutinize and ultimately vote for the architectural design of their choice. These models, approximately 15 feet tall and 30 feet wide, were buildings in miniature—tests inhabiting real space that provided visitors tangible, intimate engagement with a potential future floating far above their heads.

Today, 650 years since the competition for the great dome, models and the process of modelling—analog, digital and ideological—have become integral aspects of architectural practice.

“Making Models”—an exhibition on now until October 7 at the Art Museum at the University of Toronto, with a full-scale fabrication on view outdoors on campus until November 25—demonstrates that little has changed in centuries around exhibiting architecture. It also suggests that, equally, little has changed in terms of locating the model within the complex systems of presentation that translate representations into buildings.

Who do the proposals inside the exhibition actually serve? How do they unintentionally model an idealized, class-based and able-bodied public? What do they say about the systems and economies regulating architecture with within the city of Toronto, where perceived cultural value is equated to commercial gain? And, more insidiously, how do these models present who or what we should be modelling ourselves after?

For “Making Models,” curator Yan Wu convened nine collectives to produce speculative proposals for the university’s Sir Daniel Wilson Quad. One of these was chosen by a jury to be implemented at full scale in late September, while another winning design is to be selected by popular vote on October 7.

As a show, “Making Models” boldly argues that it “offers a new platform for the advancement of innovative critical ideas in experimental architecture in Toronto.”

As with this narrow institutional representation, a focus on certain regions seems difficult for architecture to transcend. The location of economic hubs across a the vast landscape of the nation only furthers this inevitable city-based isolationism. This is especially the case regarding the inherently place-bound architecture of the public realm. The exhibition’s theme of “Meet Me There” envisions a complex social meeting space within the existing logics of the university quad—but “there” proves challenging, if impossible, to articulate. 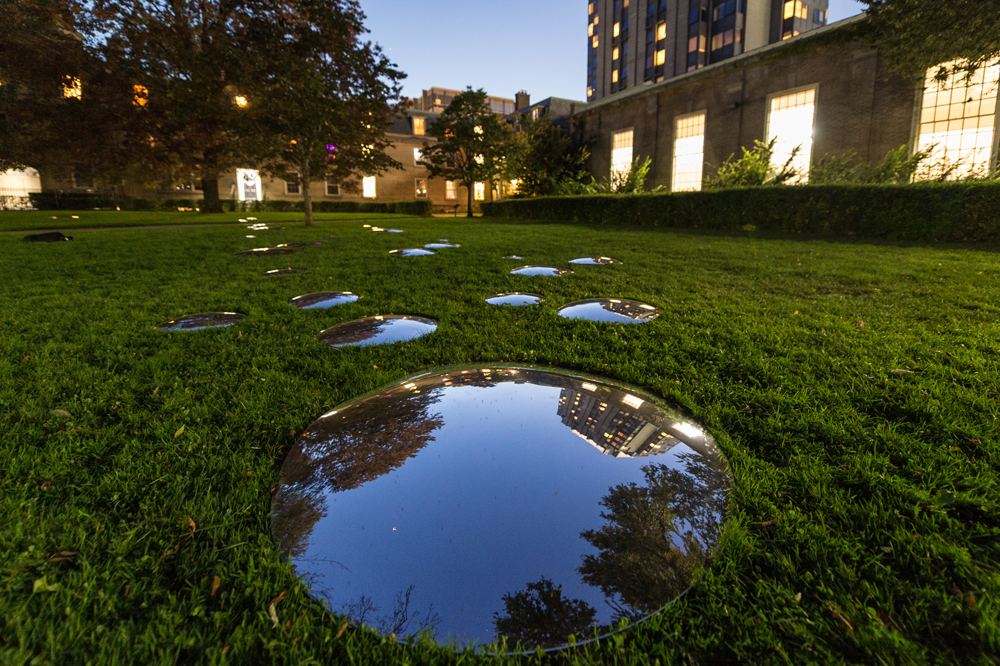 Wa Wa by Uufie was chosen by a jury to be installed on a University of Toronto quad. It will be there until late November. Photo: Dominic Chan.

And as much as these speculative proposals desire to be of a place, there is an inescapable urge to be elsewhere. Nowhere, Now Here by LAMAS, selected as a finalist by the jury, attends to both this metaphoric and literal placelessness.

The 2014 runners-up for the prestigious MoMA PS1 Young Architect’s Program, a similar engagement with public architecture, LAMAS proposed a semi-opaque canopy punctured by circular voids to negotiate existing trees while providing space for lifeguard-like stations to provide visitors private vistas of the quad.

With visualizations importing the screenshot aesthetic of New York-based MOS Architects and a model deliberately playing with context—freely removing portions of the existing architectural framework of the quad—Nowhere, Now Here seems to take its isolated locale as an opportunity to be anywhere but here.

Digital projections of pedestrian conversations animate the stoic white models of Lateral Office’s Rings/Rooms. Meanwhile, the placement of the convex, teardrop-like surfaces in Uufie’s Wa Wa—selected by the jury to be installed at full scale—form and deform within the span of a looped projection .

But are conversations like “Did you see the exhibit of these?,” “It’s starting to get late,” and “I think this one is heated,” the most sustained interactions architecture can frame? It would appear so, given the imagined exchanges between users in the projected surface of Rings/Rooms and the novelty interactions around self-reflexivity presented in the compelling mock-up for Wa Wa.

Through an almost complete focus on presentation, these models in the exhibition fail to gesture outward to the contested application of digital modelling or its relationship to glossy renderings found on billboards, in brochures and the walls of architecture schools. The ability to pan, zoom and orbit provides a kind of intimacy and detail only achievable through advanced computation. And commands such as trim, divide and extend deliberately draw on physical metaphors while remaining contained to the materiality of the screen interface.

No model can become a building by itself. The model is one tangible moment in a network of non-linear forces that Robin Evans describes as “subterfuges and evasions that one way or another get round the enormous weight of convention that has always been architecture’s greatest security and at the same time its greatest liability.”

While the presentation techniques of digital material have become representational strategies themselves, the complex digital iterations that exist between micro-models and full-scale fabrications appear lost inside “Making Models”—though they fill desks, drawers, printer trays, printing beds and hard drives in many design offices.

In digital Cartesian space, where a model exists both at a scale and simultaneously scaleless in its capacity to be exported or printed at infinite, the model is more image than object. And, when projected on the surface of the vertically mounted physical models for Rings/Rooms and Wa Wa, the model becomes an operation of flattening both into a single surface.

This issue of architectural model as image prompts considering these projects in light of critic Villem Flusser’s discussion of technical images. According to Flusser, technical images “draw up plans on deceptive surfaces, and these plans are meant to become life plans for their recipients.”

The models in the show, then, are similar kinds of deceptive surfaces—projectors rather than mirrors. They are not the maps presented in process, partial or schematic models; rather, they are plans intended to be effectively scaled at a moment’s notice, apparatuses designed for an immediate imitation that hinges on the jury outcome.

RINGS/ROOMS // University of Toronto quad (2017). Project team: Brandon Bergem, Lola Sheppard, Mason White. #makingmodels2017 . . . Rings/Rooms infiltrates a conventional yet historic campus quad, and provides a catalyst for emergent social habits. It encourages students to wander off the given path into a series of open landscape rooms. A constellation of rings encircles select trees of various ages in the Sir Daniel Wilson quad. Rings are designed to address different forms of gathering: resting, working, reading, talking, playing, or reflecting. With their mirrored supports dissolving into the context, rings seem to hover at different heights relative to the body. Rings/Rooms offers a destination to counter the always moving bodies on the paths. On view at @artmuseumuoft Curated by @yannnnnnwwwu

Can the deceptive surface of an architectural model—arguably a representational technique designed to test form, context and connection—be revolutionary?

In STAGING REVOLUTION by Public Studio, a projection of grainy archival footage of student protests from 1967 and 1970 is displayed just beyond an inanimate model populated by angular stepped stages and temporary scaffolds equipped with oversized megaphones to amplify collective action.

In a year dense with standoffs against governmental powers, including the recent Black Lives Matter intervention at Yonge and Bloor to protest the deportation of Beverly Braham, Public Studio’s self-described “speculative architecture for a theatrical staging of revolution” finds itself at quite a distance from actual, ongoing resistance in the city of Toronto, and the public spaces such resistance occupies.

It seems appropriate that a model of “stages” here, as opposed to platforms, renders resistance more spectacle than a revolution. 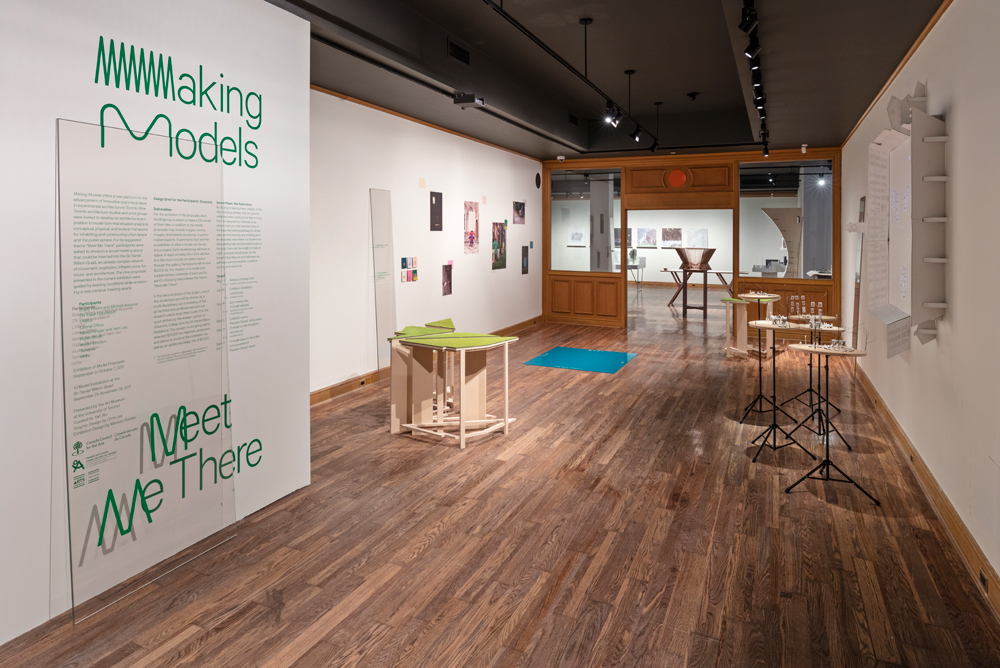 A view of the exhibition “Making Models” at the Art Museum at the University of Toronto. Photo: Toni Hafkenscheid.

While many teams flirted with the restrictive design brief, including studio junction’s Intimare model, as well as the fractured and de-centred abstractregion by Nestor Kruger and Lam Yau, critical intervention appeared limited to curator Wu’s framework as opposed to the deliverables themselves. And, in the case of CN Tower Liquidation’s jury-only performance, to an Instagram account.

Let me return to my original questions: If these proposals that will soon litter academic CVs were chosen in private by an unsurprising selection of representatives, reinforced by the aforementioned performance and a token student vote, what are we to make of the idea of “public” presented here? As place-making runs parallel to social, political and economic dislocation, who do these speculative models serve to place (and equally, displace) as an ideal image of the “public”?

Taken together, the contents of the exhibition are a less than subtle reminder that architecture in the public realm is decidedly not for the public. It’s chosen by designers, curators, critics and developers alike, in private, for us. Is this really the only model there is?

“Making Models” proves that not all platforms are made for the same kinds of dialogue. Like Mitchell Akiyama and Brady Peters’ parabolic reflectors in Spatial Sonic Network, some platforms are simply chambers in which familiar sounds reverberate.

Evan Pavka is a Toronto-based writer and educator. He currently teaches design studio at Ryerson University. 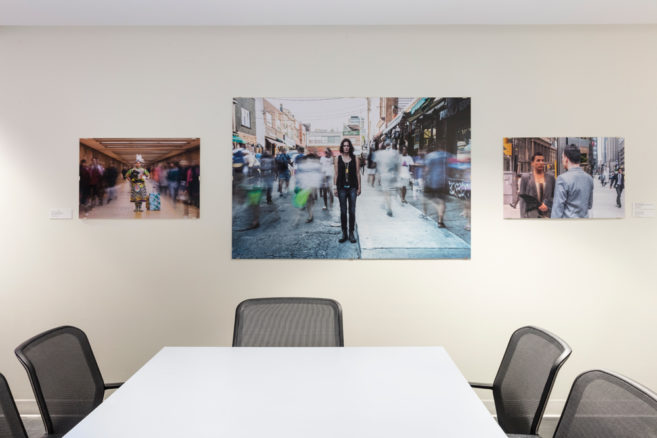 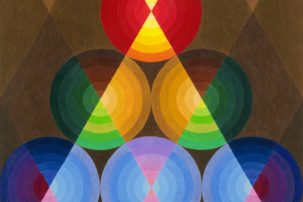