How to Stay in Your Lane 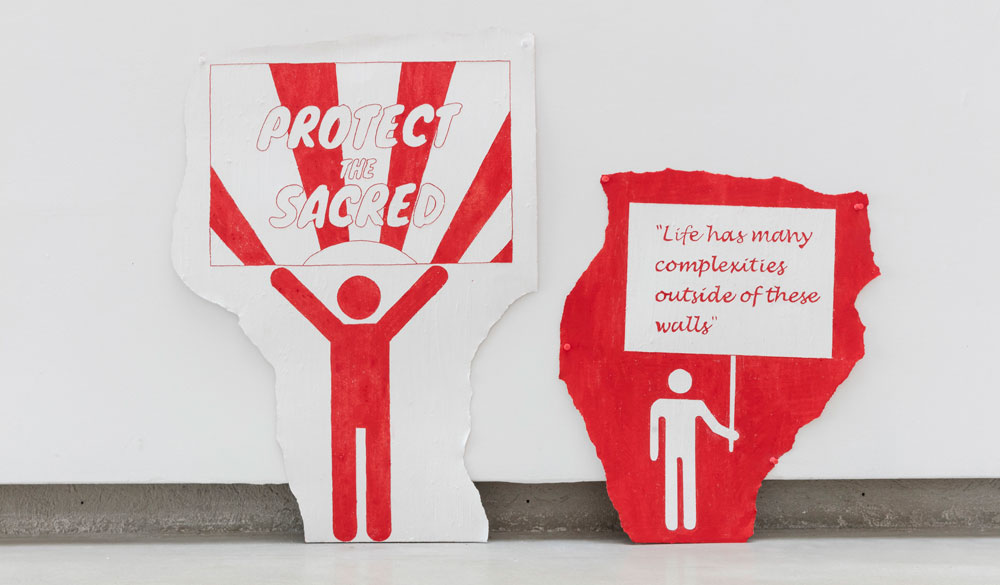 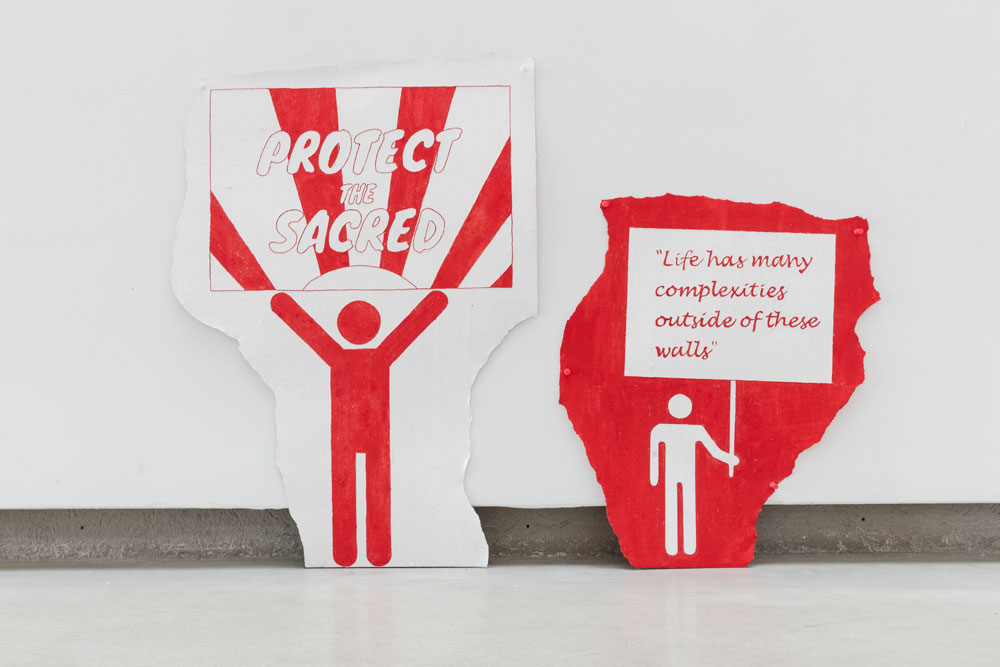 It’s late November and I am pacing the hall that makes up the Fleck Clerestory at the Power Plant Gallery, taking in the small, rough-edged, red and white paintings that dot the walls and compose Michael Landy’s “DEMONSTRATION.” I’ve been invited as a speaker in the gallery’s Sunday Scene public speaker series, one of many brought in to discuss Landy’s exhibit during its six-month installation in the space.

Landy and the Power Plant solicited contributions from Torontonians by email and social media using the hashtag #TPPdemonstration. According to the gallery’s submission guidelines, the public was invited to submit “images, text, slogans, words, or symbols of what makes you happy or sad, what you feel strongly about, want to react against, protest, or support and champion, issues that capture Canada’s social and political reality, and affect our contemporary landscape in 2017.” With the help of assistants, the artist selected and produced drawings based on the submissions, which were then included in the “wall of protest.”

I am familiar with Landy’s CV, most notably his performance/installation Break Down (2001) where he methodically documented and destroyed all of his worldly possessions with the aid of 12 assistants. When I was first confronted with that particular work, I asked myself, What does it take to destroy everything you own for a project? My lived experience as an artist on the margins and my expertise as an anti-oppression consultant and liberation educator taught me the answer was simple: privilege and the security of knowing you will be okay. I am immersed in the art world on a daily basis, and most of the artists I meet, the ones who create critical and nuanced work of protest, are living precarious lives with little financial security and can’t imagine destroying all their worldly possessions and still surviving. For those of us who create art about our lived experiences, it’s a costly labour that takes a toll on our mental health, our financial security and even asks us to risk our lives. Artists who document the work of protest are often criminalized and reprimanded both professionally and legally for their work. Landy’s work is funded through government bodies both in Canada and Britain, and individual sponsors such as finance minister Bill Morneau.

It’s important to situate “DEMONSTRATION” in a cultural, social and political landscape. Produced to mark the 150th anniversary of Canadian Confederation, it’s difficult to ignore the staunchly colonial setting, both from a place of content and context. Standing in the exhibition, I rock on my feet, heel to toe, and I make a mental list of dozens of local artists whose entire bodies of work centre on protest, social justice and activism, who could produce a far more nuanced, important and revolutionary exhibit on themes of resistance. I am startled and triggered by an illustration of Alan Kurdi’s body, a 2-year-old Syrian refugee child who drowned in the Mediterranean Sea in the autumn of 2015. Low on the wall, near the gallery floor, is an alarming reproduction of the washed up body of a racialized child fleeing conflict. I breathe out and think of my own brown-skinned son. I think of those who most protest Canada’s oppressive structures and the disempowering hierarchies of the world, who boldly create art on the margins, relegated there by race, class, gender expression, sexuality, ability, age, status, place of origin and religious affiliation. I know it is our bodies that are more likely to flee violence, only to drown anyhow, photographed in death and reproduced as art by someone whose social power is directly adverse to our survival.

Other expressions of resistance against violent patriarchal, transphobic, homophobic, classist, ableist, xenophobic and inaccessible paradigms are used irresponsibly and stripped of context throughout the work. One work, for example, has a male-bodied figure holding a sign that reads, “Stop Premature Christmas Decorating!” In another, a female-bodied figure holds a sign in the air that reads, “YOU BELONG HERE,” and in a third, the sign held says, “JUST TALK” and “DO IT LATER,” alongside a drawing of a polar bear on a Nike symbol. Juxtaposed with what one lecture participant described as “first world problems,” the work feels lazy and disrespectful. A piece that reads “the social invasion” sits atop the illustration of the dead body of Alan Kurdi; it feels strange. Foreign and Indigenous language placards punctuate some of the illustrations and they amplify the feeling that Michael Landy should stay in his lane. Aesthetically, the work is rather unremarkable: technically unexceptional illustrations, and poor imitations of the work of artists on the margins. Overall, the show is rather forgettable.

It’s equally critical to address the producer of the work: the storyteller matters deeply to the story. There is a power in being a cultural producer, historian and documentarian of pivotal moments of resistance, protest and even paradigm shift. Michael Landy’s social location becomes markedly relevant; he is privileged by race, gender expression, class and citizenship in ways that create a harmful power dynamic between him as the producer, and the protest work he orchestrates. Landy’s British citizenship, and the financial support of the British Council he brings to this project, in the context of a nation that is still a British colony, is in direct opposition to the narratives of anti-colonial resistance co-opted by portions of the exhibit.

There are many Black, Indigenous and People of Color artists in Canada whose work centres on these themes, artists such as Jesse Gouchey, Syrus Marcus Ware, Zun Lee, Leila Fatemi, Amber Williams King, Amanda Strong and Frizz Kid to name a few. This narrative is best told by those of us who live in Canada and on the margins.

As someone whose work centres on decolonizing contemporary arts institutions, galleries and museum spaces, participatory art practices intrigue me. They beg the questions: who is invited to participate? Who is included in the narrative? Who curates the narrative and how are they related it to it? Who retains ownership of various elements, images and other creative products within the work? Who financially profits from it? Who has access to the work once it’s produced? Who does the actual work of production?

From the early stages of the exhibit, racialized, Black and Indigenous artists voiced concerns over the appropriation of their creative production without permission or credit. Many of the small paintings, which utilize the high-contrast aesthetic of the Canadian flag, are poorly plagiarized reproductions of memes and digital art by individuals now rendered anonymous. The project is contentious, for all the wrong reasons.

In my experience as a consultant for contemporary arts institutions, including dozens of galleries, I am aware there is a fear that the arts are losing audiences. The truth is that art spaces that only reflect white, Eurocentric experiences, content, critiques and curation are the ones losing audiences. It’s inevitable that not representing Toronto’s 51% “visible minority” population (potentially larger as it intersects with other oppressed identities), will reduce engagement and investment in these spaces.

In larger and more abstract terms, I think about the social responsibility and role of art. Art serves to document, resist, disrupt, agitate, leave evidence and heal. “DEMONSTRATION” has the feeling of “pop protest”/“demonstration lite.” A neoliberal packaging of revolutionary acts inside the sterile, impersonal walls of a gallery. The best protest art happens at protests, which are sites of cultural production that embody both resistance and resilience.

The appropriation of protest culture, by an artist who is largely sheltered from the impact of the issues addressed in these models of resistance, is not only distasteful, it is actually dangerous. There are very few spaces where Black, Indigenous and People of Color artists can create art about our lived experiences and be compensated for it, and Landy has taken up residence in that space. 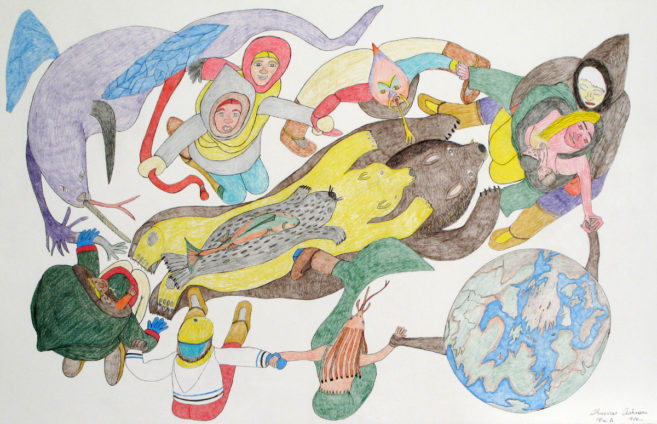 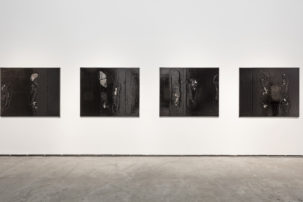