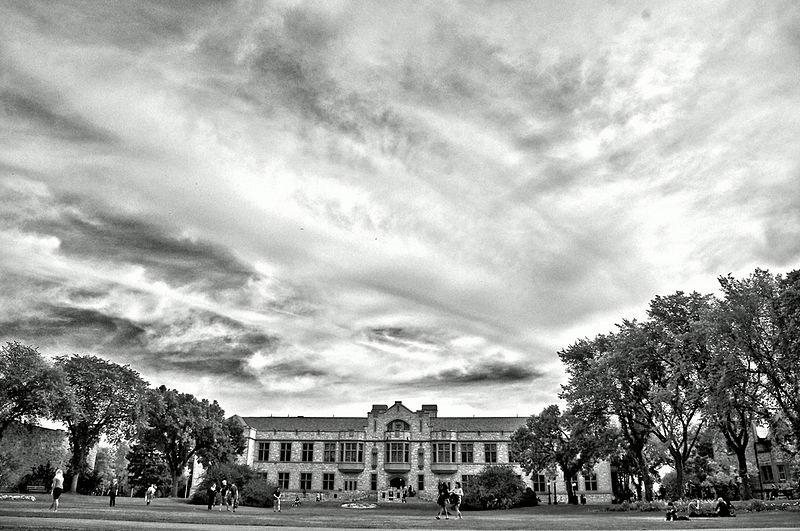 A view of the University of Saskatchewan's College Building / photo Hatchamadra

Since the announcement on November 15 that the University of Saskatchewan had decided, due to fiscal tightening, to suspend operations at its legendary Kenderdine Campus at Emma Lake, 220 kilometres north of Saskatoon, the arts community in the province and across the country has been up in arms. The closure is effective through to 2016, at which point the campus’s future is uncertain.

“I was shellshocked,” says Joanne Bolen, a current University of Saskatchewan art student who organized an online petition against the closure. “Professors, students, alumni—they’re all upset.”

To date, almost 1,500 names have been added to the petition, with signatories from Japan, South Africa, Belgium and Norway, and including US dancer Devon Perri, relatives of William Perehudoff as well as of the Regina Five, and Saskatoon-born contemporary artist Luanne Martineau.

Emma Lake was established in 1935 and has been an important part of arts and culture in Saskatchewan ever since.

Its importance crested in the years following 1955, when the summertime Emma Lake Artists’ Workshop began at the University of Saskatchewan’s Kenderdine Campus. The workshops became a legendary meeting-place for the international avant-garde, who in turn influenced high-modernist abstraction and minimalism in the province, most famously embodied by the Regina Five. Key visitors to Emma Lake included Clement Greenberg, Barnett Newman, Donald Judd, Anthony Caro, Kenneth Noland, John Cage, Frank Stella and Ronald B. Kitaj. The campus has also become an equally vital aspect of experiential-education initiatives for the biology department at University of Saskatchewan.

This week, it was also announced that the University of Saskatchewan would initiate administrative-staff layoffs in fine-arts and humanities departments.

Bolen has addressed her Emma Lake petition to Greg Fowler, acting vice-president, finance and resources at the University of Saskatchewan.

In a phone interview with Canadian Art, Fowler said that the university’s priority was to “reduce growth in our costs” at this point in time and said that a recent proposal for the Emma Lake site required $3 million in capital funding and $230,000 annually in operating funding.

“What we were confronted with was, Do we keep this thing running at the cost of about 1 million a year, or do we move as quickly as we can to suspend operations for 3 years?” Fowler said. He also noted that the facility is “closed for 8 months of the year already” due to its lack of winterproofing.

Additional concerns pertain to the campus’ current state of disrepair which, left unattended, will inevitably worsen over the years, and thus escalate costs involved in reopening it, Fowler said. He described the site as “beyond rustic” and noted there are structural-integrity issues. “From our standpoint,” he said, “we would need substantial investment to make it safe—not just up to university standards.” Fowler notes that having the campus designated as a heritage site would make it more difficult to reopen, as repairs would have to restore the original designs of the buildings.

While some onlookers have speculated that the university is planning to sell the Emma Lake lands, Fowler says the university has no firm plans for the site as of yet.

“I can’t say never, but I can certainly say that this [selling the Emma Lake lands] has not been discussed.” Fowler said. “What we decided to do was a suspension of operation for 3 years so we can figure out what to do with this important historical and cultural site,” one option of which may be a collaboration or arrangement with an adjacent provincial park.

“[The Kenderdine Campus] is important historical and cultural lands,” Fowler said. “It wouldn’t be seen as something we’d want to dispose of. We’re not a cash-driven organization, although we do have to become financially sustainable.”

A University of Saskatchewan steering committee is due to meet in the new year to further examine proposals for the Emma Lake site.