Eight hours before Lianzhou Foto Festival was set to open on December 2, 2017, officials from the Chinese Cultural Ministry informed organizers that Toronto artist Suzy Lake’s solo show in the festival was to be censored. All exhibitions in China must first report to local, provincial, then federal cultural offices for screening, and at 2 am that morning, the completely installed exhibition had already been approved at each level. Yet at the eleventh hour, the ministry issued a list of censored works, including Lake’s, offering no explanation. According to one of the curators—who is Chinese, works in China and Canada, and preferred to remain anonymous as a source for this piece—officials said simply that Lake’s works felt “pessimistic.”

The three photo works that incited this pessimism were Rhythm of a True Space, and Beauty at a Proper Distance/In Song and Peonies and the Lido from Lake’s Beauty and the Aging Body series, in which Lake employs the same media strategies that fetishize feminine youth to call out the ageist sexism of visual culture. The theme of last year’s festival was “Your Selfie Stick (and you)”; Lake, whose four-decade career often sees her performing for the camera to disrupt conventional representations of women, is one of the foremothers of feminist selfie art.

“I wondered if there were any problems related to me—if I had provoked or offended the Chinese government in the past, but I couldn’t find any clues,” the curator says. The festival had supported Lake’s work, even using it in their promotional material, but organizers feared jeopardizing the event. They suggested the curator fake compliance to avoid the confiscation of the work, or further trouble with officials, so during the opening, there was a decoy lock on the door of the exhibition space, allowing visitors to sneak in. Later that night, local officials locked the doors for real, so that even festival employees couldn’t open it. It was reopened after most visitors who had come to see the festival had left.

The curator suspects that censorship of Lake’s work might reflect the attitudes of Chinese men towards women. “Most Chinese government officials are male, and although Suzy’s work looks benign, they may feel that it’s not the ideal public face of a woman. They prefer women to be sweet, young, submissive,” the curator explains. “In pop culture we always see young women performing and self-representing, so that aging women are absent from public consciousness. Suzy’s work challenges that—it’s political, but it doesn’t announce it.”

Though the curator can only speculate about the cause of offence, “censorship is a common thing in the art world in China.” “The political atmosphere there [was] very strict [last] year,” they add. The hyper-surveilled climate has forced artists and curators, Chinese and not, to develop strategies to ensure artworks are palatable enough to pass rigorous vetting. Regardless, results are never guaranteed. A festival of Lianzhou Foto’s scale requires submission of completed artworks almost a year in advance, first to local, then to provincial, and finally to federal officials. If the work is approved, it must remain unchanged, even months later. “We self-evaluate before proposing to any Chinese institution,” says the curator. “We try to bring works that [covertly] address social or political concerns, [without] directly challenging Chinese authorities. We have been insistent on being subtle and respectful, but now we feel that there are no rules. It’s strict and unreasonable and random. It’s getting wild. And the reaction is quite brutal and disrespectful to artists.”

Lake wasn’t the only artist to get censored at the festival. A body of work about the legacy of American segregated schools by New Jersey–based photographer and Guggenheim Fellow Wendel White wasn’t censored quite like Lake’s, but officials pulled the didactic texts, leaving no explanation of the lingering anti-Black racism that White’s work depicts. Officials also pulled didactic texts from Japanese photographer Tsuneo Enari’s portraits of orphans of Japanese soldiers who were left behind after the Soviet army invaded Manchukuo in 1945 and were subsequently raised by Chinese families. The most blatant censorship concerned a project documenting African migrants engaged in entrepreneurial activity on a pedestrian bridge in Guangzhou. Officials taped black paper over portions of photographs from Little North Road, an archive of 25,000 images taken by Daniel Traub with Wu Yong Fu and Zeng Xian Fang.

“In my circumstance,” Lake says, “I would’ve done nothing more than write a letter to the minister of foreign affairs about my situation, but because of [the curator] I was aware of a lot of the censorship activity that was happening with artist colleagues in China, on the basis of human rights as well as cultural exchange. The thing is that even with all of the care that the artists and curators [involved with the festival put into] making sure that nothing was offensive according to the cultural ministry, even if all the guidelines are followed, they go out the window.”

“I bet this work pushed them over the edge. It’s aggressive,” says Toronto-based artist Sara Angelucci, who photographed Lake in Peonies and the Lido, and who also showed work in the festival, without issue.

“For how terrible this censorship is, I think it speaks to the effectiveness of Suzy’s work. It’s pushing buttons,” Angelucci adds. “Somebody saw a feminist action by an older woman that they thought was threatening somehow.”

When Angelucci attended the festival’s opening, she noted a hushed atmosphere. People were talking about what had happened while looking over their shoulders. But since she was unfamiliar with the context, she didn’t want to risk jeopardizing the curator. “What’s the right thing to do when you don’t even know who the officials are?” says Angelucci. “I was told that ‘an official’ came—but who is that? There’s no face to even the staff working there. You could tell people are scared. It’s strange because we’re used to free speech, and to be in a context where that’s not allowed and there are real repercussions for people, such as prison—you don’t know [how much] what you say may hurt somebody else.”

“What happened in Lianzhou is similar to what happened elsewhere in China last year,” another Chinese photography curator, who also wished to remain anonymous, told me over email. “First of all, there’s no correspondence whatsoever between the organizers and the officials. It’s an order: you obey or you get [screwed] up. There was some room for negotiation, and tricks you [could] play in the past, but now you either be your own censor or the censors just come without notice, put locks on the door, remove works on the wall, paint the texts black. If you fix it, they come again. We will never get to know who we are dealing with, how the decisions were made or how the system works. We are fighting against a ghost.”

Since the government doesn’t offer Chinese artists any financial support, artists in China argue that “we don’t speak for the government; we speak for ourselves,” the festival curator says. “But many people feel it’s useless or punishable to challenge this. More people in the world, not just Chinese, have [become] used to being silenced under the threatening of the Chinese government. It’s not a good thing. Being from China I understand what it’s like to work in China, but this is beyond what I could understand and accept.”

“This is one facet of reality,” read their first email to Lake that regretfully informed her of the censorship. “The art world is still trying to create, and common people are still trying to live…There is vigour and hope there.”

This week, a Kitchener museum incorporates vandalism of its Canadian flag into its exhibition. 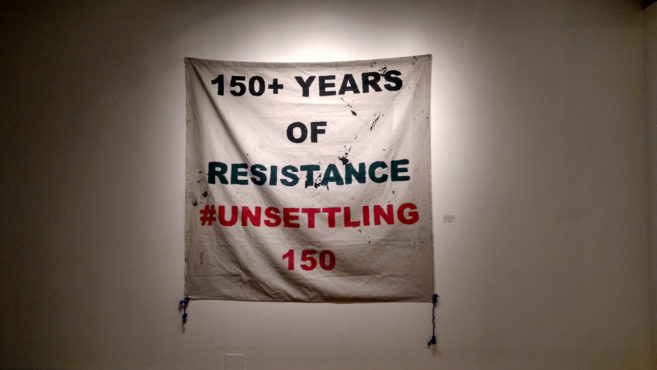