This week, a Kitchener museum incorporates vandalism of its Canadian flag into its exhibition. 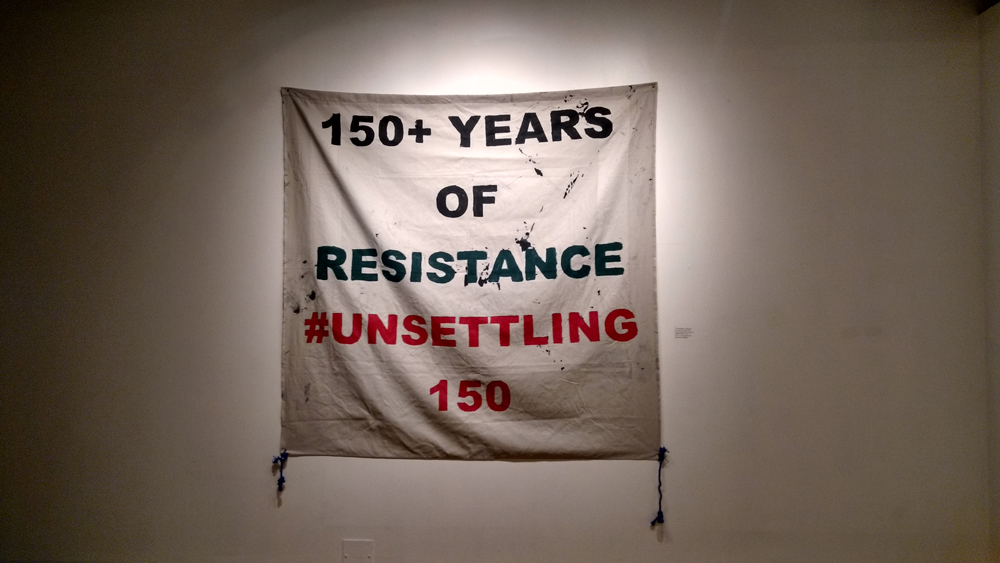 The banner that anonymous activists obstructed Themuseum's Canadian flag with now hangs in its exhibition, “A Cause for Celebration? First Things First.” Photo courtesy Themuseum.

In the early hours of Canada Day, vandals smeared a four-storey-tall Canadian flag above Themuseum’s sign in Kitchener in black and left behind a banner that read, “150+ years of resistance #unsettling 150.” Though the black was scrubbed, Themuseum staff said the protest banner was pertinent to the museum’s main exhibition, “A Cause for Celebration? First Things First”—which features three Indigenous artists confronting Canada’s colonialist assimilation strategies. The gallery incorporated the protest banner into the exhibition. “I think that for somebody, a large flag was a perfect target to make sure that their message of resistance was heard,” CEO David Marskell said. “It is important to understand how resistance allows understanding of the many voices that make up Canada, its history and the land.” Themuseum will host a public reconciliatory dialogue on July 12 to “continue the conversation on reconciliation, reflection, and resistance.”

Since 2013, Italian clothing magnate Luciano Benetton has been commissioning and collecting thousands of multimedia pieces, which all measure 10 by 12 cm, created by established and emerging artists worldwide. Selections from his collection are exhibited every year in a large touring project called “Imago Mundi.” This fall, the exhibition will highlight Canadian artists from across the country in “Out of the Bush Garden” in Venice. The exhibition’s curator Francesca Valente announced on Thursday that she will highlight 10 PEI artists—Becka Viau, Gerald Beaulieu, Christine Trainor, Hans Wendt, the late Lionel Stevenson, Norma Jean MacLean, Brian Burke, Judith Scherer, Eun-Mee Yang and Donald Andrus—to give “the Maritime provinces the visibility they deserve and give a voice to artists who don’t have one yet at the international level.” Other Canadian artists already in Benetton’s collection are Vera Frenkel, Allyson Mitchell, Suzy Lake, Moshe Safdie, Margaret Atwood, Michael Snow and more.

Breaking Barriers Film Fund announced yesterday that TIFF will partner with CBC to support a Canadian screenwriter who is a woman, Indigenous, belongs to a visible minority or identifies with a disability, through a $10,000 Diverse Screenwriters Grant.

The Kelowna Art Gallery appointed Toby Lawrence as curator on July 4. She will oversee the gallery’s exhibitions and publications, as well as the gallery’s permanent collection activities. Lawrence has held curatorial and programming positions with the Vancouver Art Gallery, the Art Gallery of Greater Victoria and Nanaimo Art Gallery. She holds a masters in art history from University of British Columbia, and is currently working on a PhD in the faculty of creative and critical studies at UBC Okanagan. Recent exhibitions at the Art Gallery of Greater Victoria include “Conversations with Lucie Rie,” a potter whose seven-decade career culminated in an exhibition at the Metropolitan Museum of Art in 1995, the year of her death; Kika Thorne’s “Multiplicity of the Singularity”; and Carlos Colín’s “Definiciones (Definitions).”

Thirty finalists in the running for the Kingston Prize, Canada’s portrait competition, have been announced. The Haynes Connell Foundation will present the winner with $20,000, and two honourable mentions will receive $2,000 each, during the opening at the Peel Art Gallery on November 4, 2018. The portraits will be exhibited at the Firehall Theatre in Gananoque, ON from October 6 to 22, 2017. The exhibition will then be shown at the Peel Art Gallery in Brampton, ON from November 4 until January 2018. 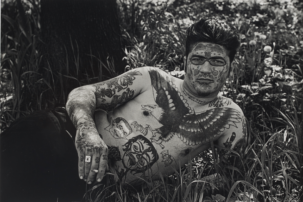 The Art Gallery of Ontario’s recent purchase makes their collection of work by the late American photographer the largest in Canada.