Miami Report: The Good, The Bad & The Artsy 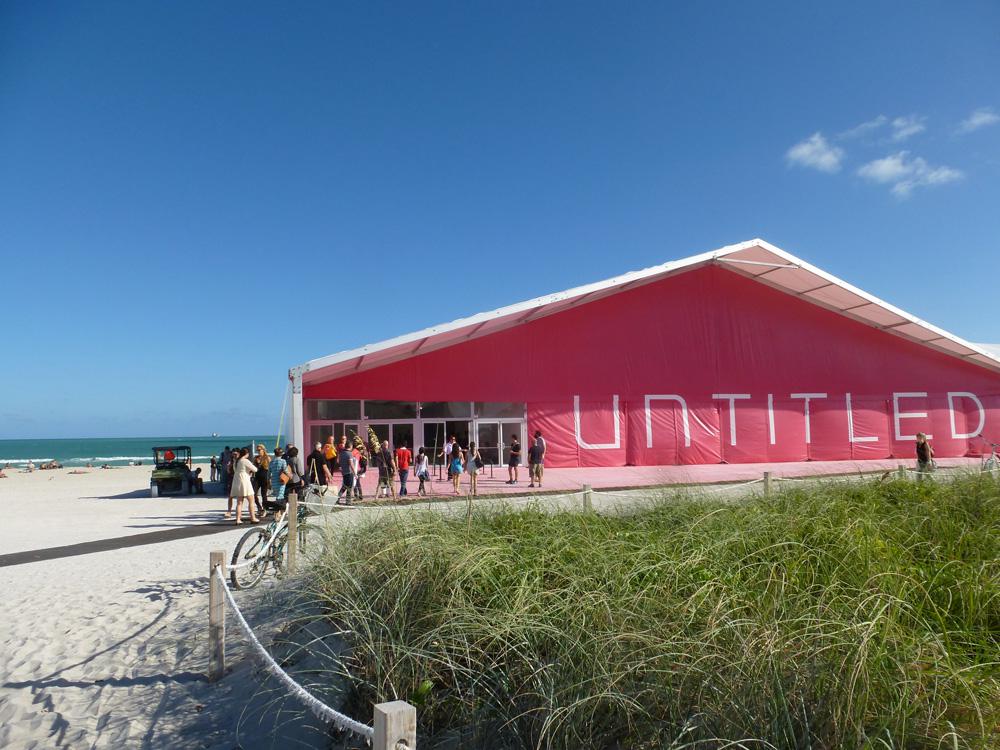 The difference between “cute” and “cutesy,” “sex” and “sexy,” “art” and “artsy” is the difference between action and intention. It’s the confusion of the latter with the former, often accompanied by strain and/or pretension. (Cf. Lady Gaga.) The 11-year-old Art Basel Miami Beach, now one of the world’s largest art fairs, is an inarguable perpetrator of the artsy. In 2013, Art Basel Miami Beach is ABMB—the acronym that launched a thousand conspicuous-consumption hashtags. It’s the locus for international collector culture and destination-art tourism; a playground for the scantily clad young and the well-dressed and plastic-surgeried old; the site of luxury-brand launches and pop-up stores in a kind of champagne-swilling postscript to the fall fashion weeks. All this in a city already known for its artifice, heat, and high real-estate rates abetted by wintering celebrities who live in gated communities with names like “Star Island.”

But the art is there. It’s everywhere, actually; the fairs have migrated across Miami Beach’s causeways and into Miami proper. In this sense, ABMB is a misnomer; it’s Miami Art Week with, this year, over 20 fairs, most of them unaffiliated, orbiting the Miami Beach Convention Center where ABMB makes its home. In an interview last year for Miami’s NPR station WLRN, the Miami Herald’s Jane Wooldridge explained this haphazard evolution. Art Basel wanted to colonize, and selected Miami Beach based on the high-rolling collectors (Carlos and Rosa de la Cruz, Don and Mera Rubell) who were based there and attended the Swiss fair every year. The event did not, claimed Wooldridge, come about “because we were smart enough to try to get it here.” Miami Beach retains that air of blithe indifference and bewilderment: hotels are packed to the rafters; cabs are difficult to come by; waiters are flummoxed; construction remains unfinished; Surf Style has run out of free totes. The art mirrors this. All those booths, talks, screenings, public-art launches, private collections, institutional ribbon cuttings—it’s impossible to see them all, make sense of them all, plan around them all.

Interesting, then, are the traces of order and concept. The two-year-old Untitled art fair was the place to be for that, and its gimmick was enticing: an art fair with a curator, New York’s Omar Lopez-Chahoud. Last year the fair was invitation-only, and this year participants were selected from an application process. Toronto gallery Georgia Scherman Projects has participated both years; in 2013, when the gallery was selected again, Lopez-Chahoud specifically asked for works by Margaret Priest. Lopez-Chahoud’s process, which included directing the arrangements of works in every booth, is thus novel in its deliberateness. (Most art-fair booths are arranged exclusively by dealers with sales in mind.) A few galleries I spoke to expressed concern that Lopez-Chahoud was not familiar enough with the artists, overly stressing instinct and raw formal aesthetics in his approach. Still, the fair was delightful, with its bright light (a mix of artificial and natural that created deep colour saturation in the works, and in visitors’ clothing and fresh tans) and with its beautiful beachfront tent designed by architects K/R. And “delightful” doesn’t describe most art fairs. Indeed, as beachfront neighbour to Scope, a fair that’s devolved into booth after booth of sub-Gagosian Pop and street art (I curmudgeonly counted the deconstructed Marilyns), Untitled was a welcome antidote.

Canadians were a solid presence at Untitled. In addition to Scherman, there were booths by Montreal’s Parisian Laundry (who had a plum spot right at the entrance) and Galerie Division, and Toronto’s Diaz Contemporary, Katharine Mulherin and Cooper Cole. Lopez-Chahoud made some fine selections for Parisian Laundry’s booth, pairing David Armstrong Six’s sculptures with Janet Werner’s paintings in a stylish demonstration of the gallery’s sensibilities, and of contemporary art’s interest in modernist quotation. At Mulherin’s booth, Jonathan Scott’s gorgeous, delicate sculptures of book covers backed with gold leaf were in vitrines. At Division, a Wanda Koop painting was perfectly set off by the tent’s slate-grey floor. Black-and-white photography looked equally sharp above this floor. In addition to the Canadians (Annie MacDonell at Mulherin and Suzy Lake at Scherman), I drooled over Nobuyoshi Araki, Daido Moriyama and Keizo Kitajima at San Francisco’s Little Big Man and Karlheinz Weinberger at Oslo’s Rod Bianco Gallery.

As an idea, Untitled might be said to spring from NADA, one of the most prominent non-ABMB fairs in the area, and unusual both for its location at the Deauville resort in North Miami Beach and for its status as a non-profit with no visitor-entry fee. Canadians included Julia Dault at International Art Objects and Vancouver’s Apartment, which showed Moving Stills (Cowboys and Indians), a big 1991 work by Garry Neill Kennedy, ceramics by Wayne Ngan, a laminated C-print, Ecce Homo, by Althea Thauberger and paintings by Alan Belcher. NADA Projects, a quiet echo of ABMB’s Nova and Edition sections, stressed individual artists, showcasing one work or a series. I loved Pay What You Wish, But You Must Pay Something by Austin-based artist Devon Dikeou, who has exhibited tongue-in-cheek works at NADA before. This year’s effort consisted of replicated-to-scale donation boxes from notable American art institutions (the title is a play on the Metropolitan Museum of Art’s pay-what-you-can policy) and the boxes were placed in the projects booth and throughout the Deauville hotel. Many had no text on them to indicate which institution they were supposed to be from, or what their purpose was, but all had money in them. (Dikeou is giving the proceeds to the respective institutions she’s mimicked.)

Pay What You Wish… was a clever testament to the chunks of change the one-percenters in Miami were ready to indiscriminately drop on culture, and the message was simultaneously hopeful and troubling. More apparently cynical was New Yorker David Lewis’s booth, which featured no art, instead consisting of a big wall text announcing represented artists, with the gallery’s contact email below. At the non-profit NADA, this read as an artwork as much as an ad. The real intention, as reported by New York Observer’s Gallerist blog, was somewhere in between: “it looks like a ‘fuck you’ gesture, but Mr. Lewis actually got sick a few days before the fair and was unable to travel. (Artist Dawn Kasper made the wall drawing.)”

Sustenance is important, but often in Miami Beach, one wants to wade. Aqua Art Miami is, like NADA, housed in a hotel, but its feel is more quaint. Aqua’s hotel on the grand art deco strip of Collins Avenue has no ballrooms, so each gallery’s booth is housed in a room overlooking an adorable courtyard. (Up the street, Ink, a works-on-paper fair, has an identical concept.) On Saturday around 4 p.m., wandering amid the suites (which included Toronto’s Lonsdale Gallery) with a glass of wine in my hand and the sun about to set, I couldn’t really complain about Aqua’s offerings being more like Scope’s than Untitled’s. I was soaking up the atmosphere; I wanted to; I was being artsy. And I was loving every minute of it.

For more on this year’s Miami Art Week, see our interview with Bill Burns, our slideshow from Art Basel and our list of Canadians at the fairs.