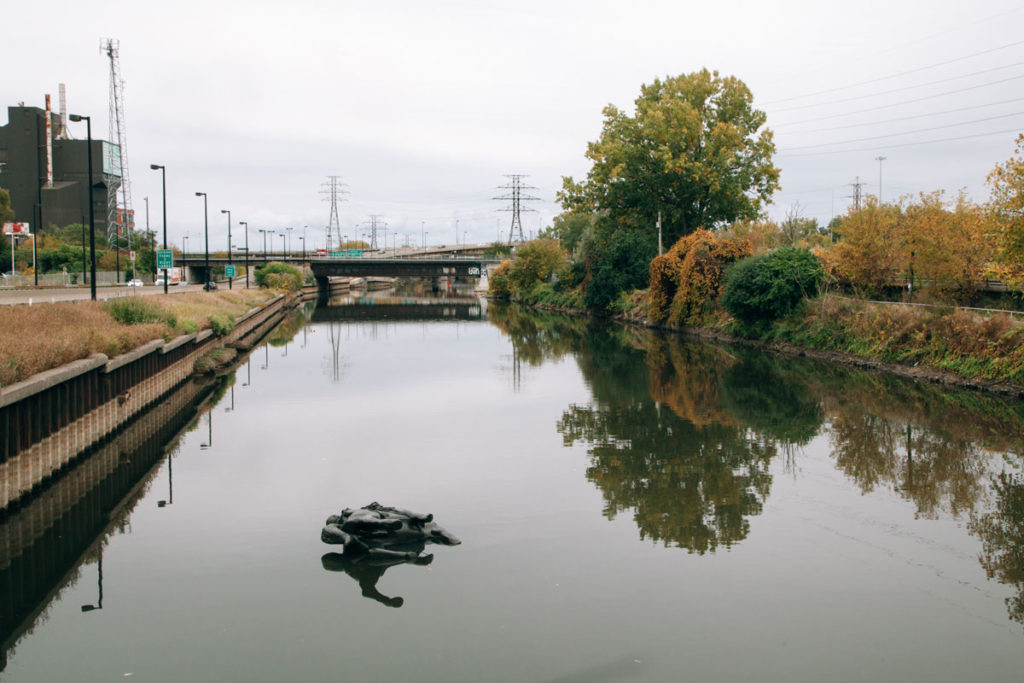 For four Sundays this fall, Toronto performance duo Life of a Craphead—consisting of Amy Lam and Jon McCurley—have been dumping a life-size replica of a 15-foot bronze statue of King Edward VII on horseback into the Don River, and letting it float down the river. The performance reckons with the ongoing glorification of colonial genocide in public monuments, and it does so at a moment when such monuments’ relevance is being called into question. (This particular monument was erected in colonial India in 1922, was moved to Toronto’s Queen’s Park in 1969, and still bears a plaque stating “The Emperor of India.”)

Accordingly, Lam and McCurley’s performance has received wide attention, most recently in the Toronto Star and CBC.

This past Sunday, however, the performance also attracted attention from three white supremacists, who showed up at 1 p.m., as the November 12 performance was starting. They filmed the project. They also approached artist Amy Lam, among others, to ask questions about “European-Canadian identity.”

Lam refused to engage them, as did several other artists in the audience.

“It’s so ridiculous…that they talk to people about European civilization as if it’s not a genocidal motive that they have,” Lam says in an interview. “It’s already a struggle to be an artist of colour and make this kind of public art. There’s the work itself, and then now here’s this additional burden.”

“I think that it was very effective to ignore them and walk away from them—they weren’t aggressive,” Lam says. “But they also shouldn’t be given a pass as ‘debaters about European civilization’ because that is their front; that is not what they’re actually talking about.”

The three men were later identified as possibly being members of a group called “Students for Western Civilization.” On its website, the group closely identifies its cause of white nationalism with the glorification of local monuments; their latest poster campaign shows white men standing next to three Toronto monuments juxtaposed with the slogans “Europa Forever” and “Europa Eternal,” among others. (Such art-historical imagery is now fairly common among white nationalist groups.) The group has also been posting news items about Lam and McCurley’s project on its Facebook page.

“They filmed the main guy walking up to the [Don River] bridge ­and looking at the statue floating down [the river] sorrowfully,” said artist Yuula Benivolski. “It was kind of pathetic.”

After the incident, Benivolski posted photographs of the white supremacists on her personal Facebook page to make others aware of the intimidation attempt.

But both Lam and Benivolski hope recent events won’t keep audiences away from the performance’s next, and final, iteration on Sunday, November 19.

“It was upsetting what happened … but it is also upsetting if the story that circulates is that these people are going to return and fuck with you,” says Lam.

Fear, after all, is what many white supremacists have been hoping to sow in Toronto and elsewhere. And Lam wants to make sure that is tempered; otherwise, “I feel like it could actually have a detrimental effect on our performance and the work itself.”

“The media narrative of white supremacists—these scary men with fascist haircuts—it’s what they want, right?” Lam added. “They want to portray this image of being totally fearsome, like they’re like the most evil people on the planet.”

Lam is hoping, and hopeful, that audiences will still turn out this coming Sunday.

Such support is essential in an era when many Canadians still remain unaware of the increased activities of white supremacist groups across the country. Of late, there has been a spate of white nationalist postering at campuses, for instance, with vicious online backlash when these posters are taken down.

“When I told someone that it happened, they were like, ‘Oh, I didn’t know that they existed here,’” says Lam. “And I was like, ‘What? No! Of course they do.”

So while the artist doesn’t want to sensationalize the white nationalists’ action, she does want to acknowledge it.

“It is worthy to talk about in the sense that they are being more active,” says Lam. “And who is going to stand up to them?”

Curator Kari Cwynar, who has curated the King Edward VII project and other public art programs for Evergreen, said in a statement that “our primary concern is ensuring that artists and audience members are safe, and feel safe attending the performance.”

As a result, on November 19, Evergreen will “have increased staff presence at the performance to ensure [safety], and a security plan.”

“The performance has so far been poetic and challenging and funny,” Cwynar adds, “and well-loved by audience members; these individuals’ presence won’t overshadow its success.”

Thinking about the conception, financing, and journey of the King Edward VII statue as a way to understand the ravages of colonialism 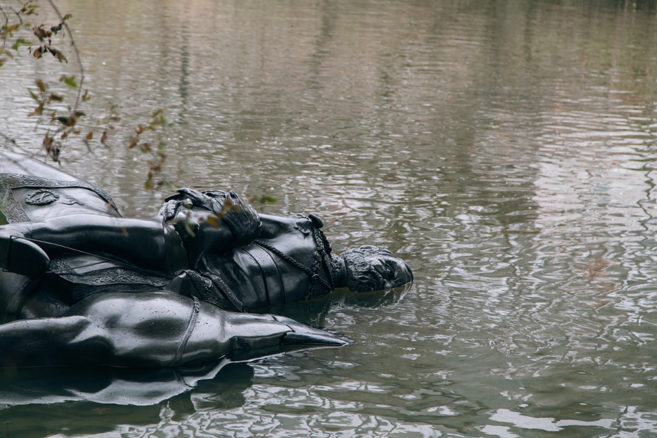 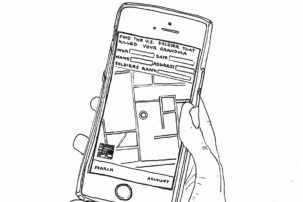 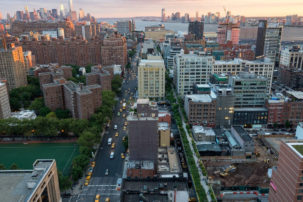 A Bit of the High Line Is Coming to Toronto 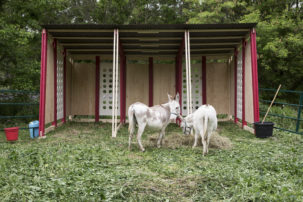 Donkeys in the Don and Other Temporary Acts

A conversation with Toronto curator Kari Cwynar about what we want, and need, from civic space—whether it's built or naturalized, domestic or wild