Xenofeminism and New Tactics for the Left 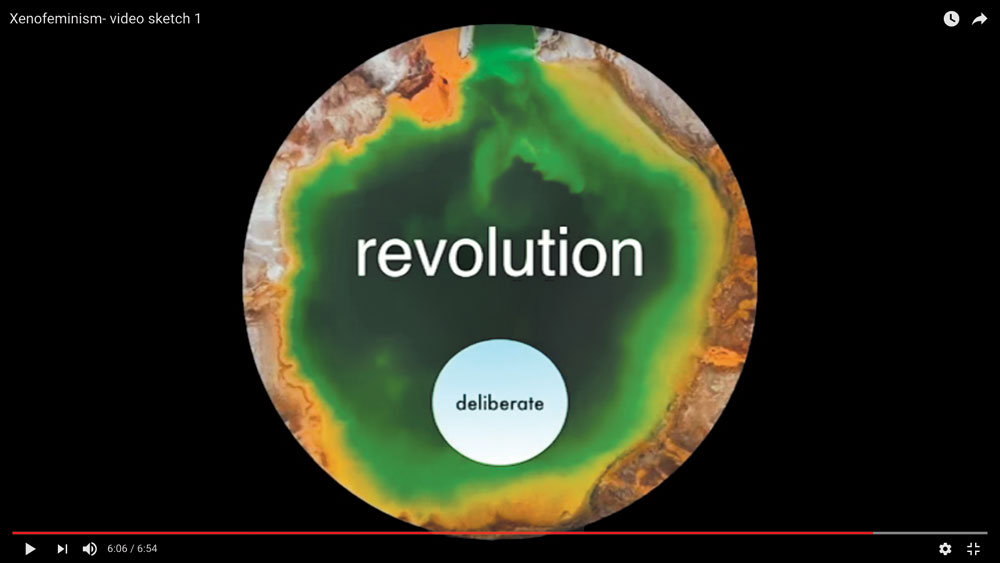 Still from the video adaptation of the Xenofeminist Manifesto , (2015) by Laboria Cuboniks member Diann Bauer

“Xenofeminism: A Politics for Alienation” is a multi-voiced manifesto authored by Laboria Cuboniks, the collective name chosen by a group of six women living in five countries—cyberfeminists, philosophers, social theorists, programmers, archaeologists and artists—who met at a conference in Berlin called “Emancipation as Navigation.” That was the only time they were all in the same room together.

The manifesto itself is challenging to parse. Typical of its form,the text breaks down into subheadings that mostly use aggressive, active verbs like “INTERRUPT,” “TRAP,” “ADJUST” and “OVERFLOW.” Xenofeminism in part aligns itself with accelerationism, which imagines the end of capitalism through the deployment of its own means, herein the attempt to unify the political left. Similarly, xenofeminism calls for using existing technology to re-engineer the world, while remaining cautious that “technology isn’t inherently progressive.” The manifesto is “vehemently anti-naturalist,” upholding “the queer and trans among us, the differently-abled, as well as those who have suffered discrimination due to pregnancy or duties connected to child-rearing.” It declares, “If nature is unjust, change nature!”

On Labour Day in Halifax, I met Lucca Fraser—a fellow Nova Scotian and member of Laboria Cuboniks, whose own research deals with network security, computation and artificial intelligence—to tease out the manifesto’s projections for our futures.

Merray Gerges: The manifesto begins by calling for the pursuit of action beyond what you describe as “fixed localities and fragmented insurrections.” Do you see these things as limitations of historical, even contemporary, feminisms?

Lucca Fraser: We definitely don’t want to make any grandiose claims like “All hitherto existing feminisms were bound to localism and fragmentary insurrections.” Feminism has made pretty sweeping, global victories over time. That goes without saying. So it’s more about trying to find what let that happen, what kind of relation to the local and global, to nature, to technology, to alienation, made that possible, and then trying to push harder in those directions. On giants’ shoulders, of course.

MG: Is that what you mean when you talk about the emancipatory potential of technology?

LF: I suppose it’s part of it. “The emancipatory potential of technology” seems like it couldn’t possibly be one, clearly defined thing. Technology reshapes the world, reshapes agency and the channels in the world that agency spreads into.

MG: Are you arguing for an explicitly feminist deployment of technology, since technology isn’t inherently progressive?

LF: Technology and major technological advancements are fascinating, and can completely change the playing field, but it would be naive to expect that that would always or even usually drive things in an emancipatory or feminist direction. It’s just that trying to suppress technological advancement in general—or even just ignore it—out of some Luddite anxiety will never really free us.

MG: The manifesto articulates its dissatisfaction with the wishful thinking and melancholic despair that have characterized many feminisms: fear of future success, inability to productively address challenges, desire for so much, yet doubts about how to build from that desire…

LF: There’s a very long tradition of feminists being chastened in the name of other, more so-called serious movements. Marxism, for example. There’s this constant, lurking suspicion that if you put feminism before anything else, you’re a traitor to whatever other causes are the real prestige-bearers. This is different, of course, from the feminist critiques that have insisted on the intersectionality of struggles, and those critiques are absolutely crucial. You can’t achieve universality without intersectionality. Intersectionality is what universality means. But that doesn’t mean that the rhetoric of intersectionality—just like the rhetoric of class struggle before it—can’t be exploited as a way of chastening feminism, or hinting that feminist ambitions are always suspect in themselves. It’s dicey. The left, especially the academic left, adopt a kind of modesty as a way of coping with catastrophic global failure.

MG: Is this what has led to the recurring fragmentation, and impotence, of the left? Not just modesty, but in-fighting?

LF: In-fighting is virtually a constant of human groups, I think. There’s a lot to say about that, for sure, and I think that some of the most interesting explanations for it come from mimetic analyses. The basic idea is that the left is characterized by certain behaviours, ideas and communicative strategies. But we’re not always too clear on the pragmatics. You’ve got to look at the reproductive strategies of the ideas and norms you promulgate. How do they breed? How do they influence their cultural environment so as to favour their reproduction? Not all memes do that, of course—but the ones that survive usually manage to. And that’s pretty much just straight up Darwinism.

MG: What’s keeping us from being clear on the pragmatics?

LF: A lot of the most popular discursive tactics on the left don’t really work all that well on anyone outside the left. I mean, who cares if you call out Trump? It’s sort of as if we’ve developed a lot of tactics that encourage imitation, on the one hand—sometimes as a defensive measure—but which don’t signal any kind of value, don’t win any social capital, unless they’re directed against those who are otherwise politically close to you. At the same time, you’re selecting for a right that’s totally immune to the left’s usual tactics—shaming, for example. The alt-right is pretty much just this. Which is almost inevitable, and which drives the left even deeper into these spirals of destruction. If you can’t shame the right anymore, but if shame’s your bread and butter, you’re just going to get hungrier and hungrier until you start eating your own side.

LF: Yes. Both literally and figuratively yes. That’s what tools are—they’ve got uses that go beyond their masters’ intentions. And they’ve got weaknesses that can be exploited to make them do things they weren’t intended to do. Which is basically what hacking means. This doesn’t mean we shouldn’t invent new tools. The more the better. But yes, absolutely, the master’s tools can dismantle the master’s house. How could they not?