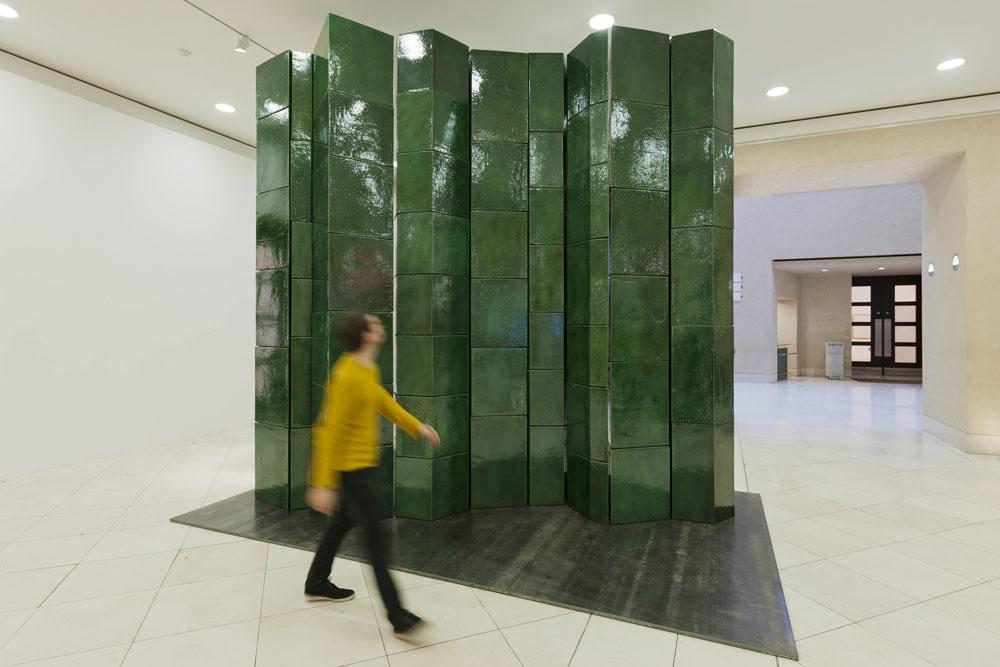 Still from Richard Deacon – In Between courtesy Bildersturm Filmproduktion.

Production still from Richard Deacon – In Between courtesy Bildersturm Filmproduktion.

British sculptor Richard Deacon says he wanted to retain a “bit of privacy” in the course of filming for a documentary about his work. Image from Richard Deacon – In Between courtesy Bildersturm Filmproduktion.

Richard Deacon is one of Britain’s greatest living sculptors. Winner of the 1987 Turner Prize, he is best known for his grand, “open” structures that stress material as much as the space it inhabits. His wooden sculptures are celebrated for their sublime, intricate twists and turns, the result of intensive planning, experimentation and fabrication. His public sculptures are numerous, and include Between the Eyes in Toronto at Yonge and Queens Quay. Recently, Deacon has turned to ceramics: his dramatic, 12-tonne work Fold, composed of 60 glazed bricks, currently sits at the Manton Entrance of Tate Britain, which opened a significant survey of his work February 5.

Deacon is also the subject of Cologne-based director Claudia Schmid’s new film Richard Deacon – In Between, which has its world premiere at the Reel Artists Film Festival February 21, where it will be followed by a live talk with the artist. The film is meticulous and intimate in its presentation of the sculptor’s practice. Here, Deacon discusses the making of the film—and reveals what he didn’t want Schmid to see.

DB: How did you encounter Claudia Schmid and decide you wanted to participate in this film?

RD: I work in Cologne as well as in London. My ceramic work is made in Cologne and Claudia is Cologne-based. She was interested in the ceramic work I’ve made as well as some of the wood works. She’s done films with other artists, and she came around and said she’d be interested to work with me for a film and gave me a couple of her films to me to watch.

It [Claudia’s proposal] occurred at a moment when I had some big projects: a retrospective, a public work and another possible work for an exhibition. It was three extended activities that allowed her crew to get into the rhythm of filming. We could tell her what we were doing. Filmmakers have a limited budget; they can’t just hang around!

DB: The film is an artist’s-process film. Were you aware of that going into it, and did you have any ideas, hesitations or missions around that?

RD: A film crew is a very intrusive thing and I had lots of hesitations. Obviously, during the filming, there were occasions when it was all too much. But Claudia’s not a particularly intrusive director. I got on very well with the second cameraman she used. I found him very sensitive in the way he looked.

You can see with directors, and particularly with cameramen, whether they’re looking and whether they’re interested. With photographers—I’ve had photographers ask me to stick my head through a hole [in one of my sculptures]. You kind of despair a bit at the poverty of people’s visions and imaginations, but then you get someone who’s really constructing shots very carefully. The cameraman was very quiet; although he shot far in excess of the time he needed, it was perfectly OK to have him around.

DB: The film appears to lay bare the practice of a contemporary sculptor and investigate ideas of authorship. There are all these scenes in the film of you intently studying and constructing maquettes. They’re very quiet. I know it’s hard to watch yourself on film, but when seeing this, did you have any epiphanies about how you work?

DB: The quality of silence is remarkable. It’s as if we can hear you thinking.

RD: What I wasn’t willing to show was my own physical construction of a large-scale work in the workshop. I haven’t ever wanted that; I want to retain that bit of privacy. There was quite a lot of pressure for them to have that moment in the film, and I knew they wanted that.

DB: It’s definitely not a performative, Picasso-with-Clouzot kind of thing…

RD: I didn’t want to be performative before the camera. And I think the film is better for that because the film has to work hard. And it doesn’t explain very much, which I think is nice in an hour-and-a-half film. It never actually tells you what we’re doing in Singapore [i.e., installing a commissioned hanging sculpture on the ceiling of a Louis Vuitton], or how that came about.

DB: The other character in the film is your primary collaborator-fabricator Matthew Perry, who is seen doing a lot of the constructing, although we don’t get a background as to how you met him.

RD: We’ve been working together since 1984. He had the studio next to mine and we used to do a lot of work. He started off by helping me out on a couple of things and we found it productive to work together and try to evolve a relationship—which isn’t that of an assistant to a master because actually, he’s a far better maker than I am.

Then we moved studios; he wanted his own practice to develop a particular kind of relationship to wood, and I thought that was a good idea. So when we first started working together, we worked in lots of different materials together, but he came to a point where he really wanted to focus on being good at doing one thing. It was around this time when I started working in clay, so my own interests were moving in a way that wouldn’t include him anyway.

DB: And it was with Perry that you developed this method of twisting wood into a helix…

RD: In the Tate show there is a work called After, which is a monumental, bent wooden work, and it involves an incredible amount of repetitive work. It involved six of us for six months, and when we finished, we said we were never going to do anything like it again.

The kinds of ways we then started to work with wood were to try to find ways we could bend it, but not in the same plane. So either putting a spiral twist in it, or as Matthew sort of invented, torquing a whole straight piece and twisting it round and round on itself.

The problem was in the air between us, and Matthew then went off and came up with some possibilities. I thought about a spiral bend, where one end finishes at a different plane to where it starts, but I actually hadn’t thought about twisting the ends about themselves. That is Matthew’s innovation. And it’s been incredibly productive.

DB: The film has a clean, contained and orderly tone, to the point where the scene showing Matthew twisting the wood is one of immense tension. The film shows quiet successes, and not a lot of failure.

RD: Filmmakers always like failures! I have reservations from my side about failures being filmed.

DB: Why is that? As an artist you seem very invested in process.

RD: I’m quite happy for failures to happen, and I can see where you’re coming from, but I’m not sure that they’re what I want to be filmed. Things do break. But I think of that as a by-product.

I’ll tell you a story. When we started twisting the ends and torquing the thing up, normally when you bend wood, you need to keep the length constant, in order to stop it from splitting—because wood doesn’t stretch, but it does compress. But if you’re twisting it, there’s actually no way you can do that. Inevitably, parts of the wood are twisting and parts are stretching. When we did this on small-section timber this wasn’t a problem. But when we became ambitious and started twisting larger sections of timber, they did begin tearing themselves apart down the middle because of the way the bits were moving. And then we’d have to do a lot of filling, or throw a lot of them away.

But then, instead of twisting a solid piece, we’d have a bundle and twist the bundle. The bundle itself would do the sliding; it wouldn’t crack; it would slide against itself. And to begin with we re-glued the bundle back into a single piece. Then we realized we could actually unpack it, and instead of having this twist as a single column, you had these twists that go through both a spiral and a twist. You get these strange curves. And then it can be reassembled in a different configuration. So you open up the centre of the bundle. So yes, a failure did lead to an extremely productive and creative and generative innovation: the pieces in Singapore, all those long twists, they’re all consequences of that solution to a failure. We never set out to make them.

Richard Deacon and Claudia Schmid will be present for a conversation and interview following the world premiere of Richard Deacon – In Between at the Reel Artists Film Festival on February 21. For tickets and more information, visit canadianart.ca/raff.