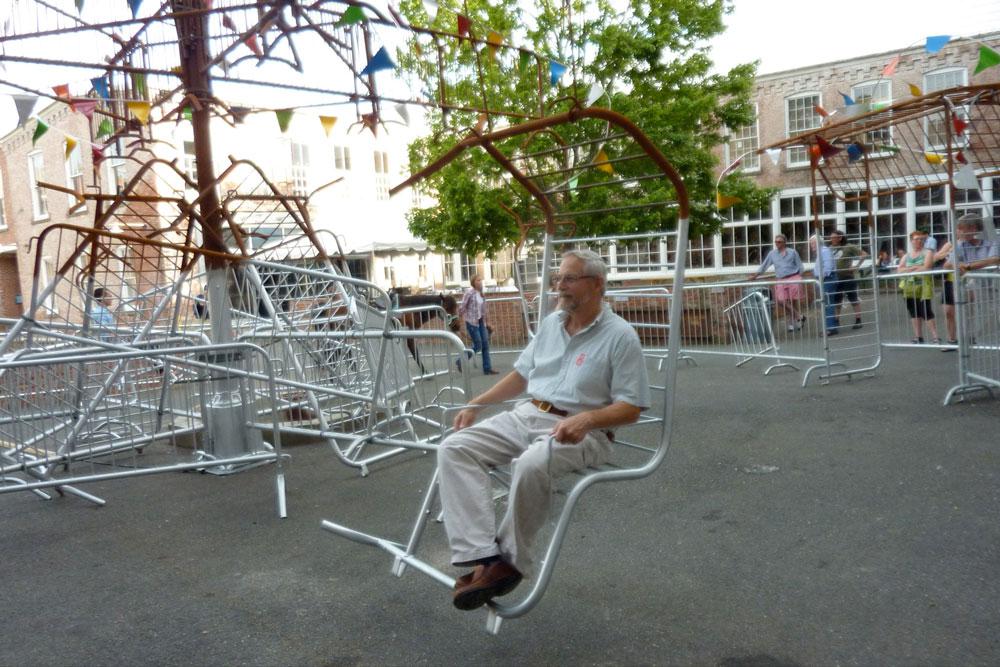 BGL Meatball, Tribute to the Group of Seven 2009 / photo BGL

The Canadian weekends of late summer and early fall are now populated with Nuits Blanches—all-night art events, with an emphasis on performance, installation and sculpture, typically occurring from sunset to sunrise. Following the lead of Montreal (which in 2003 started the first Nuit Blanche in Canada) and Toronto (which began in 2006), recent Nuit Blanches and Nuit Blanche–like events have cropped up in Halifax, Winnipeg, Guelph and, new this year, Ottawa and Calgary, the latter of which happens this coming Saturday, September 15. (Ottawa’s is on the following Saturday, September 22.)

Wayne Baerwaldt, director and curator of exhibitions at the Alberta College of Art and Design, is the founding curator of Nuit Blanche Calgary. He and many of the other stakeholders involved are taking the event as an opportunity not only to join a new-millennial art phenomenon, but also to reflect on why the event occurs at all, and how it can occur successfully.

For Baerwaldt, this reflection pivots on a conspicuous decision: to program six major pieces for the evening, instead of the dozens, indeed hundreds, that can cram other cities’ iterations of the event. Baerwaldt’s choices are Quebec collective BGL, who are building a carousel out of repurposed fences and barricades, similar to the one currently on view at MASS MoCA’s “Oh, Canada”; Calgary-based artist Caitlind Brown, whose interactive CLOUD will be comprised of 5,000 used domestic light bulbs; Calgary-based performance artist Emily Promise Allison, who promises a surprising, poetic, transformative action; Calgary collective Sophie Farewell, who will present stage sets on which “town criers” announce messages that viewers text to them; Winnipeg artist Noam Gonick performing as Bomb Shalom, a “candid news reporter” interviewing all audience members within reach; and British artist Theo Sims, with his interactive Candahar pub set in a wooden shack.

Earlier this summer, Baerwaldt chatted with Canadian Art about some of the ethical, logistical and artistic issues that came up while planning this Saturday’s event.

CA: How was this Nuit Blanche born?

WB: It came out of a conversation with Karen Ball, who was at Calgary Arts Development at the time and is now heading up Calgary 2012. She had heard that others were talking about having a Nuit Blanche here in Calgary, having seen the one in Toronto, and I think the one in Paris. And she suggested to local politico, D.J. Kelly, that he call me.

A lot of us at ACAD—Rita McKeough, Diana Sherlock and others—are talking about how we see art in public and private spaces here, and the existing, mostly quite conservative public sculpture in Calgary. We thought maybe we should begin a discussion that really critiques the concept of Nuit Blanche. We debated whether or not we should take on the name “Nuit Blanche Calgary.” It took some time to develop this discussion.

Finally, there was a poll taken by, I believe, Calgary 2012, asking the public what they’d really like to see… and I’m not sure if it was public art, but the top of the list for many respondents was a Nuit Blanche–like extravaganza.

CA: Part of the debate about the doing this event must have come from your own experience at Toronto’s Nuit Blanche in 2008, where you were a curator.

WB: The first thing we decided in terms of what we didn’t like about Nuit Blanche Toronto is the overbearing corporate branding by Scotiabank. Many of the artworks I remembered in Toronto in 2008 were impacted by the red-and-white way stations used for participant rejuvenation—or advertising, really. The over-branding of the event sure touched a nerve with artists involved, including Rita McKeough.

Also, Toronto’s remuneration for artists—$1,000, $500 in some cases—as an artist fee for a new work presented for 12 hours was insignificant.  In Calgary, we just thought we had to start at $5,000 and then negotiate the fee depending on many factors. Basically, our interest is in how the artists’ right to produce freely and their fees get considered in this whole process.

CA: Obviously this had an effect on the number of events you ended up programming.

WB: We are starting with a smaller footprint around Olympic Plaza in downtown Calgary. Instead of 500 events, we have six primary events. We want to extend this discussion around how we see something like Nuit Blanche existing in Calgary. There’s a very different understanding of contemporary culture here and one understands more about the culture when you realize people are rarely downtown for cultural events after 10 p.m.—certainly never after midnight. The downtown is thought of as dangerous after dark. The clubs and bars are open, but that’s about it.

So we wanted to change minds about staying downtown for a cultural experience after dark or after midnight. Most of us are interested in Nuit Blanche as an anti-spectacle—meaning we’re anti–soap bubbles and sparklers, the kind of hype and frothy entertainment that is included in the larger, more mature Nuit Blanche events. We want to engage an audience but we’re not going out of our way to amuse people. Some of our pieces, like Theo Sims’ The Candahar, are so subtle, in a way, the behavior of artists and audience so normalized: if you miss the fact that Chris and Connor Roddy are from Belfast and doing something unusual, being intimate with you, you’d sort of almost miss the point of this performance in a stark wooden shack sitting there in Olympic Plaza.

But to some extent, we’re using the first series of events as fodder for gossip to generate interest in the next incarnation, which will be associated with the Sled Island Music Festival. Looking into the near future, I think that’s our audience: a younger and also all-ages audience that stays out all night and is not afraid of the downtown after dark.

CA: Are you, in the vein of Nuit Blanche Toronto, encouraging events that fall off-grid or outside a sanctioned curatorial purview?

WB: We’re encouraging it now. Our budget is a little less than what we’d like it to be, but we are doing what we can to liaise with various communities and interest groups. First of all, we really wanted to see what a partnership between the ACAD and the city could look like before moving forward and inviting other participants in. We didn’t want to hit a sour note, and in retrospect the experience has been productive and about expanding the boundaries for artistic experimentation and innovation in the downtown.

Basically, the ideal is to be super-underground in the curation, to produce artist’s projects that ordinarily would not be presented, or to not do it at all. We are embracing all kinds of reconsiderations just the same: maybe Nuit Blanche has to happen outside the city, or in a massive park setting like Nose Hill Park; most of our program is performance-based—should it or could it remain that way in the future when such events become so all-inclusive and free-for-all? We’ve even thought about going to Forrestburg, Alberta, just south of a rodeo town called Bruce. Certainly next year it will be different. We don’t want to force it. We want to prolong the critical discussion at ACAD and beyond!