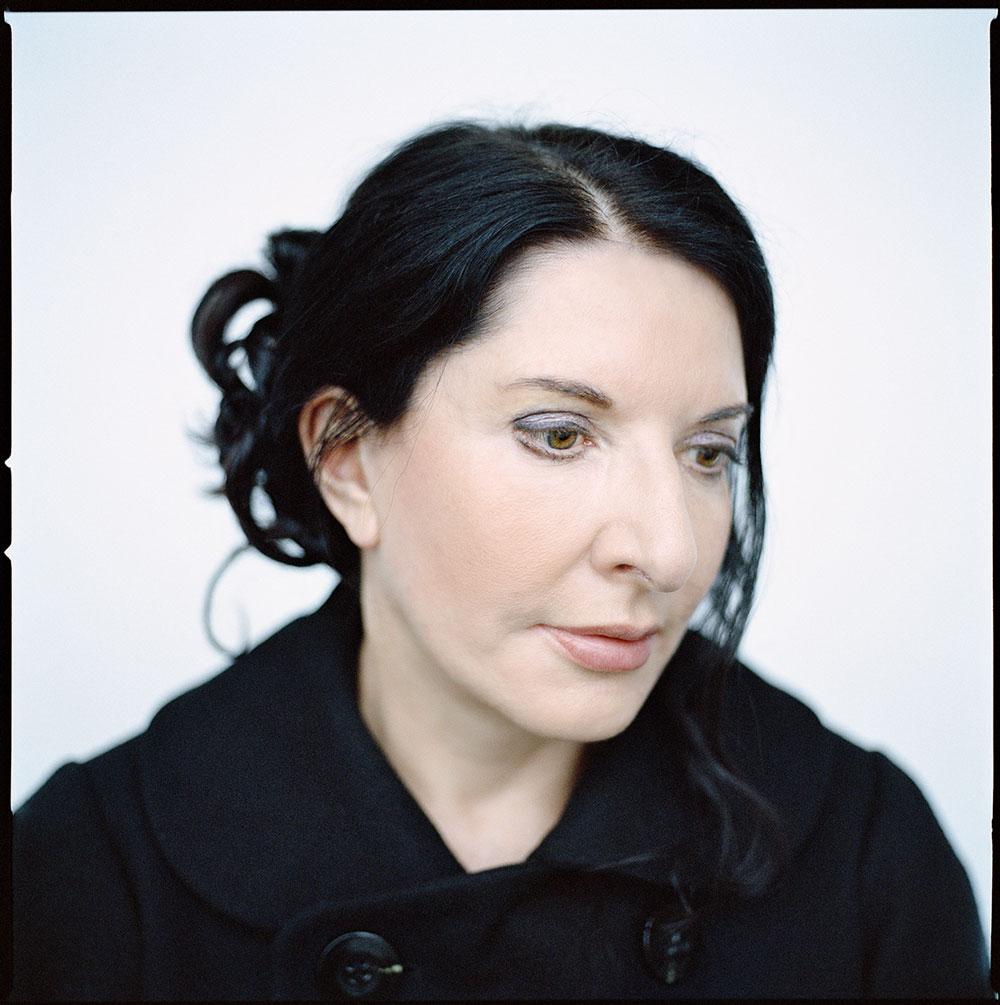 At age 66, Marina Abramović is thinking about what is, what was, what will be—and what might have been. The revered performance artist and bona fide celebrity is in Toronto to launch a number of works for the Luminato Festival: the North American premiere of Robert Wilson’s biographical “opera” about her, The Life and Death of Marina Abramović; a prototype in Trinity Bellwoods Park for her new Marina Abramović Institute for “time-based and immaterial art,” which promises to educate the public on, as well as preserve, her life’s work; and a lecture on her practice and said institute.

Currently in development in Hudson, New York, where Abramović lives, the institute is built on the artist’s own “method,” and indeed her dictum, “you give me time; I give you experience.” There, the public, artists and non-artists alike, will eschew cellphones and don lab coats, experiencing various time-based pieces. The project is still raising funds. The Luminato Festival (aided by a grant from a Dutch foundation, the Métamatic Research Initiative, to produce its prototype) marks its debut.

Our interview was a heated, quick talk on the durational experience in art: its virtues and lack thereof; its ambitions; and its institutionalization.

David Balzer: When I first found out about your institute I thought it was just for aspiring performance artists. It turns out it’s not only that: it’s for any artists practicing in a time-based medium, but also open to the general public. Anyone can participate. Why did you decide to make it so broad-ranging?

Marina Abramović: The first thing that’s important to me is this idea of legacy. Once I stood up from that chair at [the eponymous work for the 2010 Museum of Modern Art retrospective] The Artist Is Present, I knew I had to create a legacy. Everything I learned in 40 years of performance practice, I have to unconditionally give. I was doing this for young performance artists, and I had a performance group and we made a book and so on. Now I’m interested in a much larger arena—culture in general.

We start with Richard Wagner, 15 hours of opera. In the 1800s, he was already giving instructions to the participants as to how it should be performed, what food they have to eat, the intake of liquids, because they can never leave the stage. Then, music: Erik Satie. [For Vexations] there is the suggestion that he wanted the piece played 840 times in succession. It’s repetition-based. 1893. Then Karlheinz Stockhausen, 29 hours of opera. John Cage, 639 years. His piece [Organ2/ASLSP] is essential. A group started a performance of it in 2001 in a small German village, on an organ. The organ’s going to finish playing in 2640, after 639 years of playing. This is one of the longest durational pieces in history. Then we have La Monte Young, Pina Bausch, Douglas Gordon. Different categories: video, film, music, opera, performance and dance. Every category.

DB: I’m now thinking about the film critic Pauline Kael. I can’t remember what she said this about, but it was something along the lines of, “People think they like this movie, because they had to sit through five hours of it.” The argument is that when you sit through a durational work, sometimes you can’t separate your love of it from your pride in yourself for having endured it. You seem to think there’s a virtue in durational work, and going through its process, both as a viewer and as an artist. But is there a risk in holding this up as a virtue?

MA: This is totally not interesting in my case. Because it’s so different. First of all, you buy a ticket and go see a film. It’s five hours. You can leave if you want, but often you don’t, because you’ve paid for the ticket. In many instances of performance art, you are totally free. You can leave after five minutes if you want.

For The Artist Is Present, I told the public, sit in front of me for any amount of time you want. I had a person sitting seven hours—it was only one—but I also had people sitting three, four, five hours. People would just wait for hours, sleeping outside. I had people who just waited and never even got to sit. Waiting is a part of the piece, too. So it’s very different than this example of a movie. Why wait for so long for something that may not even happen? They come and take all the time they want. It’s up to them; it’s not up to me. And it’s very interesting—they can sit for it, but also there is a long line of people waiting. And they have the option of sitting shorter in order to enable other people to do it, too. But they take all the time they want. So they actually don’t care, socially, about the other people waiting.

There was a girl who came from Australia, I don’t know how many days she came, but she was never able to sit. There were always people sitting too long. And then she went back to Australia without sitting. She waited there for a week! So there are so many different elements. But this is more a question of what really happened when they were sitting there. Why couldn’t they leave?

DB: So there’s absolutely no ideal, in your mind, of what a participant can take away from a durational experience like this, or the institute?

MA: My focus is not on the people and what they are going to take away. My focus is on what I can give to them. In The Artist Is Present I was concerned that I could go through those three months and actually succeed without having major physical problems—I had them, but also that I could physically and mentally endure it. The thing is, for me what was very important was to be there unconditionally, in the present, the here-and-now. So that I’m not in my mind and you’re sitting there in front of me. You are the most important thing happening to me; every single person is there for just that moment. I was concerned only about that kind of delivery. They take whatever they take.

You know Rashomon, the wonderful Kurosawa movie: each character sees a killing happen and each sees something different and sits around the fire and tells different stories. They are projecting. What viewers are doing is not in my domain to predict. My thing is that I deliver 100 per cent of my energy to them. And they can do whatever they want with it.

DB: Obviously you’re concerned with legacy, with preserving not just your work as a performance artist but others’ work as well. At the same time, this thing is happening where so many people are going to school to be performance artists. There are master’s programs in which you can specialize in performance art, and your own work is being taught in the academy. What is your attitude towards the institutionalization of performance art, versus what you’re doing with your own institute?

MA: First of all, I left an institution. I taught for over 25 years at different schools. And I actually was the only artist in Germany, I think, who had a class called “Performance Art.” Because performance is so many things; it could be dance, theatre, stand-up comedy. You name it, it’s performance. But the type of performance art that’s really pure—I was the only one. And when I left, I understood that I actually had to create my own school. There’s no performance taught in its pure form. It’s always “photography, video and performance,” a mix of something.

My institute has a different mission. First you will have to sign the contract that you spend six hours there. Then you will go through different chambers which can always be changed, with different artists doing an experience. I’m about to work with Janet Cardiff, who is a great Canadian sound artist; I wanted to give her one space where she could create whatever she wanted. So there will be all these different collaborators.

But I will have this school. And this school will teach performance in its purest form, and long-durational performance. Because of all performances in all different forms, I’ve understood that this is the most beneficial to anyone I’ve ever taught. And the most difficult one and the most immaterial. You hardly need anything. When you are young you want to hide behind props, because you’re insecure. But the real, true performance is about transmission of energy, which is immaterial. And it doesn’t need story. And that’s so difficult to understand.

I could have never done The Artist Is Present when I was young. I had this knowledge, this state of mind that enabled me to do it. And now that I have it, I can teach it.

DB: What is the function of the prototype of your institute in Toronto?

MA: It’s essential, because I really have the first time here to see how it’s going to work in real life, and how people are going to react. Each participant has only two hours, but this version of the institute is mobile; I can move it anywhere in the world, and create the buzz and the experience. If people want more of it, they can go to Hudson, because there it’s six hours, and they can continue the experience.

One thing for me that’s really important is to study all communities in the past, such as Bauhaus: what happened when different minds came together, different cultures and spiritualities, in one space? You’re creating a new vision of humanity, a new culture. And that’s what I’m interested in. It’s not about performance; it’s much larger. Hudson is a small town. But it has every single problem that a big town has: corruption, racism, etc. These will be the first people who will be part of the institute. They will be my spokespeople. If I can change their consciousness, then we have made an entire city into a prototype. It’s a big image, not a small one.