How Joshua Schwebel Paid Interns with His Berlin Residency

Artist Joshua Schwebel explains how he used his residency at the prestigious Quebec Studio in Berlin to pay the interns at Künstlerhaus Bethanien. 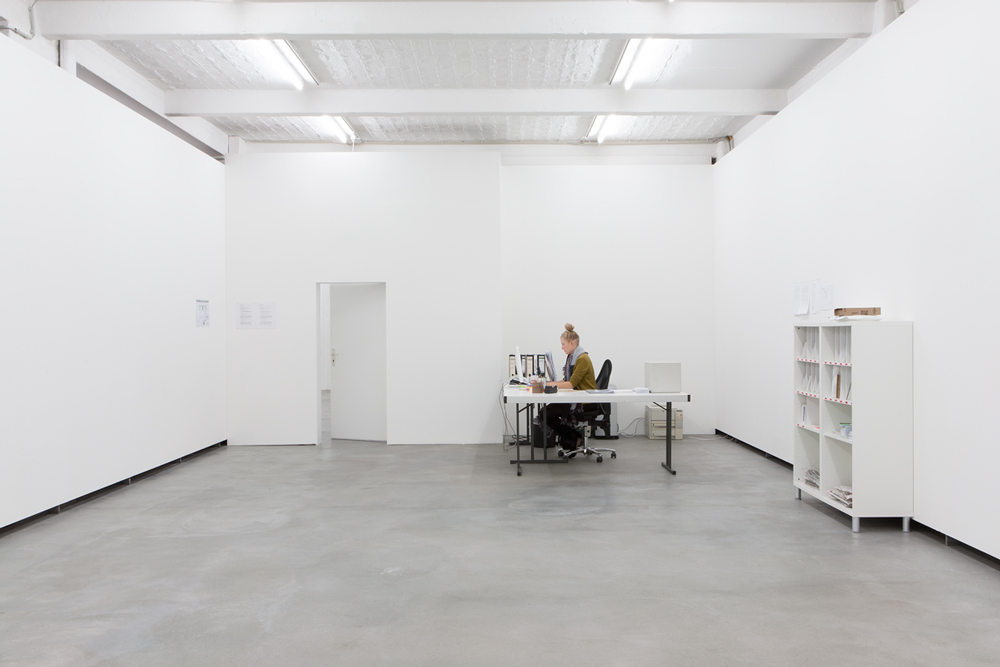 It’s what most contemporary Quebec artists dream of: the Quebec Studio in Berlin, a highly competitive residency program implemented in 2003 by the Conseil des arts et des lettres du Québec (CALQ) offering artists a live-work space for an entire year as well as an end-of-year exhibition at the beautiful Künstlerhaus Bethanien on Kottbusser Damm, between Kreutzberg and Neukölln.

The 2015 exhibition, running until November 1, features Subsidy, an unusual work by Joshua Schwebel. It’s comprised of an office space containing a desk, mail slots, and an intern—paid by Schwebel’s exhibition budget.

Accompanying the work is a letter Schwebel wrote to the artistic and residency directors in early July, which includes the following: “The KB institution and artists, myself included, are benefiting from the availability and necessity of passionate self-exploitation at the entry level of culture work. No other field so implicitly contradicts itself in declaring a culture of access, openness, and radical political critique, while ignoring and therefore obfuscating the growing gap between those who can afford to support their cultural commitments and those who cannot….”

David Balzer spoke to Schwebel over the phone about the origins of Subsidy, the opposition it faced, and the lessons he’s learned.

David Balzer: When was it clear to you that this was what you wanted to do as your project?

Joshua Schwebel: I started at the Künstlerhaus Bethanien in January, and this was not at all the project I had proposed. But when I’m put in situations where I’m embedded in an institution, I often look for other positions from which I can read it, and work with the rhetoric of the institution against itself. I’m particularly interested in value and in how art performs its own hypocrisy.

I’ve been working for a few years on this idea of labour and the value of my own work; I’ve been hand-making counterfeit pennies, a statement about my own sense of precarity and my feeling of how low the value of artistic labour is. When I got to the Künstlerhaus Bethanien it struck me that I was working in a space that had unpaid interns who were available to help me with my project. I felt uncomfortable with this and that lead to working in such a direct way to emphasize this discomfort.

Canada has a really outspoken and militant tradition that artists should be paid and that cultural workers should be paid. Being in Berlin and in cities where there is such a saturation of artists, where we’re undercutting each other just to get opportunities—I felt scared by that.

DB: What is the policy on interns and labour in Germany?

JS: I don’t fully know. They just passed minimum wage earlier this year. Part of the drama around my piece was that the director of the Bethanien argued that they’re not doing anything illegal in employing unpaid interns. They’re not, but that’s not really the point.

Many people have said, “Oh, you can’t do this because it’s exploitative or illegal.” My response is, “Right, okay, but paying these people to make work that is visible is somehow worse than the situation they’re in now?”

DB: What were some of the concrete steps you took towards realizing this project?

JS: I thought of the project mid-February. It popped into my head and I thought, “Oh god, this is something that I shouldn’t do, but I have to.”

I read my contract carefully, because I didn’t want to be kicked out. They needed 6 months to nullify it, so I just researched for the first six months and lay low. I read a lot about the relationship between art and exploitation, and labour and precarity. Then I wrote the letter that is in the gallery and I sent it by email to the artistic director and residency director and within 10 minutes I got a very explicit phone call from the artistic director. It was a crazy week and I had to contact CARFAC and CALQ and ask them about my rights. Things have since been resolved with the institution, but it was a really, really tense week.

The director initially reacted defensively: he said it wasn’t art.

DB: So the nature of the residency is that you propose a project and it has to be vetted?

The most extreme conflict would have resulted in the institution pressuring my funding body into pushing me out, and the funders might have chosen to protect the longevity of their investment in the studio.

Thankfully I didn’t actually have to go that route, because we had a face-to-face meeting and talked through it.

DB: And the funding body, were they always okay with this?

JS: They were pretty ambivalent, actually. The CALQ’s response was that I had to work it out with the director of the residency. In the end, the director trusted me, I guess. I explained things on the legal front to him; I explained that it wasn’t personal or about the Künstlerhaus Bethanien at all, but a large issue and that for them to show this work makes them look more politically engaged and contemporary.

I did a lot to rectify my relationship with the KB, and in the end they let me have the interns; all the office supplies were taken from their offices; the mailboxes were theirs. The way they have been flexible in the last few months has shown, in a way, what I want my critique to effect, because an institution that responds and is flexible and isn’t simply following a rote protocol.

My overall impression of working there has ultimately been quite positive. It was just their initial reaction that was really stressful for me, but also actually for them.

DB: Were any of the interns resistant or ambivalent about your plan? You’ve essentially put them on display.

JS: No, I talked to them really honestly about what I was doing. I wanted to know what they thought. As a participant in this project you’re both an object and yourself. I was open with them about my concerns that this was putting them on display, but I also said that I don’t want them to feel obligated to be there, but actually they embraced the project and have quite willingly and enthusiastically contributed to the work. I didn’t impose external obligations onto how they should act.

DB: There’s the danger that you’re just becoming the employer.

JS: I thought about that quite a bit. I’m making unpaid labour visible, and moving their labour from the office into the gallery and paying them for it, yes. So on the one hand I am paying them to be in the gallery and do work, but on the other it’s not work for me. It’s only work for me in the sense that it’s in a gallery and with my name. But the work they’re doing is work that they would be doing anyways, with no pay.

I’m all about ambivalence in critique. I don’t feel so bad about the contradiction of that gesture.

I don’t want to look heroic. That would be a construction, and was never my goal. It’s really about my relationship to the institution, and my role within this system. The point isn’t necessarily to remain in an oppositional stance, but to cause a reaction and a tension. The reabsorption always happens; that’s not a reason not to do it.

DB: Are you worried that people aren’t seeing your work as much as the other artists in the show? I had to ask where your piece was, not knowing anything about it, and then I got there and didn’t know what was your piece.

JS: The element of discovery is important. I’m interested in creating a separation in levels of access, so that the real public for the work is simply the institution, and then the artists working in the institution, and then the general public. The furniture, the people, all of that has a very different reading for the institution and the artists than it does for the general public. The furniture and the set-up come from the office upstairs, which is out of view, so when the artists come downstairs to the exhibition to get their mail, it’s kind of uncanny in the sense that is seems like a familiar space but it’s out of place. That level of intimacy won’t occur for the general public. I don’t mind concealing the work and making it unclear whether it’s an exhibition or not. If people miss it, that’s okay.

DB: What did you learn from this?

JS: The biggest struggle at first was feeling like I wasn’t doing anything because there wasn’t anything material accumulating in my studio. Since the opening, I have had the public acknowledge that the work exists, and have felt overwhelmed, and kind of proud of myself, because I did a thing! It’s really hard to feel like that when the work is so conceptual.

I’ve learned that I just need to stick with my gut, and not erode my own sense of what I need to do. It was hard to hold onto it through the whole year, and to feel like it was enough. I’ve had several members of the core staff come up to me and say that they really love my project—not just the interns, but the bookkeeper, in particular, said that nobody else has invested in the institution from this position and she feels like it’s a strong project.